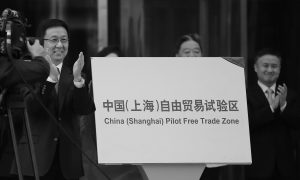 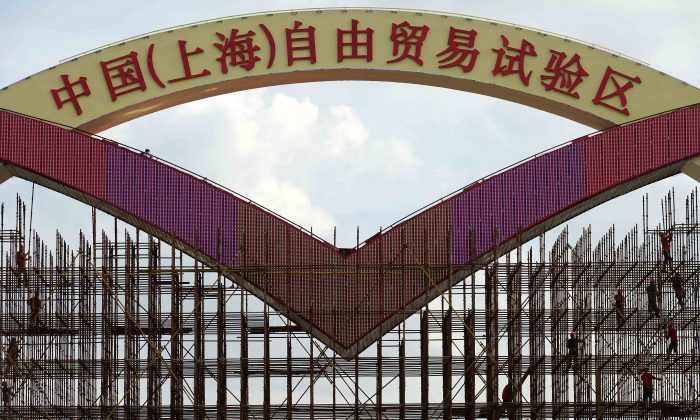 This picture taken on Sept. 23, 2013 shows laborers working on a large sign reading 'China (Shanghai) Pilot Free Trade Zone' on a gate of Shanghai Waigaoqiao Free Trade Zone (FTZ), before its formal launch in September 29. The free convertibility of the yuan inside the FTZ may trigger a wave of corruption and rent seeking by Chinese regime officials, argues Frank Xie. (STR/AFP/Getty Images)
Opinion

The free convertibility of the Chinese yuan is being tested

In August, China approved the establishment of the Shanghai Free Trade Zone (FTZ) and officially launched this testing ground on Sept. 29. It also released supporting policies, the most notable of which is the convertibility of capital accounts in Chinese yuan.

The FTZ involves reforms in investment, commerce, finance, and administrative law, according to media reports.

For the past three decades, China’s economic reforms have followed former leader Deng Xiaoping’s slogan “cross the river by feeling the stones,” using a step-by-step approach to make gradual progress. This pilot zone in Shanghai should be dubbed, “going to the sea by feeling the stones.”

Whether or not the Chinese yuan will succeed in the Shanghai FTZ will largely depend on how far the top leaders in Beijing dare to go.

Aiming at the Pacific?

Some analysts have suggested that the US-led Trans-Pacific Partnership (TPP) agreement was the motive behind Premier Li Keqiang’s cabinet endorsing the FTZ.

“The free trade zone will play a pivotal role in China’s negotiations for joining the Trans-Pacific Partnership Agreement. The zone can be expected to serve as China’s first window opening to the outside world after joining the TPP,” said Qi Xiaozhai, director of the Shanghai Commercial Economic Research Center.

Since Chinese authorities are concerned about possibly joining the TPP, the United States may not buy into the pilot zone—it is not designed for the whole country’s system yet.

If the authorities had made such a decision in the early 1980s, at the beginning of Deng Xiaoping’s economic reforms, the United States might have listened then. Today, as more truth behind China’s rapid economic growth, excessive social imbalances, and rampant political corruption has been uncovered, the United States and other TPP partner countries are not so willing to play ball with China.

With a population of some 23 million people and an estimated gross domestic product (GDP) of US$500 billion, Shanghai ranks among the top 30 economies in the world by GDP. Could Shanghai alone, an economic entity with capital-account liberalization, join the TPP? Truly accomplishing this would require completely segregating the Shanghai FTZ from the rest of China.

Skeptical economists point out that the Chinese leadership initiated the notion of convertibility in its capital accounts in 1993, but since then they have failed to follow through. The previous failure suggests that this pilot zone is being used to give the appearance of financial reform, but is really devoid of substance, according to Reuters.

By claiming that the Shanghai FTZ is a pioneer on the mainland of wider yuan convertibility and market-oriented exchange and interest rates, the Communist regime affirmed that its currency liberalization in the zone would create a more favorable economic climate for the country and the outside world.

In 2011, the first year of China’s 12th five-year economic plan (2011-2015), the authorities promised that the yuan would achieve “full convertibility” under the capital account by 2015 without setting any milestones to achieve this goal. More than two and a half years have passed, but the yuan convertibility is far behind schedule.

At this point, the reforms within the FTZ are just a test bed, but the chance for its expansion throughout the rest of the country is remote. Even if it can be done in the zone within a year, it will take at least a few more years to be replicated and popularized in other cities or regions. It’s very unlikely that the yuan convertibility plan will expand nationwide during the 12th economic plan.

A country unable to deliver on its promises is scarcely creditworthy whatever its form of state government.

Regardless of the intentions of Li Keqiang’s cabinet, the free exchange of the Chinese yuan will likely only help to facilitate hot money flows. Corrupt officials will be able to transfer assets legitimately; further exacerbating China’s ongoing hot money problems. Hot money is already moving almost unhindered into and out of the country through underground channels.

“It’s difficult to segregate the Shanghai FTZ from the rest of China. There will be money flows underground. It can be said that the FTZ experiment opens a hole in China’s capital account wall,” said Wang Tao, chief China economist at UBS, as reported by the communist regime’s mouthpiece Xinhua.

Many analysts warn that firms and governmental officials in the FTZ could abuse their privileges in order to profit from dealings with firms outside the zone in China, threatening the country’s economic growth and harming the welfare of Chinese households.

What does free yuan convertibility in the Shanghai FTZ really imply? The full realization of it will trigger a wave of more corruption and rent seeking by Chinese officials, leading to huge influxes of the yuan into the zone and large outflows of foreign currency out of China.

As this trend continues to grow, the Beijing authorities have only two ways to go: either put an end to this economic test ground by admitting their failure in “going into the sea by feeling the stones,” or split Shanghai from the country, making it become financially independent like Hong Kong.

For sure, the first outcome will bring shame and disgrace to the Chinese Communist Party (CCP) and the second may invite other provinces or cities to seek economic or even political independence, unequivocally resulting in the complete collapse of the CCP.

Translated by John Wang and Euly Luo. Written in English by Arleen Richards.