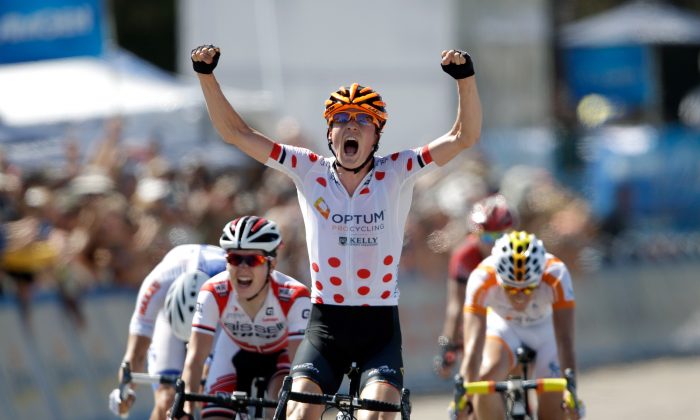 Will Routley of Optum p/b Kelly Benefit Strategies celebrates after he beats Gregory Daniel (L) of Bissell and the rest of the breakaway to win Stage Four of the 2014 Amgen Tour of California from Monterey to Cambria on May 14, 2014 in Cambria, California. (Ezra Shaw/Getty Images)
Cycling

The peloton gave Optum/Kelly Benefits rider Will Routley a chance at an early 23rd birthday present Wednesday, and the young Canadian capitalized, winning Stage Five of the Amgen Tour of California.

In a stage which was predicted by most to go to the sprinters, a six-rider breakaway was allowed to sneak after 16 km into the stage. Routley joined not hoping for a stage win but to gain King of the Mountains points to increase his lead in that classification.

As the stage progressed and Omega Pharma-Quickstep was forced to work alone on the pursuit, it became possible, then probable, then finally, in the last five km, certain that the peloton had waited too long.

The breakaway riders— Gregory Daniel (Bissell,) Christopher Jones and Jonathan Clarke (UnitedHealthcare,) Kevin De Masmaeker (Novo Nordisk,) Matt Cooke (Jamis-Hagens Berman,) and William Routley (Optum/Kelly Benefit Strategies)—worked together, with only minimal sparring, saving their energy. They entered the final five K with over a minute gap, and by then they knew that the stage would belong to one of them.

The pair of UHC riders made a few small attacks around three K, trying to gauge who had the legs; Kevin De Masmaeker pulled them back, looking like the strongest of the breakaway riders.

Or, maybe the most confident, but not the most cagey. Both Routley and 19-year-old Bissell rider Greg Daniels saved themselves until Masmaeker made his own attack 400 meters out. This was too far for the Novo Nordisk rider—Routley blazed past him in the final 100 meters with Daniels close behind.

Mesmaekwer had to settle for third behind Routley and Daniels; but even a podium was probably much more than he expected on this day.

As for Routley, likely he had planned to drop back to the peloton after conquering the day’s last climb some 40 km from the finish, but when he saw the gap and the disorganization of the peloton, he decided to press on. His gamble paid off; not only did he stretch his lead in the KoM competition, he won the stage—nine days before his 23rd birthday.

Three teams really lost out in the stage: Cannondale, who wanted to give Peter Sagan a chance to sprint for a win, Giant-Shimano, who was sure their sprinter, John Degenkolb, had the speed to beat Mark Cavendish, and Omega Pharma-Quickstep, who wanted to lead out Cavendish for a second sprint win and to increase his lead in the points classification.

Giant -Shimano and Cannondale refused to join the pursuit with any real power because, in their eyes, they would have been helping the competition; they wanted the Omega leadout train to be as tired as possible for the finish, to increase the other teams’ chances of beating Cavendish.

Cavendish still beat the rest across the line, but he was racing for seventh. Sagan managed eighth, and Degenkolb had to settle for a disappointing 11th.

Stage 5 has a lot of climbing, but only a single categorized climb, the Cat 1 San Marcos Pass 30 km from the finish. This 174-ikm stage will likely not upset the GC; there are a few small hills in the final kilometers which could launch a small attack by a few young riders eager to gain fame, but none of the GC leaders are likely to get away for the final 30 km.

After their failure in Stage Four, it is highly unlikely that the sprinters’ teams will let anyone get away in Stage Five; there are only two more sprint stages after Stage Five, And after the climbing of Stage Six, all the riders will be tired by then.