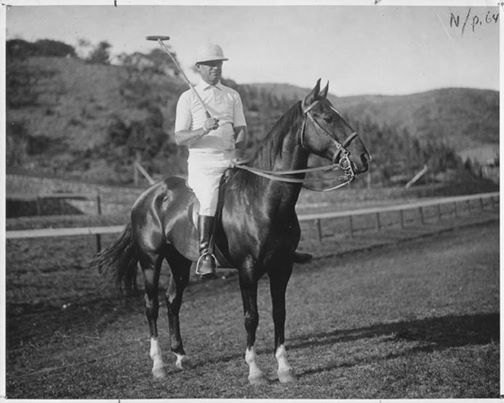 The accomplished Will Rogers was a movie, star, political commentator, pilot, and skilled Polo Champion too. Image: Will Rogers Museum
News

Will Rogers Is Still Relevant

Talk about your over-achiever. Will Rogers was an acclaimed pilot, polo player, trick roper, cowboy, vaudevillian, and Broadway star. Born in 1879 on what was termed ” Indian territory” in Oologah, Oklahoma, he was a real cowboy who roped and rode the range of his family’s spread the Dog Iron Ranch. It was here he learned the cowboy way and was taught to rope and respect good men of all color by a freed slave. Although his family was well-off  and he lived in a fancy house known as the “White House on the Verdigris River” Will was always proud to be the descendant of a  Cherokee chief.

Mr.William Penn Adair Rogers  known popularly as Will Rogers, was a highly paid radio commentator, newspaper man, political commentator and speaker. His observations are fresh and  still relevant today,  so reading  and a few of  this  ” Cowboy Philosopher’s”  sayings  you might not know they are from a ten year span in the mid- 1920’s to the mid-1930’s and deal with everything from daily life in the United States, to greed, politics- covering presidents Coolidge, Hoover and Roosevelt, war and the human condition.  He skillfully turns and twists the logic with his homespun sense so that you are forced to see the absurdity. What is so interesting is that no matter how far we have come from Will’s time to present, the issues remain.

” You know you can be killed just as dead in an unjustified war, as you can in one protecting your own home.” May 26, 1929

” I don’t care how little your country is, you got a right to run it like you want to. When the big nations quite meddling then the world will have peace.” Aug. 9, 1933

” We will never have true civilization until we have learned to recognize the rights of others.” Nov. 18 , 1923

“We will never get anywhere with our finances till we pass a law saying that every time we appropriate something we got to pass another bill along with it stating where the money is coming from”‘  Feb 12, 1932.

In fact this wise man who had a way with the turn of a phrase is so revered that there is a place to study his body of work, an estimated two million words. The Will Rogers Memorial and Research Center is part of the Will Rogers Museums which are open to anyone interested in this American folk- hero. you can make arrangements to visit the ranch house Will Rogers Birthplace Ranch 9501 East 380 Road, Oologah, OK, and the Will Rogers Memorial Museum, 1720 West Will Rogers Blvd., Claremore, OK. open every day of the year 8 am to 5 pm.

As a fitting tribute to another special man, a showing each day of  a Robin William movie will take place the entire month of September.