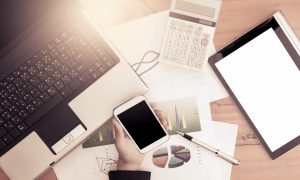 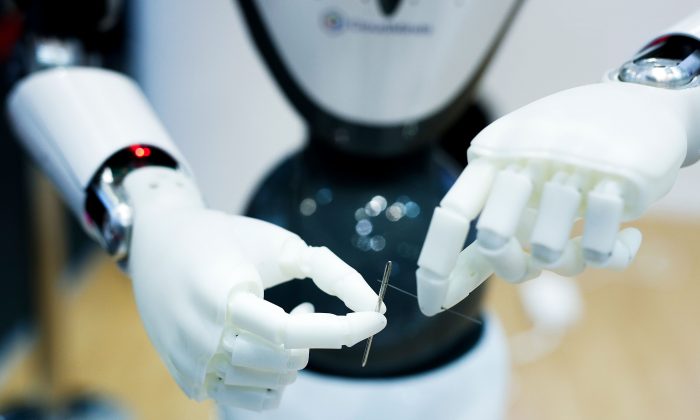 A CloudMinds robot uses a needle at the Mobile World Congress (MWC) in Barcelona on February 26, 2019. PAU BARRENA/AFP/Getty Images)
Viewpoints

A perennial source of angst in the United States is concern about job security and job opportunities. Most of us have been unwillingly unemployed at some point. I know from personal experience how awful that can feel.

Quite common today is the fear that technological progress will render our jobs obsolete. Lurid headlines like “Robots will take our jobs. We’d better plan now before it’s too late” fan those fears.

There is some truth in such reports, even if the alarmism is overwrought. It’s undeniable that robots will displace some workers. They already have, as you can tell by viewing photos or video footage of a modern automobile assembly line. Robots are simply a continuation of the long-term trend for machines to perform functions that required human labor in the past. Indeed, mechanization, aka “labor-saving devices,” have been replacing, supplementing, and reconfiguring human labor for the past few centuries.

Mechanization has been a boon on the macro level, even as it has often been a bane at the micro level. For individuals, having to change jobs can be inconvenient, often painful, and occasionally tragic. For society, technological progress and mechanization have produced standards of living that would have been unimaginable to our ancestors.

Farming is the prototypical example of the economic effects of mechanization. As machinery did more and more of the work that used to require human labor, the percentage of Americans working on farms inexorably shrank decade after decade. Two centuries ago, approximately 80 percent of Americans lived and worked on farms. Now, less than 1.5 percent of Americans are needed to produce all the food we need (with much left over for export).

We may surmise that millions of Americans have had their lives turned upside down when mechanization pushed them out of farming. But the labor that was no longer needed in agriculture was redirected into producing new and additional goods and services in other fields of endeavor—from engineering to art, from construction to health care, from entertainment to digital goods.

As farm jobs dwindled in number as a result of mechanization, America grew vastly richer. Yes, economic progress has been accompanied by growing pains, but few would wish to return to the relative poverty of yesteryear.

Today, the official U.S. unemployment rate is near half-century lows of 4 percent. That is welcome and encouraging, but it doesn’t mean that everything is hunky-dory in the labor market. There is a national, indeed global, problem of employers having difficulty finding workers with the right skills. Certainly, our colleges and universities could be doing a much better job of equipping their customers (pupils) with marketable job skills. Those factors, combined with the accelerating pace of technological progress—especially the rise of robots—mean that finding or keeping “the right job” will remain a challenge for many Americans.

The search for suitable employment will prove especially challenging for those who have little to offer employers other than physical labor. Clearly, robots will continue to supplant humans in factories (and maybe in laboratories, offices, etc.) just as backhoes have greatly reduced the demand for humans digging with shovels.

Indeed, it seems humane for machines to take over “grunt work”—tasks that are tedious, repetitive, and backbreaking. For humans to be stuck doing grunt work is a waste of intelligence and potential. Ironically, Marx and other socialist writers in the 19th century condemned that type of mind-numbing, soul-killing, “alienating” labor, while Marx’s intellectual heirs on the left today often complain when “greedy corporations” add machines that liberate mankind from such dehumanizing drudgery. You just can’t satisfy leftist utopians!

As I’ve written before, nobody knows the future, not even the experts. Predictions about the impact of robots on employment vary greatly. For every pessimistic headline warning that robots will take our jobs, you can find an optimistic headline explaining, “Why machines will help humans, not replace them.”

Gonzalo Schwarz of the Archbridge Institute think tank surveyed various studies about the anticipated effect of automation on future unemployment and found a wide disparity. Some estimated that almost half of jobs were at “high risk” of being replaced by machines in the next two decades. A more recent study by the Organization for Economic Cooperation and Development projected a much lower rate of job loss—only 10 percent. A 2018 study by the World Economic Forum painted a much rosier picture of the impact of robots on employment, guesstimating “that robots will displace 75 million jobs globally by 2022 but create 133 million new ones—a net positive.” Other studies, including the World Bank’s World Development Report 2019, conclude that the overall effect of technology on job opportunities will be slight. Warning: You can’t take any of those predictions to the bank.

So, are robots a threat to jobs? Yes and no. Yes, robots will displace many workers (although in many cases, workers will keep their jobs and work in partnership with their mechanical co-workers). But no, machines aren’t going to render human beings unemployable. That fallacy is at least as old as when the Luddites in England sabotaged machines two centuries ago. As then, so today, machines and technology result in the evolution of human employment into new forms rather than the end of it.

As machines increasingly do the heavy lifting (often literally) and dull, monotonous tasks, human beings will have the opportunity to do work that makes greater use of their intelligence and personal attributes. We don’t know what those jobs will look like—indeed, technological progress will spawn new types of jobs for which we don’t even have names yet—but we can be confident that there will always be a demand for human energy and intelligence. Why? Because of human nature.

We humans rarely are completely satisfied; we almost always yearn for something more. That implies an unlimited economic demand for people to work to satisfy those yearnings. Even if we humans arrive at a state of satiety in terms of having all the material gizmos and gadgets we want (a highly dubious proposition), there will remain an open-ended demand for new and improved services to be rendered.

It won’t always be a smooth process (human progress rarely is), but as machines liberate humankind from drudgery, human ingenuity and creativity will devise new goods and services that provide ample opportunity for human beings to obtain gainful employment. Robots and other changes will cause the market for human labor to continue to evolve, but the need for human labor will never end.