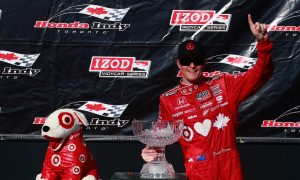 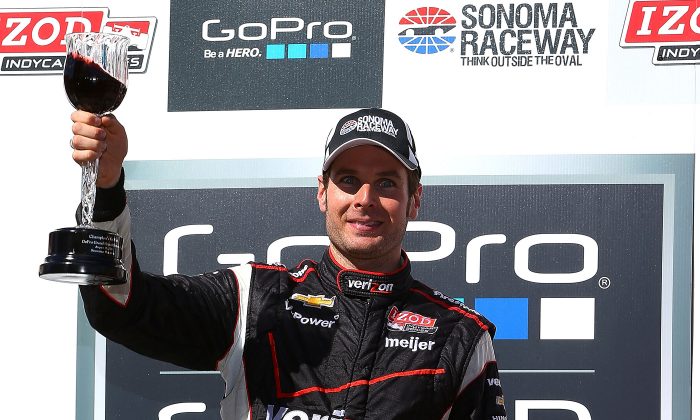 Will Power, once one of the most serious threats to win any IndyCar race and certainly a number of championships, must have through a lot about what went wrong through the last year-and-a-half.

It had been that long since the Team Penske driver had stood atop a podium—Power won the Sao Paulo 300 on April 29, 2012, and hadn’t won a race since.

Sonoma was a good track for him; Power had two wins there, in 2010 and 2011, but to win this year he would need to beat Team Target Ganassi, with four-time IndyCar champ Dario Franchitti and two-time champ Scott Dixon—and Dixon had been on a roll, winning three of the last four races.

When Franchitti and Dixon qualified one-two, it seemed that Will Power might have to wait another race to get a chance at a podium.

Instead, the totally unexpected happened. Scott Dixon, so cool under pressure he is sometimes called “The Iceman” (possibly also a reference to the original “Iceman,” F1’s Kimi Raikkonen,) the most calm, self-possessed of IndyCar drivers, got overexcited and made a dangerous error which handed the race to Will Power.

The race had been a hectic affair, with blocks of several laps of fierce racing interspersed with caution periods, a record-setting seven in the course of the race. Between teams trying different tire strategies, different fuel strategies, and the frequent collisions the first third of the race was too disjointed to predict who might finally come out ahead.

On the lap 35 restart, after four cautions, Scott Dixon made a courageous pass on Justin Wilson, going around the outside through Turn One to take the lead. Wilson and Dixon were on different fuel strategies; when Wilson pitted for a refill, Will power moved up behind Dixon. These two were on identical tire and fuel strategies, and they were very fast.

Power pitted first, on lap 44; Dixon a lap later. The Ganassi driver rejoined the race right in front of Power, and did some amazing driving on cold tires and full tanks to keep his Penske adversary behind him. Power tried so hard to catch Dixon, Power went wide at Turn Seven two laps later and Let Justin Wilson back by him.

Wilson, on the softer, quicker Red tires, did his best to get by, but Dixon, on Blacks, managed to hold him off until Wilson had to pit again on lap 61. Then it was Dixon and power again, both on Blacks, both with about the same fuel load, and both very fast.

Aon lap 64 Joseph Newgarden went off the track and stalled. He couldn’t restart, so another full-course caution was called to give safety vehicles a chance to retrieve him.

Dixon and Power dove for the pits, hoping to get in before pit lane closed, and they succeeded. Power pulled into his stall, with Dixon in the stall behind him, for the pit stops which would determine the race: with th two so closely matched, whichever one of them got out first would almost certainly be able to stay ahead of the other.

Dixon’s crew was quicker, and finished chancing four tires and fueling their car a second quicker than their rivals just ahead. Scott Dixon stood on the gas and blasted out of his pit box—but in his eagerness, he ran through the corner of Will Power’s pit box and clipped a tire being carried by a Penske crewman.

The tire, hit by a 650-horsepower car under full acceleration, slammed into the body of the crewman, and sent the crewman flying like bowling pin into one of the other crew members. And air gun somehow got launched, which hit a third.

Amazingly, no one was severely injured; ice and analgesics will manage the damage. But Dixon, leading the race and certain of his fourth win in five races, was penalized and dropped to 21st place.

Had Dixon won the race, he would have been second in points, only eight behind leader Helio Castroneves. Dixon eventually finished fifteenth, and ended up 39 points back, still in second place but not nearly as much a threat, particularly with only four races left in the season. Scott Dixon’s third IndyCar title might have slipped out of his grasp as he slid through Will Power’s pit box.

As for Will Power, he finally got another win, though not the way he would have wanted it. He is eighth in the standings, 123 points back, with no chance of winning his first title this year. Every win is welcome, and Power certainly needed one, but he didn’t earn this one; whether it boosts his confidence, whether it provides him with any satisfaction, remains to be seen.

After the race Power was more grateful that his crew members were not injured than happy he finally ended his win draught. Maybe he was distracted, or maybe this win wasn’t quite as sweet, since it was given rather than earned.

Power has four more chances to win on his own terms this season. The next the IndyCar Grand Prix of Baltimore, comes on September 1st. Tickets are available through the GrandPrixofBaltimore website.