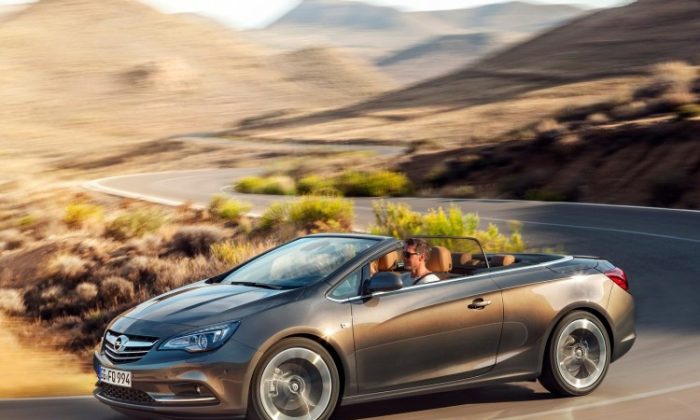 Will Opel’s Cascada Lead to a New Buick Riviera?

GM’s European subsidiary, Opel, just announced the addition of the Cascada four-seat convertible to its lineup.

In the old days, nobody in America would have cared much. However, Buick’s lineup is increasingly lightly-facelifted versions of the cars Opel sells abroad.

Check the Verano, Regal, and Encore crossover as proof. Enthusiasts have long wanted another Riviera to give the luxury brand a little flair. A Buick version of the Cascada would be right at home here in Mother America.

The Cascada is stunningly beautiful with its flowing lines, crafted interior, and tightly-cinched canvas roof that can be raised and lowered at speeds up to 50 km/h (about 31 mph).

It is essentially a Verano convertible and looks the part, but heated/cooled Nappa leather seats, elegant body sculpting, and dash coverings pieced together with French stitching are decidedly more upscale.

The overall affect is an expensive-feeling car, which is good because it would have to compete with the VW Eos, Chrysler Sebring, and BMW 1-Series.

“Most convertibles look good with the top down, but many seem clumsy with their roof up. Thanks to its high-quality, aerodynamically clean soft top with a perfect, seamless profile, the Opel Cascada also cuts a fine figure when closed,” says Malcolm Ward, Director Exterior Design, in describing the new convertible.

Opel will offer two versions of its 1.4-L turbo-4 engine, generating up to 140 hp, and a 170 hp 1.6-L Turbocharged ECOTEC 4-cylinder engine with a choice of 6-speed manual or automatic transmissions.

If the Cascada transforms into a Buick, expect just the 1.6-L unit, although a 6-speed manual would not be out of the question given its availability in the current Verano and Regal.

If GM has plans to sell a new Buick Riviera—and if it is it sure isn’t sharing the idea with journalists—pricing would likely start in the $35-40,000 range. Let’s keep our fingers crossed. Buick needs this car.