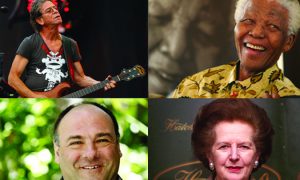 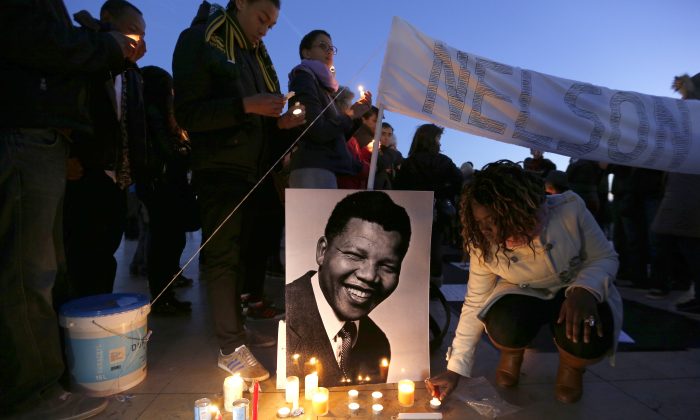 A woman lights a candle next to a portrait of late South African President Nelson Mandela during a tribute to Mandela on the Parvis des droits de l'homme (Human Rights square) in central Paris on Dec. 15, 2013. (Francois Guillot/AFP/Getty Images)
Nelson Mandela

As the body of Nelson Mandela was heading for its final rest in the rural community where he was born, reverential exhilaration was turning into emotionally draining reflection tinged with criticism and self-criticism.

Mandela has moved from a person into a historical figure, as in, “Now he belongs to the ages.”

In the world at large, this final Mandela moment has been bathed in media attention as have earlier spectacular events like his release from prison and inauguration as president. This time, there were more than 2 billion social media references leading to a growing backlash of negativity from those who never supported him in the first place, as if the events were a distraction from the daily news parade of war, economic decline, and political scandal.

Despite his death, this saga is largely considered positive—good news in a sea of bad. You can be sure that once he is in the ground, all you will hear from media mavens is We did Mandela—next.

Wrote the Daily Mail in London, a newspaper that has over the years disseminated nasty and questionable criticisms of Mandela (even as in the ’30s it was worshipful of fascists): “While some reflected on the remarkable life of Nelson Mandela, some world leaders saw it as the perfect opportunity to grab a quick ‘selfie’ with their peers—prompting a backlash from Web users accusing them of undermining the seriousness of the event.”

Mandela’s African National Congress was more upset that when its leader, Jacob Zuma, was booed while Zimbabwe’s Robert Mugabe was cheered.

Beyond the coverage of the formal events—the talkathon by world leaders and related pomp—you did get a sense of the genuine affection in which the man they call Madiba is held by most South Africans. Former labor leader Jay Naidoo wrote to me and others:

“I found the spirit of Madiba amongst the ordinary people in the queues that went to pay their respects. There were no dignitaries and celebrities here. Just the people Madiba loved, black and white, young and old, even the infirm had travelled hours and days to join the somber lines that snaked around the streets, through parks and stadiums to pay their final respects. They were here to reclaim the legacy of Madiba and reignite his courage and fearlessness to demand the promise of freedom now.”

At the same time, more and more critical voices began to surface, and not only on the left website where he was faulted for various betrayals and not leading the socialist revolution they hoped for, or on the right where they “always knew” he was nothing but a “communist terrorist.”

In South Africa, some writers like Mark Gevisser, who wrote a biography of Mandela’s successor Thabo Mbeki, saw the memorials as also mourning the death of idealism in what used to be called “the beloved country.” He editorialized in the Mail & Guardian:

“This is a consequence of the way Mandela’s legacy has been popularized: the world’s embrace of him only as an icon of forgiveness and reconciliation—of love—rather than also as a fierce combatant for justice who turned to forgiveness and reconciliation because he understood it as the best route to the liberation of his people. It took Barack Obama, of all people, to remind the world of the latter.”

Others, like labor columnist Terry Bell were willing to lash out at the “deification” of Mandela, noting, “As everyone from monarchs to the laboring masses this week sought to share in the Mandela memorial moment, the myth machine went into overdrive, the very machine Mandela had so disparaged when I sat with him in his Johannesburg office in 1992. One sentence he uttered then has resonated with me throughout the years: ‘I am no messiah.’… The virtual deification of Nelson Rolihlahla Mandela, would almost certainly have been anathema to the man.”

I have seen several articles referring to Mandela as an aristocratic democrat who pumped out plenty of myths himself to motivate his country to take the path of reconciliation.

Unfortunately, in his desire to pump money for jobs and services into his country, he mellowed his approach to economic policy, embracing the markets and sucking up to big business that rarely honored their promises to him.

In the research for my book “Madiba AtoZ, The Many Faces of Nelson Mandela,” commissioned by the producer of the movie “Mandela Long Walk to Freedom,” I heard many stories of Mandela’s pragmatic right turn away from nationalization and strict regulation of big business for fear that they would alienate the country from the West.

This troubled many in the ANC, like Ronnie Kasrils, a former commander in the ANC’s armed struggle who became minister of intelligence, who now scolds his comrades for not holding firm as poverty and inequality remains pervasive.

“What I call our Faustian moment came when we took an IMF loan on the eve of our first democratic election. That loan, with strings attached that precluded a radical economic agenda, was considered a necessary evil, as were concessions to keep negotiations on track and take delivery of the promised land for our people. Doubt had come to reign supreme: we believed, wrongly, there was no other option, that we had to be cautious, since by 1991 our once powerful ally, the Soviet Union, bankrupted by the arms race, had collapsed. Inexcusably, we had lost faith in the ability of our own revolutionary masses to overcome all obstacles. Whatever the threats to isolate a radicalizing South Africa, the world could not have done without our vast reserves of minerals. To lose our nerve was not necessary or inevitable.”

This, too, is part of the Mandela legacy that does not feature in the coverage, and hence, what conversation there has been around it.

When he spent those long years in prison, photos of Mandela’s image were strictly prohibited in South Africa. Most of the world media did not press his jailers to give them access, and went along with the prohibitions. Censorship there was accompanied by self-censorship here because media outlets feared they could be denied access when and if things began to change.

Africa has never been covered fully or fairly, and that is unlikely to change. Wrote former ANC Leader Pallo Jordan in South Africa’s leading business newspaper: “South Africa will not experience such a proud moment for a lifetime or two! Not only does this moment demonstrate the tremendous goodwill South Africa enjoys, thanks to Mandela, it is also a symbolic expression of the world community’s unmistakable endorsement of the achievements of South African democracy.”

Yet, many Western countries whose own democracies are being challenged don’t want this spectacle to go on too long; it could inspire more activism of a kind that is being suppressed in countries like the Ukraine, China, Egypt, and Turkey. (It shouldn’t be surprising that leaders like Netanyahu and Putin were no-shows at the memorial.)

You can bury people like Nelson Mandela but you can’t bury their ideas and triumphs.