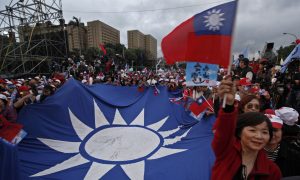 Will Madonna Be Forced to Make a Public Confession for Wearing the Flag of Taiwan?

In her “Rebel Heart” World Tour held at the Taipei Arena on Feb. 4, pop star Madonna appeared onstage draped in the flag of the Republic of China (ROC), more commonly known as Taiwan. The flag is controversial because it defies the mainland Chinese regime’s demand for the recognition of only one China—the communist People’s Republic.

Madonna’s appearance with the flag, which generated plentiful online discussion, comes just weeks after 16-year-old Taiwanese pop idol Chou Tzu-yu made a public apology for holding up a photo of herself raising the ROC flag. It is widely believed that she was pressured by her employers to make the statement so as to appease mainland China.

Taiwanese fans applauded Madonna, but reactions across the strait separating China and Taiwan were not so warm.

Taiwan has been separated from mainland administration since 1949, when the communist regime defeated the legal ROC government and drove it to Taiwan.

Many Taiwanese sang to the tune of “Taiwan is the Republic of China, not part of [the People’s Republic of] China,” as one comment read. Others pointed out that the flag Madonna used was not a pro-independence flag per se but simply the flag of the ROC, which still officially lays claim to its pre-1949 territory.

Visiting foreign stars must tread lightly, as DJ Mary Mac became aware of when he shouted, “I love Taiwan! I love China,” at a concert in Taiwan. This receiving an awkward silence from the crowd, and later he posted an apology on Twitter: “To the people of Taipei, you have my apologies. I was distracted by the amazing energy tonight that I mistakingly insulted you all.”

Another comment sarcastically downplayed the incident, saying that the ROC flag was “simply the regional flag of the Taiwan Special Administrative Region, don’t make a fuss of it.”

“Special Administrative Region” is a mainland political subdivision used in reference to Hong Kong, Macau, and, at least on paper, to Taiwan.

The Taiwanese singer Chou Tzu-yu had waved an ROC flag along with that of South Korea on a Korean TV show. The video of her confession, available on Youtube, generated outrage among many young Taiwanese.