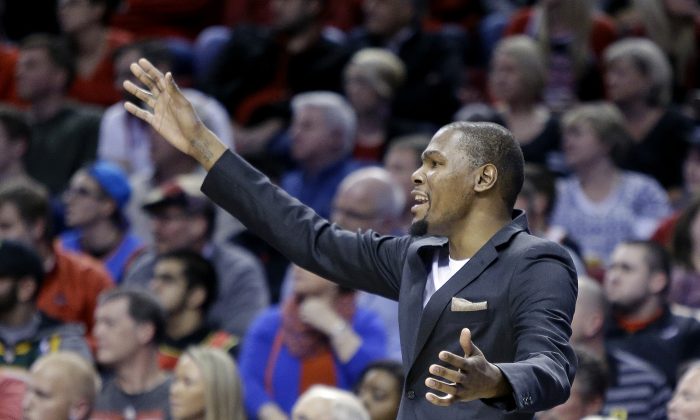 Oklahoma City Thunder forward Kevin Durant, who did not play, reacts from the bench during the second half of an NBA basketball game against the Portland Trail Blazers in Portland, Ore., Friday, Feb. 27, 2015. Portland beat Oklahoma City 115-112. (AP Photo/Don Ryan)
NBA

Will Kevin Durant Return in Time for Thunder to Make Playoffs?

Kevin Durant is slated to return from his latest injury in a week or two, but it might not be soon enough to help ensure the Thunder don’t miss the playoffs.

Coach Scott Brooks said on Wednesday that Durant will return in “a week or two,” the same day that the Thunder lost to the Clippers, a team that Oklahoma City handily beat 124-114 with Durant in early February. Durant dropped 40 points that game.

In Durant’s absence, Russell Westbrook has stepped up his strong play even more, asserting himself in the MVP race and regularly recording triple-doubles. And the Thunder have gone 6-3 without Durant. But it might all the effort may end up in a startling conclusion–missing the playoffs.

Ever since Durant and Westbrook returned from their first injuries this season, many predicted that they’d eventually make their way into the top eight seeds. The Thunder were second in the West last season after all. But the Pelicans continue to confound expectations, and moved into the eighth spot when the Thunder lost on March 11.

This race looks like it could very well go down to the last game, and even end in a tie. If that indeed happens, the Thunder will miss the playoffs entirely since the Pelicans hold a 3-1 head-to-head tiebreaker over them.

Let’s say Durant returns in one-and-a-half weeks. He’d miss the Thunder’s next five games. By the time he returns, the Thunder will only have 13 games left. Is that going to be enough time to drive a wedge between them and New Orleans?

There is one other factor in the equation that remains to be fully determined. The Dallas Mavericks have fallen to the seventh seed after going 5-5 in their last 10, and are now just four games ahead of the Pelicans and the Thunder in the loss column. The probability is very low, but if the Mavs can’t get it together, New Orleans and Oklahoma City might just both make the playoffs.