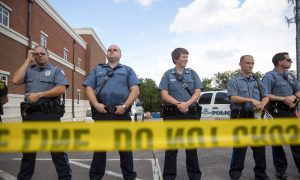 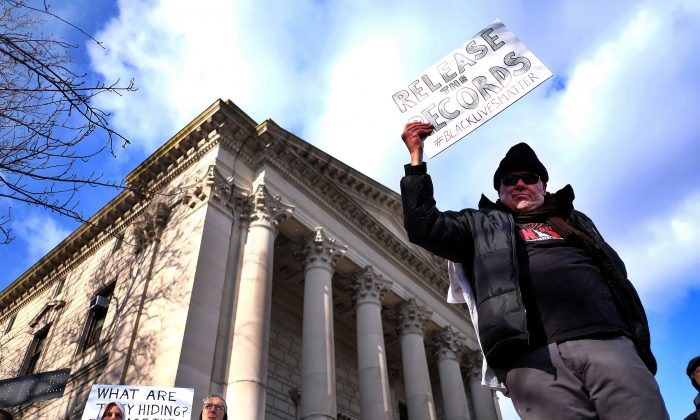 Protesters display a banner and placards during a demonstration outside the courthouse in New York's borough of Staten Island on January 5, 2015. (Jewel Samad/AFP/Getty Images)
US

While Ferguson, Mo., searches for a replacement for disgraced former municipal Judge Ronald Brockmeyer, the Honorable Roy L. Richter of the Missouri Court of Appeals, Eastern District, will hear pending and future cases from the Ferguson court.

Before Judge Richter was temporarily transferred to take on cases from the troubled and corrupt Ferguson Municipal Court, he had a record of overturning unfair policies like the ones that plagued Ferguson: in 2013, he ruled against the use of red-light cameras in nearby Arnold, Mo., concluding that the city installed the cameras to generate revenue by imposing fines on car owners.

In a recent scathing report investigating the abusive practices of the Ferguson Police Department and municipal court, the U.S. Department of Justice (DOJ) determined that Ferguson authorities’ policy of issuing arrest warrants and heavy fines to mostly black residents was discriminatory. Residents were often fined for minor city code violations like jaywalking charges and traffic tickets.

The court was found guilty of pressuring police officers to write up citations on its residents, and then slapping on additional fees when they could not make their payments in time or failed to appear for a court hearing.

At the helm of the Ferguson municipal court was Judge Brockmeyer, whose emails revealed that he colluded with court officials to dismiss traffic tickets that he himself or Ferguson police officials accrued.

On Monday, Brockmeyer, who serves as a prosecutor in Vinita Park and Florissant, and a judge in Breckenridge Hills, resigned from his position as Ferguson’s municipal court judge, according to a report by the St. Louis Post Dispatch.

Brockmeyer told the Dispatch that he did not believe the allegations in the DOJ report were true, and that his main reason for resigning was because he and his family had received death threats in the days since the report was released.

Richter has previously ruled against unfair law enforcement policies that were mainly established to generate revenue for the local government. In December 2013, he decided a case brought by residents of Arnold, Mo., who alleged that the city’s use of red-light cameras to detect license plates of vehicles that ran red lights and then issue a summons to the owners of the vehicles—rather than the drivers of the vehicles at the time—was violating the vehicle owners’ rights to due process.

When the primary and fundamental purpose of an ordinance is revenue-generation, such ordinance cannot stand.
— Roy L. Richter, judge, Missouri Court of Appeals

Richter wrote in his opinion that the city’s policy did not have public safety in mind, since the actual driver who ran the red light was allowed to remain on the road, while the owner of the car was presumed guilty. The city contracted with the company, American Traffic Solutions Inc. to provide the cameras, giving 33 percent of each ticket fine (each ticket was $94.50) to the company.

“Why would a municipality enact an ordinance that levied a fine/penalty sufficient so that the municipality could permit a nongovernmental, profit-making company to siphon off a third of the revenue generated?” Richter asked in his opinion. “The answer to each of these allegations would seem to favor generation of revenue as the primary purpose of the ordinance. When the primary and fundamental purpose of an ordinance is revenue-generation, such ordinance cannot stand,” he added.

Richter is expected to take over Ferguson’s cases beginning next Monday. It remains to be seen whether he will rein in the excessive, revenue-generating fines in Ferguson like he did in Arnold.

But as chair of the Municipal Judge Education Committee—a group of judges tasked to train new municipal judges—Richter will surely play a critical role in ensuring the next Ferguson judge doesn’t engage in unconstitutional or corrupt practices.

The committee is scheduled to hold a certification test and training session for all new municipal judges in April, including an hour devoted to teaching ethics, according to a January court memo from Richter.

The Supreme Court of Missouri wrote in their Monday press release announcing the transfer of jurisdiction that they are also giving Richter the authority to reform court policies and procedures in Ferguson, “to ensure that the rights of defendants are respected and to help restore the integrity of the system.”