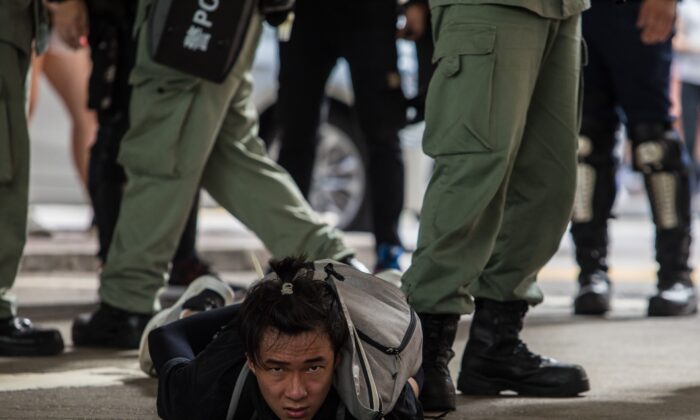 Riot police detain a man as they clear protesters taking part in a rally against a new national security law in Hong Kong on July 1, 2020, the 23rd anniversary of the city's handover from Britain to China. (Dale De La Rey/AFP via Getty Images)
Thinking About China

Will Hong Kong Turn Into a Modern Version of ‘The Killing Fields’?

Beijing’s national security law has turned Hong Kong into a place of terror, which reminds me of a modern version of the Oscar award-winning film “The Killing Fields.”

I was just a teenager when I first watched this British biographical drama in the mid-1980s. It was difficult to fathom what “the fall of a country” would mean for Cambodia under the communist dictator Pol Pot’s reign of terror in the 1970s.

As I revisited the movie recently, I gained a new perspective—it warned me of the worst-case scenario of how Hong Kong could end up if Beijing took total control of the city. The Chinese Communist Party (CCP) and the puppet Hong Kong government officials won’t be ashamed to destroy the core values of the once famed global financial hub—its freedom of speech, freedom of press, freedom of expression, and the rule of law—in order to silence all opposition voices, at all costs.

In fact, Hong Kong has been in crisis for more than a year since Beijing implemented the national security law, and the suppression of the city’s freedoms has just gotten worse.

“The Killing Fields,” which is based on a true story of an American journalist and a Cambodian interpreter, won three Oscar awards for best supporting actor, best cinematography, and best film editing. It was about the Khmer Rouge regime in Cambodia in the 1970s, when civil war and carnage ravaged the country that was subsequently cut off from the outside world.

The 1970s was an interesting time—a golden print media era—when Polaroids were used for instant pictures and newsmen were respected. In real history, back in April 1975, as the American Embassy staff was evacuated from Cambodia, the American journalist, who was mentioned in the movie, left the capital city of Phnom Penh before its fall, leaving behind his Cambodian sidekick interpreter.

April 17, 1975, was a significant day to remember for the Cambodian people—the Khmer Rouge, the Cambodian communist forces, seized the nation’s capital and civilians thought that they brought peace. But nothing could be further from the truth. Hope quickly turned into fear across the country: Many Cambodians who had supported the old regime—the Khmer Republic—were purged and executed by Pot, the Khmer Rouge regime’s ruthless leader. As a result, a nationwide genocide of 1.5 to 2 million Cambodians—the mass murder of one-fourth of the country’s population—ensued from 1975 to 1979.

Recently, I had a strange dream about Hong Kong. Many people, foreigners and locals, were jammed inside and outside of the U.S. Embassy compound on Garden Road. These people took over the streets in a massive assembly and were about to be attacked by the soldiers. As Hong Kong declared martial law, those who supported democracy would be punished, tortured, or quickly executed. While U.S. military helicopters were being deployed for a rescue mission, the soldiers were firing warning shots in the air to scare off people on the ground waiting to be rescued.

These soldiers then went past the gate of the building of the U.S. Embassy, facing the U.S. marines head-on. But nobody dared to fire the first shots. Meanwhile, more people were rushing toward the U.S. Embassy in an attempt to board the helicopters. The airport was locked down; all the sea routes were blocked with “Coast Guard vessels” everywhere.

The number of soldiers grew into the thousands around Garden Road and Central. They all cocked their guns and were ready to pull the trigger as they waited for the final order, but they were outnumbered by the tens of thousands of Hongkongers. Then all of sudden, the sky turned dark while a gigantic IMAX dome-shaped screen appeared in the sky. Several scenes of actual events that occurred during the pro-democracy movement from 2019 to the end of summer this year were being shown on the huge screen: peaceful marching demonstrators, geared-up protestors dressed in black, undercover police disguised as pro-democracy protestors, and the raided Apple Daily office. As the soldiers were about to start firing shots, they all suddenly fell on their knees and dropped their weapons, signifying peace with the people.

Then I woke up from that vivid dream, back to reality.

As we look at communist-ruled Hong Kong today, we see that the level of uncertainty continues to grow as Hongkongers surrender or leave the city. Under the draconian national security law, people have lost their rights to hold an assembly or to protest.

Hong Kong has fallen and lost its freedoms. Outspoken Hongkongers are now censored, silenced, or arrested by the authorities. We have all witnessed how rampant police brutality has become in the city. Recently, the concert of pro-democracy activist and singer Denise Ho was cancelled. And more censorship and suppression in Hong Kong are expected to come.

The ruthless Chinese regime has been trying everything possible to incarcerate Hong Kong citizens. But Hongkongers should not give up and must keep on fighting for their survival.

Edward Chin
Follow
Edward Chin (錢志健) runs a family office. Chin was formerly Country Head of a UK publicly listed hedge fund, the largest of its kind measured by asset under management. Outside the hedge funds space, Chin is the Convenor of 2047 Hong Kong Monitor and a Senior Advisor of Reporters Without Borders (RSF, HK & Macau). Chin studied speech communication at the University of Minnesota and received his MBA from the University of Toronto. Twitter: edwardckchin Youtube: Ed Chin Live Facebook.com/edckchin Email: edckchin@gmail.com
edwardckchin