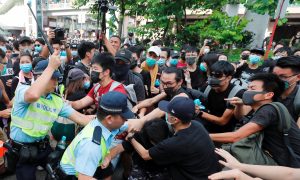 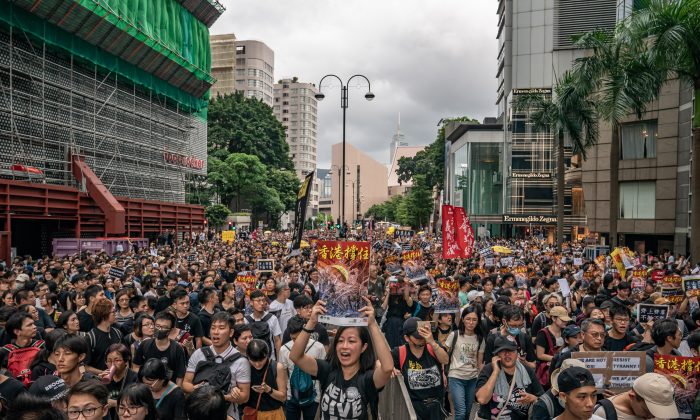 Protesters hold placards and shout slogans as they take part in a rally on a street on July 7, 2019 in Hong Kong, China. Over 230,000 people rallied at Kowloon on Sunday as pro-democracy demonstrators have continued on the streets of Hong Kong for the past month, calling for the complete withdrawal of a controversial extradition bill. (Anthony Kwan/Getty Images)
Thinking About China

As violent protests continue, how will Xi Jinping respond?

How will the Hong Kong protests turn out? The situation there remains fluid and unpredictable.

Should the estimated two million protesters call the postponement of the debate on the Beijing-backed extradition bill a victory and go home?

The extradition bill is the Beijing-imposed Article 23 National Security Law, would have enabled the Chinese Communists Party (CCP) to capture suspects and take them to Beijing for trial. But now that the protesters have won that battle, what’s next?

Could the protesters even stop the momentum of the movement if they wanted to do so? Maybe. But even if they could, at this point that seems unlikely to happen.

The Protest Is Evolving

Now into the seventh week of the protest, violence is escalating and protesters are calling for “an end to police brutality,” with placards about an “Independent Inquiry For Rule of Law.”

That’s laudable, but they’re not likely to get support from the government. Hong Kong Chief Executive Carrie Lam, very publicly bowed toward Beijing when she described the protesters as “stubborn children.”

That’s not a good sign for the near future. Nor is the recent presence of riot police along with violent, white-shirted, club-wielding attackers assaulting the protesters. The latter are reported to be part of the Asian mafia known as the Triads, are pro-China and acting as proxies for the CCP.

A shift in the nature of the protest itself is underway, and its impact is now of a much larger scale. Underlying the protesters’ anger is a rejection of the CCP and their attempts to eliminate the speech and political freedoms that Hong Kong has enjoyed for over a century. The protesters are, in their words and actions, posing a direct threat to the CCP and Xi Jinping’s rule and authority.

A Big Problem for Beijing

Xi Jinping has several competing interests to balance. Some of those include maintaining political control within the CCP, combatting the trade war with the United States and shoring up a contracting economy, while at the same time delivering on his promise to the world to open up more of China’s market. In the meantime, he has to keep Hong Kong on a short leash, lest the appearance of weakness prompt protests to erupt elsewhere.

But as the protests continue, Xi may feel forced to put an end to their dangerous defiance of his authority very soon. In fact, he may already be telegraphing his intentions.

China’s official People’s Daily newspaper featured a commentary entitled, “Central Authority Cannot Be Challenged,” labeling the protests “intolerable.” That appears to be a warning to protesters and, perhaps, even to Carrie Lam.

On the other hand, according to a CCP insider speaking to The Epoch Times, Xi has issued three rules regarding the Hong Kong situation, banning:

Will Xi stick to this edict?

Reports that Beijing has told the United States that its Hong Kong-based military forces will not take any action seems to validate the insider’s information, as does the use of proxies and non-lethal riot control weapons by the police.

Still, comparisons to Tiananmen Square are being drawn. Is that realistic?

For six weeks in the spring of 1989, pro-democracy student protesters gathered in the now-infamous square to denounce the corruption of the Party and rally for a more economic and political freedoms. Their aim then was to topple Chinese communism and replace it with democracy.

The CCP leadership knew that it had to snuff out the liberty aspirations of the emerging middle and wealthy class youth in China or the Party would be finished. But they also knew that they had to give something to the people in exchange for crushing the freedom movement.

The offer was clear cut: The CCP would allow greater economic freedom and opportunities in exchange for taking political freedom off the table.

Hong Kong bears similarities to the Tiananmen Square revolt in some obvious ways. Protesting the oppression of the CCP is the common thread. But in 1989, the students were trying to throw off the yoke of dictatorship. In Hong Kong, they’re resisting putting it on in the first place.

The End of “One Country, Two Systems?”

Xi Jinping’s recent comments seem to extend special treatment given to Hong Kong and Macau. His statement recognized the “unique and irreplaceable” status as key factors in China’s economic growth and in its relationship to the rest of the world.

Yet Xi insists that both must recognize Beijing’s demand for “national security.” He seems to be offering both a greater role in China’s relations to the world, but to gain that, they must first submit to his absolute authority. Macau is much further down that path than Hong Kong.

It’s not clear that anyone in Hong Kong takes Xi at his word. Except, perhaps, Chief Executive Lam. She must surely understand that the protests put her political career in jeopardy. Her own credibility is not very high in Hong Kong, either.

What seems more apparent is that the “one country, two systems” concept may be reaching its inevitable breaking point. The protesters realize that they’ve reached the legal point of no return, and are fighting to keep their rights.

No doubt that Xi understands that as well. But he also knows that if he can’t control Hong Kong, then he’s not fully in control of China. The protesters’ attack on Beijing’s Hong Kong Liaison Office on July 21, the symbol and property of the CCP, underscored that point.

But rather than take the protest movement head on, Xi has decided to blame it on American interference. That’s the standard procedure when the CCP is in conflict, even if they’re unable to explain how or why America has done so:

“We can see that the U.S. officials are even behind such incidents,” Chinese Foreign Ministry spokeswoman Hua Chunying said on July 23. “So can the (U.S.) officials tell the world what role did they play and what are their aims?” Hua asked.

There are, however, bright points in the Hong Kong drama. For one, Xi Jinping finds himself in a lose-lose situation. A hardline approach will further damage an already fragile economy, not to mention his standing around the world. But a softer approach conveys weakness, which hurts him as well. Either could damage his standing within the Party.

There is also a particularly welcome light in this potentially very dark scenario. The Taiwanese know full well the brutality of the regime that Hong Kong protesters may soon be facing and have courageously offered political sanctuary to the protesters.

They may need it sooner than later.