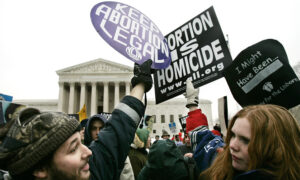 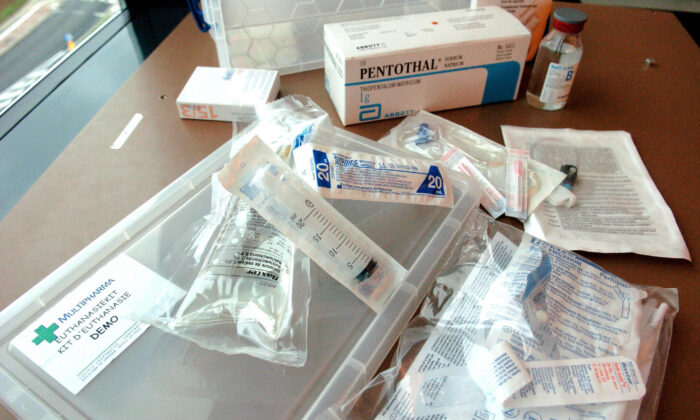 A "euthanasia kit" available in the 250 Belgian Multipharma's chemist shops for general practitioners who want to practice euthanasia at patients' homes, in Brussels, Belgium, on April 18, 2005. (Etienne Ansotte/AFP via Getty Images)
Viewpoints

Will Doctors Be Forced to Violate the Hippocratic Oath?

For 2,500 years, doctors have taken the Hippocratic Oath, promising to “do no harm” generally and pledging—in its original rendering—not to perform abortion or assisted suicide, specifically.

Times change, as the old saying goes, and the law has changed with the times. Today, abortion is legal throughout most of the West. Assisted suicide and/or euthanasia has become a trending social movement, now legal in several countries and by statute in eight U.S. states and the District of Columbia.

Meanwhile, doctors remove healthy organs in “gender reassignment” surgeries or inhibit normal puberty in children as a treatment for gender dysphoria, which many doctors consider doing harm. Given these cultural and legal changes, it’s hardly surprising that most doctors no longer take the Hippocratic Oath.

These important comity-protecting “medical conscience” laws are under mounting threat. Nice, polite Canada, of all places, is leading the anti-Hippocratic Oath charge. Most recently, Delta Hospice, a 10-bed facility in British Columbia, created a public and official uproar when its board of directors refused to permit lethal injection euthanasia—this, even though as originally conceived, hospice care required suicide prevention rather than facilitation. (In British Columbia, religiously affiliated hospices can refuse euthanasia, but not secular facilities such as Delta.)

So adamant was the health minister that Delta allow its patients to be killed, he stripped all provincial funding from the facility—even though there’s a hospital next door where Delta patients can readily go if they want a lethal injection. In the latest anti-Delta move just this week, a court prohibited Delta from having a members’ meeting to approve changing its affiliation to Christian from secular in order to avoid the euthanasia mandate.

Think about this for a moment: Rather than permit a tiny hospice to opt out of killing, the British Columbia government would rather that patients who seek traditional hospice care not have access to Delta’s facilities because of stripped resources. No wonder they call it the culture of death.

Matters are even worse in Ontario, where a court ruled that every doctor must perform—or refer to a doctor the physician knows is willing to provide—every legal medical procedure paid for by the country’s single-payer health plan, even if it violates the physician’s religious beliefs.

What about the Canadian Charter’s explicit right to “freedom of conscience and religion?” It’s trumped, the court ruled, by patients’ right to access all legal health care—a protection that’s not written in the Charter.

Here in the United States, doctors generally are protected legally against being forced to participate in abortion, and states where assisted suicide is legal generally permit physicians to opt out. But for how long? These conscience protections are under vigorous attack by the media, the medical establishment, bioethicists, and liberal politicians.

For example, when the U.S. Department of Health and Human Services announced it intended to increase legal enforcement of existing statutory protections of medical conscience via the Office of Civil Rights, the screaming was so loud you would have thought Roe v. Wade had been overturned.

In an ironically titled editorial, “The White House Puts the Bible Before the Hippocratic Oath,” the New York Times screeched, without evidence: “The decisions [to refuse the requested intervention] may make it more difficult for teenagers wanting to get tested for sexually transmitted diseases, for gay men looking to prevent HIV, and even for women seeking breast exams or pap smears.”

Predictably, lawsuits were both threatened and filed by Democrat state attorneys general and the City of San Francisco. Just as predictably, the proposed rule was pulled back pending further action by the HHS.

The bioethics movement is clear about its disdain for medical conscience rights, with article after article published in the world’s most prestigious professional journals arguing that doctors should be coerced to provide controversial care with which they disagree morally. Most notably, Ezekiel Emanuel—a major health care adviser to Democrat presumptive presidential nominee Joe Biden—co-authored a column in the New England Journal of Medicine, opining that doctors have no right to refuse to participate in any medical procedure that the medical establishment deems uncontroversial.

He specifically included abortion in that mandate, writing: “Abortion is politically and culturally contested, it is not medically controversial. It is a standard obstetrical practice.”

As for doctors who don’t want to perform procedures with which they conscientiously disagree, Emanuel sniffed: “Health care professionals who are unwilling to accept these limits have two choices: select an area of medicine, such as radiology, that will not put them in situations that conflict with their personal morality or, if there is no such area, leave the profession.”

“Medicare for All” proposals would also eliminate or erode medical conscience. Under one bill, in order to be paid for services rendered, a doctor would have to be a government-approved “participating provider.”

The bill states that participating providers may not “discriminate.” That sounds worthy—until you look closely at the definition of discrimination, which goes well beyond invidious behaviors such as racism, to include “sex, including sex stereotyping, gender identity, sexual orientation, and pregnancy and related medical conditions (including termination of pregnancy).”

What would this mean? As one example, an obstetrician/gynecologist asked for an abortion couldn’t refuse because it would be deemed discrimination “based on medical conditions (including termination of pregnancy),” with the potential penalty of losing status as a participating provider, meaning he or she couldn’t be paid by the government for providing medical services.

Nor could a doctor with the proper expertise refuse to treat children with gender dysphoria—such as by inhibiting normal puberty.

The flowing tide against conscience doesn’t just threaten to sweep individual medical practitioners into the deep. Religious hospitals are also suddenly at risk of being forced to violate their affiliated church’s beliefs.

A court of appeals in California ruled that Dignity Health, a Catholic hospital, could be sued for discrimination after refusing to perform a transgender hysterectomy.

Never mind that the rules requiring the refusal weren’t aimed at transgender patients: The Catholic Church prohibits its affiliated hospitals from removing biologically healthy organs and bans sterilizing procedures, except to treat a medical pathology.

The court ruled that refusing the surgery could be deemed discrimination against which a jury can award damages. (The hospital has sought Supreme Court intervention; as of this writing, the Court hasn’t decided whether to accept the case.)

The question that begs answering in all of this is: Why such focused coercion against Hippocratic physicians? I mean, do we really need another point of conflict in our culture? I think the answer has less to do with worries about any unavailability of doctors, and more with the powerful message communicated when a respected physician says no to controversial or novel procedures.

The last thing the modern mind wants to hear is, “This thing that you advocate is morally wrong.”

Award-winning author Wesley J. Smith is the chairman of the Discovery Institute’s Center on Human Exceptionalism and a consultant to the Patients Rights Council.