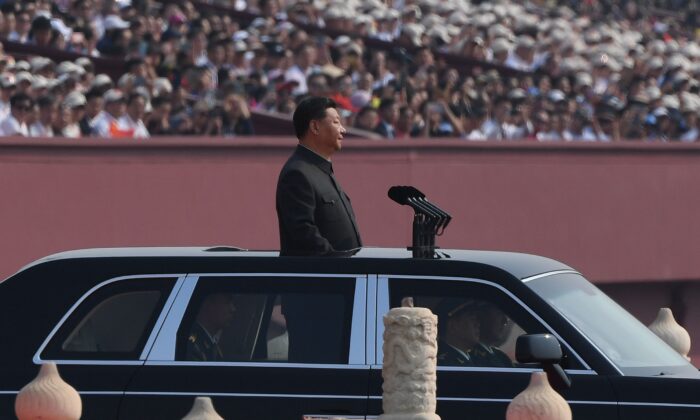 Chinese leader Xi Jinping begins a review of troops from a car during a military parade at Tiananmen Square in Beijing on Oct. 1, 2019. (Greg Baker/AFP via Getty Images)
Viewpoints

Will China’s Moment of Advantage Lead to War With America?

In early 1993, at a conference in Virginia, the Secretary of Defense’s Office of Net Assessment director, the great Andrew Marshall, presented his staff and consultants with a long-term thought experiment: How could the United States fight and win a war for national survival circa 2020 to 2025?

Marshall didn’t name the adversary, but I’d heard him ask a version of the question in his office a couple of months earlier.

So, I’d thought about potential adversaries three decades on…

“You mean against China?” I blurted out. Silence among the conferees. The future admiral sitting to my right shot me a glance.

Andrew Marshall very likely had the finest strategic mind of his era. He wanted everyone in the room to consider the political, technological, economic, military, social, bilateral, regional, and global contexts for such a terrible war.

A subset of politics is leadership.

Burn the words in your brain: war for national survival.

Ukraine is fighting one against another imperialist dictatorship, Russia. Vlad Putin’s Russia, like Xi Jinping’s China, justifies expansionary wars on questionable historical claims of lost territory and injustice that incite ethnic passions. Substituting racist for ethnic is quite fair. What Teuton supermen were to Adolf Hitler’s Gross-Deutschland 1942, ethnic Han are to Xi’s Greater China circa 2022.

China’s bribed media and academia won’t tell that story. But it’s the truth. Ask the Turkic Uyghurs in western China, the victims of a genocide perpetrated by Beijing’s privileged Han.

No. 1: A meeting engagement in the South China Sea. The cause: China’s aggressive territorial claims in the area and outright theft of Filipino territory. As tensions mount, accident, incompetence and/or itchy trigger fingers ignite a deadly sea battle involving U.S. and Chinese forces. Diplomacy prevents escalation—maybe. If the U.S. Navy comes out second best, China gains a diplomatic edge throughout the western Pacific.

No. 2: China Invades Taiwan. The cross-Strait invasion ignites The Big One. It also craters the global economy (including China’s), so economic factors make a case Beijing’s threats are bluster. But don’t dismiss the possibility. Xi is fanatically committed to seizing Taiwan. In the 1962 Sino-India War, China’s surprise attack caught India off guard.

Several factors indicate China has a moment of strategic advantage, a window of opportunity from now until 2026 to deal the U.S. a severe defeat. Beijing’s goal: diplomatic and economic superiority lasting decades. U.S. weakness could lead to Taiwanese capitulation.

Arguably, China has a military edge along the Asian littoral and into the western Pacific. Its modernized military forces are powerful. China’s navy has more ships than the U.S. Navy and can focus its power on the western Pacific. The United States confronts a “hull deficit”—not enough ships to maintain a global naval presence (which has a deterrence effect prior to war) and not enough to fight a widely dispersed battle when conflict erupts.

China has a leadership advantage, at least through January 2025. Beijing knows it will never confront an American president as weak as President Joe Biden. His administration’s Afghanistan debacle put its incompetence, weakness, and arrogant fecklessness on global display.

Can anything be done to counter China’s moment of advantage? The answer is yes, and I’ll address several ideas in my next column.