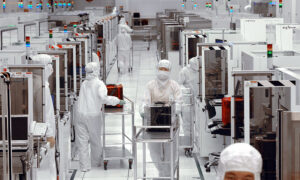 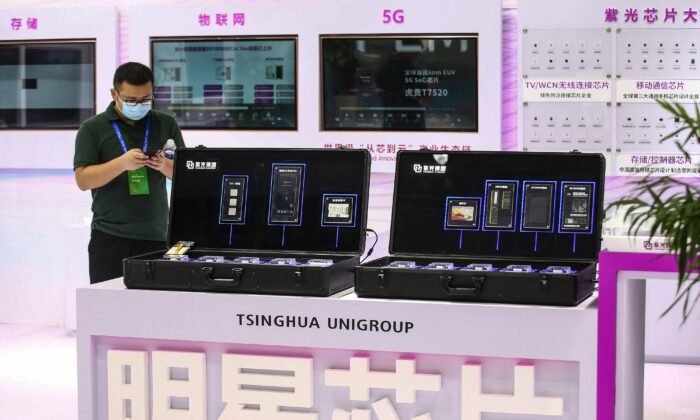 Chips by Tsinghua Unigroup are seen at the 2020 World Semiconductor Conference in Nanjing in China's Jiangsu Province, on Aug. 26, 2020. (STR/AFP via Getty Images)
Thinking About China

China has put all its “chips” into China’s fledgling semiconductor industry.

Many companies are charging into the semiconductor industry. The trend, with the encouragement of the Chinese Communist Party (CCP), is occurring because of pressure from the Trump administration to cut off Chinese technology companies from U.S. chips.

But this latest chip rush may also create vast inefficiencies, divert local resources into wasteful ventures, and usher in a 21st-century version of the “Great Leap Forward”—the disastrous 1950s plan by Mao Zedong to surpass the West in steel production that resulted in mass famine and economic despair.

The need to invest in indigenous semiconductor capabilities is borne out of necessity. China’s chipmaking industry has increasingly been marginalized by U.S. pressure.

Last month, China’s biggest chip fabricator, SMIC, was put on a special entities list by the U.S. Commerce Department, meaning it needs special permission to work with U.S. suppliers. The move bars SMIC from importing critical materials and equipment from U.S. suppliers needed to manufacture chips, and is another blow to Chinese telecommunications giant Huawei, which is SMIC’s largest customer and itself banned by the United States.

In another hit to China’s chip ambitions, global chip giant Intel Corp. on Oct. 21 agreed to sell its China-based NAND flash memory manufacturing business to South Korea’s SK Hynix for $9 billion. Not only were no Chinese candidates considered as a potential buyer—due to Intel’s fear of U.S. rejection of the deal—the sale has strengthened a regional semiconductor competitor in South Korea.

These actions have caused Beijing to increase its rhetoric against U.S. sanctions.

“We need to prepare for a ‘new long march,’” according to an editorial in the state media Global Times. “If China cannot step over the decisive threshold of technological innovation, it will be a humiliation.”

China also is taking action to slow U.S. chip dominance. Chinese companies including Huawei have petitioned Beijing to reject a proposed takeover bid of British semiconductor firm Arm Ltd. by U.S.-based chip company Nvidia Corp., which includes its subsidiary Arm China, a major supplier to Chinese companies including Huawei. The fear is that Nvidia-Arm may be barred from working with Chinese customers post-acquisition.

All these events point to one conclusion—that the CCP is desperate to achieve semiconductor independence as soon as feasible. Its 14th five-year plan, assumed to be released early next year, should introduce massive financial incentives to encourage chip development.

Accordingly, there has been an explosion of new semiconductor firms sprouting across China. More than 13,000 Chinese companies registered themselves as “semiconductor companies” during the first nine months of 2020, according to a recent Financial Times report. A large portion of these companies shifted their focus to semiconductors from other products, aiming to become a national champion and receive government financial support.

Some of them had no prior experience manufacturing semiconductors—including companies previously in the automotive, fishing, and other sectors.

This rush into the semiconductor business by entrants with no prior experience recalls 1950s China, when peasants abandoned their fields to operate backyard furnaces churning out low-quality steel. The waste of resources and resulting famine from this “Great Leap Forward” ultimately caused Mao to lose support among Chinese people.

Already, there have been several high-profile failures in Beijing’s semiconductor push.

Tacoma Semiconductor Technology Co., a project founded in 2015 in Nanjing, declared bankruptcy in July after failing to draw funding. In another wasted investment, a $100 million factory called GlobalFoundries Chengdu Wafer Fab, set up jointly between U.S. firm GlobalFoundries and the city of Chengdu, was abandoned in May after two years. The factory has since been acquired by certain South Korean investors.

Perhaps realizing potential pitfalls, Beijing has vowed to strengthen the future supervision of new entrants into the semiconductor sector.

In the first seven months of 2020, about 60 billion yuan ($9 billion) has been invested in China’s semiconductor industry, Shanghai-based Winsoul Capital estimated in a South China Morning Post report.

Meng Wei, a spokeswoman with the National Development and Reform Commission, the regime’s planning agency, said at a press conference on Oct. 19 that “stalled projects and vacant manufacturing plants have wasted huge amounts of resources,” according to a report by Caixin, a mainland business magazine.

But Meng didn’t identify any specific failed projects, nor did she explain whether the regulator would investigate.

But with billions of dollars already invested into China’s semiconductor industry and little to show for it, the clock is ticking for Xi Jinping.