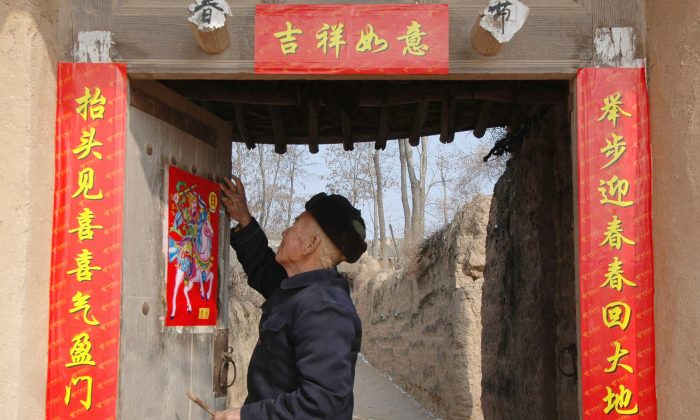 An elderly man pastes spring couplets on his door at a village on in Fu County of Shaanxi Province on Feb. 7, 2005. (China Photos/Getty Image)
Business & Economy

China enthusiasts and supporters of the Beijing Consensus have mainly cited two elements as a proof of China’s invincibility.

The first is rapid GDP growth, mostly higher than 10 percent per year over the last two decades.

The second was an enormous stash $4 trillion in foreign exchange reserves. The emphasis here is on “was” because this stash since melted to $3.3 trillion at the end of 2015, the first annual decline on record and there is no end in sight.

So that leaves us with GDP growth to prove the superiority of the Beijing Consensus’s model of state capitalism.

Jan. 18 2016 will make us a bit smarter in that regard as China releases fourth quarter GDP figures and the annual number for 2015 at the same time.

GDP growth is also in a downtrend, although analysts still expect 6.9 percent growth for the year.

Chinese officials have said they need growth of at least 6.5 percent until 2020 to successfully rebalance the economy away from investment to consumption.

Aside from the fact that official data is mostly made up according to the current Premier Li Keqiang—he said so in 2007 when he was a lower party official—there are other reasons to expect growth to come in lower than the 6.9 percent expected.

Communist party leader Xi Jinping told us in November that growth for 2016 will be no less than 6.5 percent. Since then several think-tanks and statistic bureaus have reiterated this expectation.

China doesn’t like volatility. It might have to report less than the 6.5 percent for 2016 if case the situation on the ground deteriorates further. This would mean a large drop from the 7 percent of 0.5 percentage points.

If on the other hand, if China reports a very bad fourth quarter 2015 and lower annual growth for 2015 around 6.7 percent, it could make the market believe the worst is over and expect a positive surprise in the first quarter of 2016.

For the data on the ground, these deliberations hardly matter.  As Gordon Chang points out, real 2015 growth was closer to 1 percent—a number Beijing will not report for the foreseeable future.