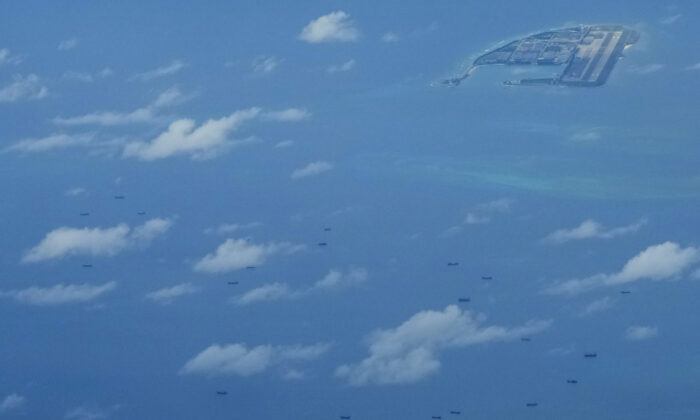 Boats beside Chinese structures and buildings on the man-made Fiery Cross Reef at the Spratlys group of islands in the South China Sea on March 20, 2022. (Aaron Favila/AP Photo)
Viewpoints

Defining terms helps expose Beijing’s strategic gamble, because it’s a gamble: It is unresolved and not a guaranteed outcome, though communist China would love to see frightened kowtows.

Terminology: Among diplomats, “words” translates as political rhetoric, propaganda, narrative warfare, and other coercive verbal and psychological theatrics. “Deeds” for generals and admirals are physical military actions or the threat of military actions made by physically demonstrating military capabilities (posturing forces is a jargon term).

Since February Beijing has upped the temperature of its violent verbal threats (hot words) and increased the number of risky military encounters along its east Asian coast (threatening deeds).

However, China’s bullying statements and intimations during the recent Shangri-La Dialogue conference in Singapore (June 10–12) were particularly troubling.

The annual conference bills itself as “Asia’s premier defense summit.” It’s a diplo-show, but it’s one that usually matters.

Beijing’s most troubling propaganda claim, made in recent months to American diplomats and in the conference’s various diplomatic exchanges: the Taiwan Strait isn’t international water, it is a sovereign Chinese territorial water and international shipping can only pass through the strait with Beijing’s permission.

This represents a dangerous change. Beijing consistently protests U.S. Navy freedom of navigation operations in the Taiwan Strait. However, according to U.S. diplomats, until now Beijing never specifically contested the legality of free international shipping transiting the Taiwan Strait.

China has also indicated it is prepared to enforce its sovereign claim—presumably using its ever-growing navy and ever more powerful air force.

In classic terminology Beijing has issued a casus belli—an act that could provoke war—for nations dependent on free and secure ocean trade.

In the 1990s, China began expanding its bases in the Paracel Islands and constructing artificial islands, especially in the Spratly Islands (near the Philippines). Eventually it topped these islands with runways capable of handling combat aircraft.

In 2012, Beijing attempted to diplomatically and legally project power when it claimed control of 85 percent of the SCS’ nearly 2.2 million square miles. Chinese diplomats produced the Nine-Dash Line. The Line dips south hundreds of miles from China’s coast to near the island of Borneo, encroaching on territory belonging to the Philippines, Vietnam, Malaysia, and Brunei. In 2016, The Hague’s arbitration tribunal supported the Philippines’ accusation that China had intruded on Filipino territory by seizing islets and conducting illegal fishing operations.

So far China has paid no price for lawlessness.

China’s “artificial island” goal circa 2020: deny the U.S. Navy access to the South China Sea and project power toward Singapore and the Strait of Malacca, which connects the Pacific and Indian Oceans.

China sees the Biden administration as weak and feckless. Given Hunter Biden’s corruption, it is not conspiracy theory to think Beijing has blackmail material on the Biden family.

That noted, give Secretary of Defense Lloyd Austin credit for his frank comments in Singapore.

Moreover, China has announced increasing its nuclear arsenal. U.S. intelligence estimates China may have around 1,000 nuclear warheads by 2029.