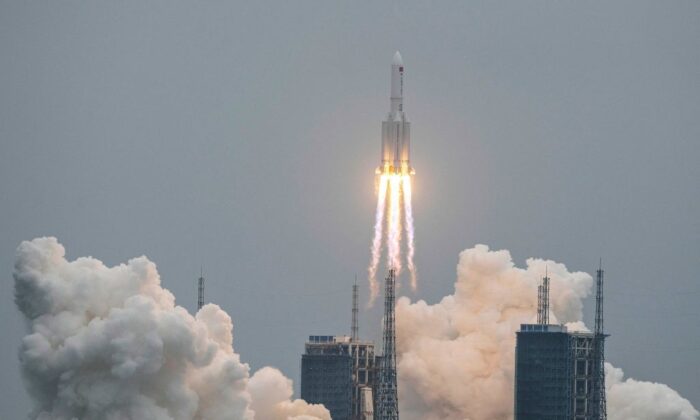 Will China Shoot Down Explorers to the Moon?

“This is not the first time that the NASA administrator has lashed out at China in disregard of facts,” said Zhao Lijian, Chinese foreign ministry spokesperson, at his July 4 regular press briefing. “Some U.S. officials have spoken irresponsibly to misrepresent the normal and legitimate space endeavors of China. China firmly rejects such remarks.”

“We must be very concerned that China is landing on the moon and saying, ‘It’s ours now and you stay out,’” Nelson told German newspaper Bild in an interview published July 2.

Nelson has every right to be concerned. America may have to go to war with China if it even wants to land on the moon. The Chinese have made it clear that, if they get there first, they will shoot down visitors.

“The universe is an ocean, the moon is the Diaoyu Islands, Mars is Huangyan Island,” said Ye Peijian, the head of China’s lunar program, in 2017, referring to features in the East China and South China seas to which Beijing claims sovereignty. “If we don’t go there now even though we’re capable of doing so, then we will be blamed by our descendants. If others go there, then they will take over, and you won’t be able to go even if you want to.”

In short, Ye was projecting, blaming others for what Beijing itself intends to do. He was essentially saying that China would exclude others from these heavenly bodies.

In fact, Ye’s choice of examples is telling. He said the moon is like the Diaoyu Islands. The Diaoyus, in the East China Sea, have been claimed and administered by Japan, which calls them the Senkakus. The claim of the People’s Republic of China to the outcroppings appears weak as a matter of international law: Beijing acknowledged they were Japanese until 1971. This month, Chinese vessels intruded into Japanese territorial waters around the Senkakus, as a means of pressuring Tokyo to surrender them.

The name of China’s Mars rover, Zhurong, is instructive. The official Xinhua News Agency explains that Zhurong is the god of fire. What Beijing didn’t say is that Zhurong is also China’s god of war—and the god of the South China Sea. China claims about 85 percent of that body of water as “blue national soil.”

“Many are beginning to wonder if China will soon do to the moon and the rest of space that which it has done to the South and East China Seas, Taiwan, and northern India: claim them as sovereign,” Brandon Weichert, author of “Winning Space: How America Remains a Superpower,” told Gatestone after Nelson’s comment.

Some scholars dismiss the Chinese rhetoric and Nelson’s warning. Svetla Ben-Itzhak and R. Lincoln Hines, two assistant professors at the Air University of the U.S. Air Force and Space Force, say that China cannot “take over” the moon because it’s constrained by international law. Article II of the 1967 Outer Space Treaty, which China signed and ratified, prohibits “national appropriation by claim of sovereignty, by means of use or occupation, or by any other means.”

If Beijing were to try to claim the moon, Ben-Itzhak and Hines write, “China would risk further tarnishing its international image by breaking international law, and it may invite retaliation.”

God save America from its intellectuals. China doesn’t care about international law in general or the Outer Space Treaty in particular. Last year, for instance, the Chinese military tested an orbital hypersonic glide vehicle, essentially an announcement of an intention to violate the treaty’s prohibition of orbiting nuclear weapons in space.

“China is a space criminal,” Weichert says. “It thinks nothing of willy-nilly violating its international obligations.”

“The Chinese Communist Party requires control of the earth-moon system in order to achieve its ambitions for hegemony on earth,” Richard Fisher of the International Assessment and Strategy Center told John Batchelor of CBS’s “Eye on the World” radio program on July 6.

The United States’ Artemis program, a joint effort with 20 other nations, is straggling far behind Chinese efforts to land on the moon. The Chinese, for instance, are completing their Tiangong space station, a military project, just as the civilian International Space Station is nearing the end of its time in orbit. Moreover, China is fast developing heavy lifters, which are needed to get to the moon and to maintain colonies there.

“I don’t think they understand the mass that the Chinese are prepared to literally throw at the moon to gain the dominant presence,” Fisher told Batchelor, referring to the Americans.

Unfortunately, President Joe Biden has no apparent interest in getting to the moon. Only Elon Musk, with his Starship effort, is developing the means to compete with the Chinese.

“We are in a second moon race,” Fisher told Batchelor. “This time it’s for keeps. Whoever gets to the moon with the mostest gets to keep the moon, and the United States is lagging.”