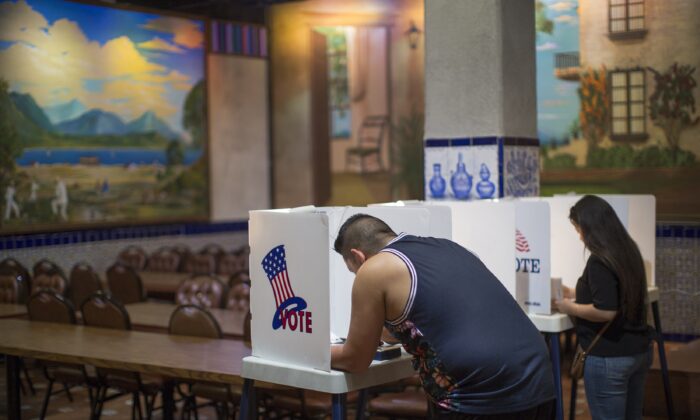 Will California Latinos Follow Texas in Shift to GOP?

Remember this quote by President Reagan? “Latinos are Republicans; they just don’t know it yet.”

Looks more and more like they’re starting to “know it”—and voting that way. This should scare Democrats into taking notice. A constituency supposedly permanently Democratic is starting to break away. That’s because there are no permanent constituencies in American politics. There are only interests, which change.

Republican Mayra Flores just flipped a congressional seat in Texas held by Democrats since after the Civil War. Reported NBC, “Flores fills a South Texas seat previously held by Democratic Rep. Filemon Vela, who resigned in March. She will have to run for re-election in November.” She beat Democrat Dan Sanchez, 51 percent to 43 percent.

According to Ballotpedia, the 34th Congressional District is 84.5 percent Hispanic, with a median household income of $42,014. The 34th is the southeast tip of Texas. One of its constituents is Elon Musk, who tweeted, “I voted for Mayra Flores—first time I ever voted Republican. Massive red wave in 2022.” He’s also an immigrant, in his case from South Africa.

If this shift continues, it will mean Latinos will have followed the political trajectory of other immigrant groups, such as the Irish, Italians, Poles and many others. When they arrive here, the immigrants gather in neighborhoods with co-ethnics. The local Democratic Party machine helps them get jobs, often through labor unions, and maneuver the government system. They begin with low-level jobs, as well as starting new businesses, especially ethnic eateries.

Eventually, the group’s people move upward into the middle class. They start realizing they’re paying really high taxes and their businesses face way too much regulation—just the things they escaped from in their countries of origin. Some have even come from communist countries. The Republican Party’s pro-business, anti-regulation ethos speaks more to their needs.

Before she spoke was a featured speaker panel including California Republican Party Chairwoman Jessica Patterson, a Latina; and Reps. Young Kim and Michelle Steel. The later two spoke of their experiences as South Korean immigrants who started businesses and wanted to ensure a healthy business climate for immigrants and all other Americans.

The Republican effort to recruit Latinos is not new, but only recently seems to have reached a takeoff stage. Reported the Washington Post in 1983, when it still at least tried to report the news objectively, “Opinion polls show that since 1980, when Reagan won about 27 percent of the Hispanic vote, he has increased his popularity in that community to the point that 42 percent of “Hispanics now approve of his handling of the presidency and 38 percent say they want Reagan to seek reelection.

“The gains in Hispanic support are mercurial, however. Reagan’s aides concede that it plummeted in the budget-cutting years of 1981 and 1982 and could fall again in an election year.

“‘Right now we are eating their lunch on the Hispanic vote,’ said a White House official discussing the Democrats’ pursuit of Hispanic voters.”

Prosperity also was the appeal of President Trump. Even the New York Times headlined last October, “Trump’s Latino Support Was More Widespread Than Thought, Report Finds; While Latinos played a major role in Democratic victories last year, Donald Trump’s outreach to them proved successful in states around the country, not just in certain geographic areas.”

This year, of course, Latinos have the same concerns as everyone else, and are blaming the ruling Democrats for their problems: rapid inflation beginning with $7 gasoline, $1.2 million homes few can afford, failing public schools that have replaced academics with indoctrination, potholed roads despite record state surpluses and an onrushing recession that will land many, again, in unemployment lines.

Another aspect is Latinos tend to be among the most culturally conservative groups. They’re not keen on Critical Race Theory, “defunding” the police, turning loose criminals, and no limits at all on abortion. The Democratic Party’s “woke” mania pushes Latinos into the arms of such Republicans as Govs. Ron DeSantis in Florida, Greg Abbott in Texas, and Glenn Youngkin in Virginia.

In a similar vein, in San Francisco, Asians led last week’s recall of leftist District Attorney General Chesa Boudin and, in February, of three radical school board members. People don’t like it when they get mugged and the schools mess with their kids.

Like many things, political movements go in cycles. The Republicans so mismanaged the economy after the 1929 stock market crash, plunging the country into the Great Depression, Democrats almost totally dominated national politics the next 20 years, winning every presidential election until 1952. Then, from 1968 to 1988, Republicans won five of six elections largely because Democrats during the endgame of the Cold War were considered “soft on communism.”

And in recent years in California, Republicans for more than a decade now have produced few new ideas or viable statewide candidates.

But California will be more in play this November. If Latinos and Asians continue their shift toward Republicans, possibly even helping elect one or two statewide Republicans for the first time since 2006, it will be another wakeup call to a Democratic Party.

This still is a democracy. And a Latino shift to Republicans would be democracy in action.