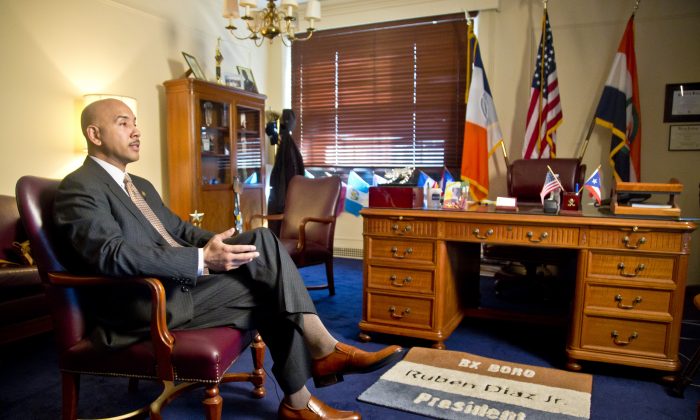 In defense of Mr. Díaz, whom I interviewed last week in his Grand Concourse office, it could be argued that the kiss, widely viewed throughout the Internet, was more than appropriate for the event that ensued that day. Thousands of residents from both Manhattan and the Bronx had come to join Díaz and Brewer and several other elected officials to celebrate the reopening of The High Bridge, an overpass open to pedestrians and bike riders, connecting the Bronx’s High Bridge neighborhoods with Manhattan’s Washington Heights.

The bridge, which was first built in the middle 1800’s making it the oldest standing bridge in NYC, had been totally shut down following the building of the Harlem River Drive in the 1970’s.

Under the day’s circumstances, Díaz explained with a broad smile on his face, the kiss came naturally: “The peck on the cheek of my good friend and fellow Borough President Brewer came extemporaneously, because I was feeling very pleased to see us after forty long years finally once again reconnected in the Bronx’s south and Manhattan’s north sections…. I was also celebrating because that day was not only a day of joining two areas geographically, but also a day of joining two families together once again.”

Díaz, however, told me that he was aware that while the bridge’s reopening enjoyed strong support among both his and Mrs. Brewer’s respective constituents, he was also aware that some residents of Washington Heights had expressed concerns that the bridge could serve as a convenient route for lawbreakers in the Bronx to come to upper Manhattan and commit crimes.

“I take the concerns of every New Yorker living in any of the five boroughs very seriously, particularly in the area of crime and public safety”, said Díaz. “But it needs to be pointed out that crime in the Bronx is currently at the lowest levels since the 1960’s. So I think the concern about crime emanating from the Bronx is based more on the old Bronx than the new Bronx.”

Díaz quickly added, though, that he understands that when access in and out of neighboring communities is expanded, modifications in policing can be required. “I met with the Chief of the Police of the Bronx and the commanding officer of the Bronx side of the High Bridge, and my counterpart Gale Brewer has done the same thing on the Manhattan side…. There is now added police presence on the bridge, which should serve to continue to keep both communities safe.”

Díaz was soon to find his borough facing a crisis that would be far more difficult to resolve. In early July, as a result of what pathologists eventually found to be a bacterium infecting the cooling towers in at least eleven buildings in the South Bronx, a deadly outbreak of Legionnaires’ Disease spread throughout that low-income area.

Before New York City Department of Health officials had announced in late August that the epidemic had ended, twelve people had died from the disease and more than 125 had been seriously infected, but had survived.

To Díaz, the smile now removed from his face, the disease’s deadly toll might have been lessened had the city requested help from the federal government back in early July.

“When I learned that Mayor de Blasio and City Health Commissioner Dr. Bassett had spoken to the federal government about the outbreak but did not request federal assistance, I was puzzled…. Had we received help from the federal government early on, it is not certain, but still possible, that lives could have been saved,” he said.

Yet, Díaz added, he did not intend that last comment (similar to ones he had offered throughout the almost two month span of the epidemic) to be interpreted as a political criticism of fellow Democrat Mayor de Blasio or Commissioner Bassett. Rather, he told me, he was focusing on how to avoid a repetition of such a tragedy in the future.

“At our urging,” he said, “the City Council recently passed a bill that mandates stringent oversight of cooling towers. This bill, which passed unanimously and was quickly signed into law by the mayor, was, I believe, a giant first step in making the Bronx and the entire city a healthier place for all. This is an issue of public health, not politics.”

Still, there appears to be a strong feeling among several Bronx Democratic party sources with whom I spoke in preparation for this interview that Díaz’s criticism of the Mayor’s handling of the Legionnaires’ Disease crisis was heartfelt and was, in fact, filled with political implications, leading him, among other factors, to possibly launch a primary challenge against the Mayor in 2017.

The opinion shared by each of these insiders (as well as some in the media) that a Díaz run for Mayor was inevitable—with the only question asked being when, not if, he would run for City Hall—comes, probably, as less than breaking news for those inside and outside of politics from the Bronx and upper Manhattan who have followed Díaz’s almost twenty year political career.

The 42-year-old married father of two sons, one a junior in college, the other a recent college graduate, Díaz enjoyed his first political victory in 1997 with his election to the NYS Assembly at the age of 23, making him the youngest person elected to that office since Theodore Roosevelt, back in 1881.

Despite, or some have suggested because of his youth, Díaz became quickly known in Albany and throughout the Bronx as a serious legislator, sponsoring or co-sponsoring more than 100 bills that were signed into law, including statutes relating to tenants’ and workers’ rights, environmental protection, and school safety.

Reflecting on his work as a legislator, Díaz stated, ” I was proud of the fact that I had been able to succeed in promoting legislation on a host of key issues that have directly helped improve the quality of life for all New Yorkers throughout the state.”

When in February 2009 the job of Bronx borough president became open after then Bronx Borough President Adolfo Carrion resigned to assume the position of Director of the Obama White House’s Office on Urban Affairs, Díaz was seen by many in the borough as the obvious choice to succeed him.

To those versed in Bronx politics, the rest is well known. In early April Díaz won a special election for borough president, garnering an attention gathering 87 percent of the vote against his Republican opponent. In 2013 Díaz won reelection, with, once again, an overwhelming majority of the vote.

Crime in the Bronx has dropped dramatically, new affordable housing units are being built in record numbers, and thousands of new workers have been added to the job market.

To Díaz, each victory had its own special meaning. “My victory in 2009 was extremely gratifying to me because the voters took something of a gamble in electing someone such as myself, an elected official with only legislative experience, to a high executive position” he stated. “My reelection 4 years later was special to me because it showed that the people believed their gamble had paid off, and affirmed that the borough was moving in the right direction.”

With crime in the Bronx, regarded previously by some as an ungovernable borough, dropping dramatically, new affordable housing units being built in record numbers, and thousands of new workers added to the job market, Díaz, approaching his sixth year as borough president this past spring, was building a record reportedly leading him to be viewed as a likely and viable candidate for NYC Mayor in the future. The question, as noted earlier, was when in the future.

Prior to this calendar year, the future for a Díaz mayoral run was seen by many to be in 2021. According to that hypothetical time line, Díaz, having just completed his presumptive third term as borough president, would run for mayor to replace presumptive two-term incumbent Mayor de Blasio, with both legally prohibited from running again for their respective offices due to term limits. (A since-changed law allows Díaz to be permitted to run for a third term as borough president, should he choose to.)

Currently, though, the term “presumptive two-term Mayor” no longer seems to no apply to de Blasio.

The term ‘presumptive two-term Mayor’ seems to no longer apply to de Blasio.

During the two month Legionnaires’ Disease crisis, de Blasio, on top of the criticism he had received from Díaz, was engaged in a widely reported feud over its handling with Governor Cuomo, a personal friend and political ally of Díaz. And there are other issues driving de Blasio’s poll numbers down to where they are now, with 47 percent of New York voters saying the Mayor does not deserve to be re-elected and only 41 percent saying he does.

With the murder rate up approximately 8 percent and incidents of rape up 6 percent this calendar year one of the major issues challenging the Mayor is the rise in violent crime. That Bronx has seen a slight decline in violent crime while the rate has gone up citywide has added to the speculation of a 2017 Díaz run.

Another key issue is the rise of homelessness, whether fair or unfair to the mayor who receives most of the criticism, the three major New York newspapers frequently run news stories accompanied by pictures depicting the homeless causing havoc on the city’s streets and subway stations.

So in light of all of this, Díaz, I assumed, would not be surprised when I asked him the question that is said to be on the minds of many people, including, perhaps, the mind of Mayor de Blasio: Are you planning to challenge Mayor de Blasio in 2017?

The smile now partially coming back on his face, Díaz offered an answer that seemed to me to be designed to be ambiguous: “I have no plans of running for mayor at this moment, but you never know what the future brings. You never know what the future has in store, but I am focused for now on being borough president serving the people of the Bronx.”

People naturally tend to bring up the question about running for mayor because of our success.
— Rubén Díaz, borough president, Bronx

When I then asked, however, what he believes has fueled the increasing speculation that he might run for mayor in 2017, Díaz was far less equivocal.

“People see all of the things that we are doing here [in the Bronx] in spite of us being written off in the past, in spite of the things you see in the entire city of New York,” he asserted. “We have experienced such a boom in development. We have worked strategically with other elected officials in the area. We have worked with the community and the police department to reduce crime. So people naturally tend to bring up the question about running for mayor because of our success.”

While those words sounded to me like those one would expect from a future candidate, the question of a Díaz run for mayor, I believe, still remains “when.” Stay tuned.