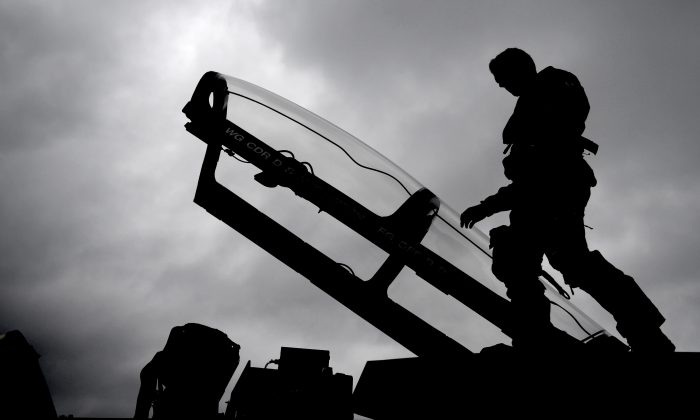 Within hours of a contentious vote Wednesday night [Dec. 2] in the House of Commons authorizing military action in Syria, four British Tornado warplanes took off from an airbase in Cyprus to hammer an Islamic State-controlled oil field in eastern Syria with laser-guided bombs.

“By extending RAF [Royal Air Force] offensive operations into Syria, our aircraft are now able to help dismantle the means by which Daesh plan, direct, and sustain their campaign of terror,” the British Defense Ministry announced Thursday, using an alternative name for the Islamic State, also referred to as ISIS and ISIL.

The airstrikes mark an escalation of Britain’s involvement in the U.S.-led air war against ISIS. Previously, British airstrikes against the brutal Islamist terrorist group had been limited to Iraq.

This move is more about the symbolism of Britain supporting its allies than about achieving any great military effect … in Syria.
— Luke Coffey, Margaret Thatcher fellow, The Heritage Foundation

During Wednesday’s 10-hour debate in the House of Commons, Prime Minister David Cameron urged lawmakers to vote to approve airstrikes against “woman-raping, Muslim-murdering, medieval monsters.” Cameron added: “Do we work with our allies to degrade and destroy this threat and do we go after these terrorists in their heartlands, from where they are plotting to kill British people? Or do we sit back and wait for them to attack us?”

Opposition leader Jeremy Corbyn tried to rally his Labour Party to vote against the airstrikes, but the lawmakers ultimately voted 397 to 223 to approve the measure, with 66 out of 231 Labour members voting in favor. Corbyn criticized what he called Cameron’s “ill-thought-out rush to war.”

The Labour Party leader wrote on Facebook: “British service men and women will now be in harm’s way and the loss of innocent lives is sadly almost inevitable.”

The expansion of Britain’s air war against ISIS into Syria also follows a whirlwind, transcontinental diplomatic marathon by French President François Hollande in the weeks following the Nov. 13 terror attacks in Paris that left 130 dead. Hollande has been pressing for a more forceful international coalition, including Russia, to defeat ISIS.

A statement posted to the Elysée Palace website Thursday said: “The president of the Republic welcomes the first British aerial operations over Syria.”

Britain’s expanded role in Operation Inherent Resolve—the name of the U.S.-led multinational coalition in Iraq and Syria—holds symbolic value and highlights worldwide solidarity after the Paris attacks. But questions linger about the overall utility of British strikes to the long-term goal of defeating ISIS.

“Britain’s decision to expand its airstrikes to Syria is welcome and long overdue,” said Luke Coffey, the Margaret Thatcher fellow at The Heritage Foundation and former special adviser to Liam Fox, Britain’s former secretary of state for defense.

Coffey added: “However, this move is more about the symbolism of Britain supporting its allies than about achieving any great military effect on the ground in Syria. Britain has very limited airpower in the region and is not in a position to beef it up with additional assets.”

The expansion of British airstrikes into Syria likely will have little impact on the day-to-day operational tempo of Royal Air Force (RAF) pilots already flying missions over Iraq.

The major complicating factor, according to current and former RAF and U.S. Air Force pilots, is how “crowded” the battlespace in Syria has become. With Russian warplanes now patrolling Syrian skies alongside those of Syrian dictator Bashar al-Assad, the risk of an unexpected, potentially deadly air-to-air encounter has escalated.

Additionally, without U.S. or coalition ground forces in theater to control warplanes or identify friendly positions as opposed to enemy positions, pilots rely almost entirely on ISR (intelligence, surveillance, and reconnaissance) aircraft, both manned and unmanned, to select targets.

“The fog of war is thick,” said one U.S. Air Force A-10 pilot, speaking on condition of anonymity from an undisclosed location in the Persian Gulf region in September.

Operation Inherent Resolve comprises 62 countries, of which about a dozen actively are carrying out airstrikes in Iraq and Syria. After nearly 18 months, the air war against ISIS is at a stalemate, and it isn’t clear whether the addition of British air power in Syria will make a measurable difference. Many military personnel in the field say the limits of what airpower alone can achieve already have been reached.

Coalition airstrikes (of which U.S. warplanes constitute the overwhelming majority) have been killing about 300 ISIS fighters a week, or about 1,000 a month. That’s roughly on par with the terrorist group’s rate of recruitment, capping its manpower at about 30,000 to 40,000 fighters.

Because of the geography of northern Iraq and Syria—where urban centers resemble man-made islands amid vast, open terrain—ISIS essentially is hunkered down in the cities and towns it controls. The group is unable to mass forces or move freely in the open spaces in between because of the risk of interdiction by coalition airpower.

While preventing civilian casualties is the top moral imperative of U.S. pilots and allied counterparts, the most pressing challenge in Syria and Iraq is coordinating air-to-ground operations without reliable ground forces with which to communicate.

It is much easier, for example, for pilots and analysts staring at a black-and-white infrared sensor feed to distinguish women and children from military-aged males than it is to tell apart Free Syrian Army troops—which the U.S. and allies support—from ISIS fighters.

So while the British expansion into Syria certainly will increase the coalition’s firepower and operational capabilities, military analysts say it will not resolve the No. 1 limiting factor in the war—the absence of U.S. or coalition ground forces.

The U.S. does have specialized joint terminal attack controllers, or JTACs, in theater. These elite troops are trained to guide airstrikes and control warplanes from the ground. But they are conducting their missions while sitting inside operations centers looking at ISR sensor feeds on video screens.

Part of the stated mission of Operation Inherent Resolve, apart from destroying ISIS through airpower, is to train and equip partners on the ground such as the Kurdish Peshmerga, the Free Syrian Army, and the Iraqi Army to take the reins in rooting ISIS out of its strongholds and then holding recaptured terrain.

Presumably, coalition airpower has given friendly ground forces the time and space to train and rearm in preparation for the inevitable ground war.

Yet privately, many U.S. commanders and personnel in theater complain that the Iraqi military isn’t yet up to the task. The consensus is that the Kurdish Peshmerga is a capable fighting force with a strong will to fight but needs better equipment and training. Consequently, military leaders and politicians stress that combat actions against ISIS will require a long-term campaign, likely lasting for years.

“We are going to need to be patient and persistent,” Cameron said, adding: “This is going to take time. It is complex and it is difficult what we are asking our pilots to do. And our thoughts should be with them and their families as they commence this important work.”