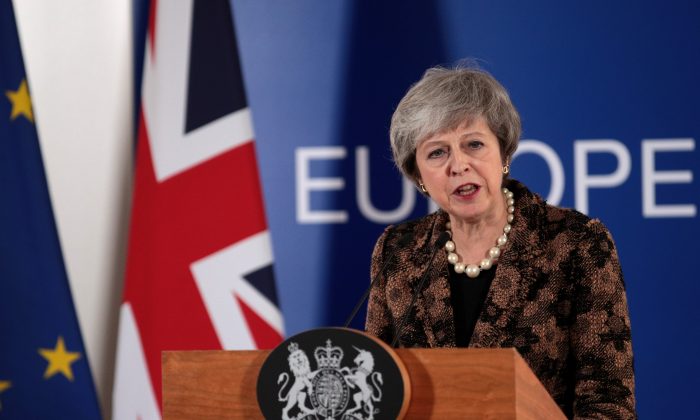 British Prime Minister Theresa May holds a press conference at the European Council during the two-day EU summit on Dec. 14, 2018, in Brussels, Belgium. May returned to the EU summit to secure greater assurances on the temporary nature of the Irish Backstop, in turn hoping to persuade MPs to vote her Brexit Deal through Parliament in the coming weeks. (Dan Kitwood/Getty Images)
Viewpoints

Failure in the UK to implement Brexit is turning into one of the biggest democratic betrayals in modern history, and events during the week of Dec. 10 are making that ever more apparent.

Once Prime Minister Theresa May delayed the vote for her EU withdrawal agreement that had been scheduled for Dec. 11, Brexit voters again saw that there is no democratic way out of the EU, no matter what they do.

Delaying the parliamentary vote on a so-called Brexit deal tells us that it was so bad that neither “leave” nor “remain” voters want it, although it’s painfully obvious that no true Brexit will ever pass through Parliament.

This aside, it’s not hard to see why this deal is so unpopular: There would be no way to leave without the consent of the EU. Plus, the UK would lose all EU voting rights, despite the requirement to continue paying fees. As if that isn’t enough, the requirement to remain tied to the customs union would prevent the UK from making trade deals around the world, and EU laws would still have primacy. This means that the UK would be required to go on implementing EU laws until we abandon a withdrawal agreement that has no end in sight.

The UK would essentially be reduced to a vassal state, in an arrangement clearly designed to punish voters for defying the EU.

Given that May’s withdrawal agreement has been called the worst deal in history, what happened next should come as no surprise.

On Dec. 4, refusal to publish legal advice on the Brexit agreement resulted in May’s government being in contempt of parliament—an unprecedented state of affairs. Once the advice was published, it was revealed that the UK would indeed be bound to the EU, unless permission was granted to leave via a committee vote. Much is also said about the so-called Northern Ireland backstop designed to keep an open border from the north to the south of Ireland. But this is merely a precedent to prevent the UK from having a clean break with the EU.

When it was clear that a vote on such a terrible deal wouldn’t pass, May delayed it—triggering a vote of no confidence within her own party. After months of speculation about reaching the 48-letter threshold, enough letters were finally submitted to the Conservative Party’s 1922 Committee. What happened next, however, further proved that there is no democratic way out of the EU.

It’s well-known that the majority of the Conservative Party membership is not only eurosceptic but thoroughly frustrated with May’s leadership. What’s more, Conservative representatives in parliament and government don’t reflect the will of the membership, which certainly applies to May, too. In fact, wherever you look in Parliament, government, or bureaucracy, all are stacked to the rafters with pro-“Remain” europhiles, who derail in a fashion that’s an insult to the mother of all Parliaments.

It’s no surprise, then, that when Tory members of parliament (MPs) had a vote of confidence in May, she won by 200–117. Bear in mind, however, that the last female prime minister, Margaret Thatcher, won by 204–152, yet still went on to resign. This, however, is academic, because May vowed to fight for her position until the bitter end, clinging to power by relying on many voters being on the payroll of her government.

Another point of note is that Thatcher’s resignation was what truly allowed europhiles to take over the Conservative Party, and we find ourselves in a situation where the entire establishment of UK politics has gone the same way. For the most part, you do not get selected to run in British politics unless you’re pro-EU. How, then, can the 17.4 million people who voted to leave have their wishes respected? The answer is, they can’t.

Nobody Voted for a ‘Brexit Deal’

On March 29, 2019, the UK supposedly legally leaves the EU, but this is much easier said than done. No “deal” will pass through parliament because there is no appetite for it, when most MPs want to remain in the EU.

What democratic course of action is left, then, if you want to leave? Voting for any party other than the Conservatives and Labour might well result in some leave MPs, but certainly nowhere near enough. This will, therefore, solve nothing, and any kind of sea change to British politics will take time in a first-past-the-post voting system.

Nobody voted for a “Brexit deal.” They voted to leave or remain in the EU, and though I voted in this referendum, I suspected it wouldn’t happen, because as a founding father of the EU, Jean Monnet, once said, “Continue, continue, there is no future for the people of Europe other than in union.” This sums up the EU nicely—like the Hotel California, you can check out any time you like, but you can never leave.

As much as I wish I wasn’t right, it now appears that the UK will remain in the EU, once the Article 50 process comes to an end on March 29. May’s claim that “no deal is better than a bad deal” is another example of her broken promises, and the European Court of Justice has decided that leaving the EU can be canceled at any time.

In the event of no Brexit on March 29, a constitutional crisis looms. Despite the democratic vote to leave, many “remain” voters are using every underhanded trick in the book to make sure this doesn’t happen.

And yet, the vote to leave the EU was a formality given that the 1972 European Communities Act is unconstitutional. It clearly states in the 1689 Bill of Rights that “no foreign prince, person, prelate, state, or potentate hath, or ought to have, any jurisdiction, power, superiority, pre-eminence, or authority, ecclesiastical or spiritual, within this realm.”

While a second glorious revolution is unlikely, are “remain” voters really so sure that “leave” voters will take this lying down?