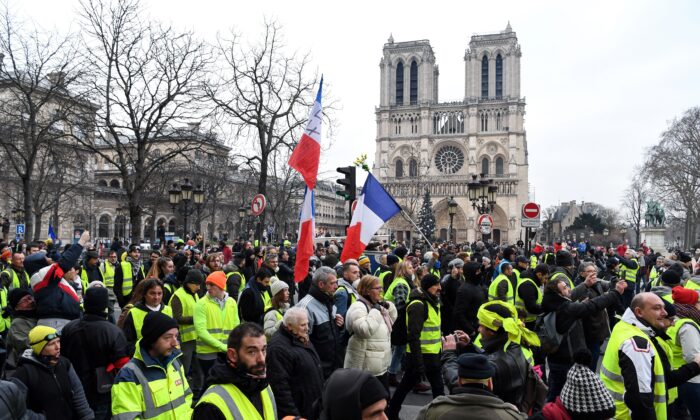 Will Appeasement of Climate Change Hysteria Invite a Popular Rejection?

The day of reckoning over the Western world’s self-destructive indulgence of the excesses of the environmental movement must now be almost at hand.

An important part of the Bidenization of America has been the frivolous discarding of America’s status as an energy self-sufficient nation after 75 years of oil imports.

As if completely deaf to the many and urgent warnings of the cost of shutting down the Keystone XL pipeline from Canada and groveling to the environmental agitators by rolling back offshore exploration and fracking, President Joe Biden and other administration spokespeople have, apparently unselfconsciously, lowered themselves to beseeching the Russians and Iranians, countries with whom the United States notoriously possesses no reservoir of goodwill, to join with the rest of OPEC in increasing oil production.

This initiative is of a piece with Secretary of State Antony Blinken’s scolding of the Taliban regime the White House and the Pentagon helped usher into office in Afghanistan, for insufficient “diversity” in the selection of the new regime’s cabinet ministers, with John Kerry’s degrading petition of China for greater respect for the conjured dangers of climate change, and with the chairman of the Joint Chiefs, Gen. Mark Milley, volunteering from the Ruritanian vastness of his hyper-beribboned tunic that the recent testing of Chinese and Russian hypersonic nuclear-capable missiles was “a Sputnik moment.”

Where were Milley and his colleagues—prior to their masterly performance in Afghanistan—and former Defense Secretary James Mattis when President Donald Trump provided the Defense Department the funds to do everything it needed to assure U.S. military superiority?

All of these reflections indicate the other-worldly preoccupations of this administration. This is the mentality that admits thousands of likely COVID carriers illegally across the southern border into the United States every day, while failing to discourage Democratic civic administrations in New York and elsewhere from laying off policemen and firefighters, most of whom have a COVID immunity from having previously contracted that illness and recovered from it, for declining to be double vaccinated.

Apart from being unjust and probably illegal and absurdly inconsistent, that’s a policy that inevitably accelerates the skyrocketing rates of urban violent crime in most American cities.

But it’s the saga of self-inflicted economic wounds in appeasement of climate change hysteria that most vividly illustrates the lethal toxicity of Bidenization. The spectacle of the president of the United States going cap-in-hand to the Kremlin and the ayatollahs is more demeaning than the indignities of the helicopters leaving the embassy compound in Saigon in 1975 and the seizure of the embassy hostages in Tehran in 1979.

And as the rites and antics of Bidenization accumulate, the major oil companies of the world have effectively ceased exploration, graciously introducing the eco-fairyland in Washington to the implications of supply and demand. That is, the supply of oil will decline as the demand increases and the price to ungrateful Americans increases.

If Biden imagines that the Kremlin and the ayatollahs or even our esteemed allies in Saudi Arabia (who cut the price of oil in the late Obama years in order to put a rod on the backs of the ayatollahs and, in doing so, saved Latvia, Lithuania, and Estonia from Putin’s efforts to revive the Soviet Union), are going to palliate the violence eco-Bidenization has done to scores of millions of U.S. households by raising gasoline and home fuel prices for the American public, he’s more cognitively beset than is generally reckoned. (Ironically, the United States in the past 20 years, including the Trump term, had a brilliant record in reducing carbon emissions.)

Writing on Nov. 1, I expect the elections in Virginia on Nov. 2 will provide a sobering lesson in electoral arithmetic. This will be followed by the draconian comeuppance that the whole country is reserving for the Bidenists next year and especially in 2024. But we will have to endure these upcoming years with Job-like patience as the executive branch leads America into ever-greater unnecessary energy expenses and evermore absurd “sustainable” energy boondoggles.

But there’s a ray of hope that arises in mother England and in the contemporary plebiscitary spirit. It isn’t widely realized what an important geopolitical development Britain’s vote to depart the European Union five years ago was. And it’s possible that a sequel is in the making.

The European Union was the successor to Cold War associations of European states that essentially strengthened the West in the Cold War by deepening the bonds that held Western Europe together and enabled it to resist the threats and blandishments of the Soviet bloc.

But after the Cold War ended satisfactorily, it became the pursuit of “an ever-closer Europe” that would steadily aggregate into one confederal superstate that would enable Europe to reenter the world as a great power and, accordingly, a rival to the United States, rather than as the meeting place of America’s principal allies.

For Great Britain, one of the world’s five or six most important countries and one of its very most distinguished nationalities, to secede from such a combination of states and resume the status that enabled it to be the principal ally of the United States in both world wars and in the Cold War, though it wasn’t presented in this way to the British voters, was an act that reinforced America’s geopolitical position.

British Prime Minister Boris Johnson, who led the campaign to depart Europe while maintaining cordial trade and political relations with it, all in the framework of the Western Alliance, is, inexplicably, a climate change enthusiast who in his more animated moments stops only slightly short of Biden’s parroted bunk about the “existential threat” of climate change.

But the British public, like the French “yellow jackets” who rioted and demonstrated for an entire angry year about gasoline and home heating fuel price increases due to additional taxation to combat climate change, have real reservations about Boris’s current hobby-horse.

As this is an issue on which it will be difficult to impose party discipline, as public resentment over the cost of reducing carbon emissions with higher taxes and prices becomes clearer, some are already foreseeing a British referendum on this issue, a “Climate Chexit.”

Historically, Britain is rivaled only by the United States and France as the most politically influential and widely emulated country in the world, and a British referendum on the cost of combating climate change, whatever its result, would generate substantial pressure for a similar consultation of public opinion in the United States.

Congressional and parliamentary democracies tend not to like referendums. The history of both systems favors the election of legislators to work out the precise wording of legislation and even in France, the history of referendums prior to the current Fifth Republic was of rubber-stamps of questionable accuracy of the most self-serving initiatives of the emperors Napoleon I and Napoleon III.

The United States has no history of such nationwide plebiscites but any reasonably worded question about the desirability of proceeding with the Biden administration’s $550 billion carbon suppression program triumphantly unveiled in Glasgow, Scotland, will almost certainly produce an unambiguous vote for rejection.

Since the faddists dominate the political class and the national political media, it would be a magnificent act of self-liberation for the United States to consult itself, and puncture the giant hot-air balloon of faddish and generally mindless environmentalism.