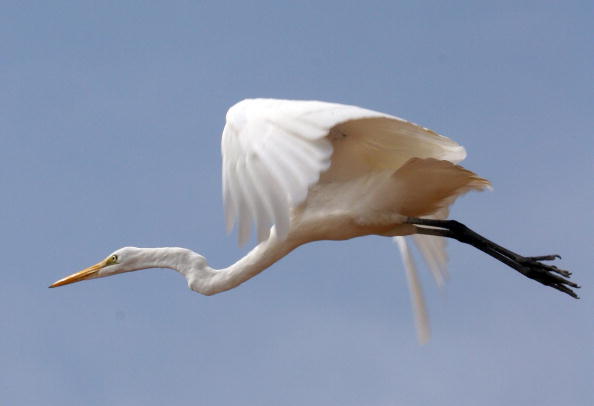 Most of the news coverage about the drought in California has been about how brown our lawns will become, how farmers may have to fallow some of their crops in order to save the almond and pistachio trees in which they have invested so heavily, and how our native and declining fish populations may be put at risk of extinction, which would cause a crash in the salmon industry. However, what the media has not covered extensively is what this drought will mean to those birds and wildlife that rely on our Central Valley refuges and wetlands. This past winter, as our usual California rains failed to arrive, I began to worry about just that.

As a resident of California’s Central Valley and a director at Defenders of Wildlife, I have had the chance to visit many of our state wildlife areas and federal wildlife refuges in the Central Valley. This first-hand experience has made me acutely aware of the importance and fragility of these lands. Wildlife refuges support millions of waterfowl, shorebirds, songbirds, and raptors, as these birds travel the same paths traveled by billions of their ancestors before them.

Each fall and winter, millions of birds fly over the Valley, stopping on their way south to rest and refuel at the few places left where they can. Walking in Stone Lakes National Wildlife Refuge, you can hear the unique call of the threatened greater sandhill crane before you see their enormous bodies gliding high overhead. At the Sacramento National Wildlife Refuge in late fall and winter, you can witness massive “fly-offs” as tens of thousands of snow geese lift up into the air at once as evening falls. At the San Luis National Wildlife Refuge, tens of thousands of shorebirds and songbirds migrate from fall through spring.

As stunning as this yearly migration is, it is a shadow of its former self. Before California’s Central Valley was settled, there were more than four million acres of wetlands in the Valley. Today, only about 200,000 acres of wetland habitat exist in the Central Valley, approximately five percent of their historic extent. The 19 federal wildlife refuges and state wildlife areas in the Valley are a key part of this remaining five percent of wetlands. These refuges and wildlife areas are absolutely critical to birds, especially during drought when they may have the only water needed by wetland-dependent birds and wildlife.

In late May, the wildlife refuges located south of the Bay Delta dodged a proverbial bullet. Federal District Court Judge Lawrence J. O’Neill ruled against the Friant Water Authority’s demand that the Federal Government immediately stop sending water to the wildlife refuges. The Friant Water Authority is a group of San Joaquin Valley water agencies that provides water from the federal Central Valley Project to farmers on the east side of the Central Valley. Friant wanted the federal court to shut down the Bureau of Reclamation’s plans to provide a meager supply of water to the federal and state wildlife refuges and instead, in essence, give that water to them.

The judge’s decision was a victory for the Central Valley refuges, but not necessarily a lasting one. Friant’s demand was in the form of a temporary restraining order – essentially a request to temporarily halt an action (in this case, sending water to refuges) until the court has the time to hear the whole case on its merits. And so, the judge’s ruling on the issue – not to grant the restraining order – is also temporary. But, an upside is that one of the main reasons the judge ruled against Friant was because he found that it was unlikely Friant would win the case even after a full hearing. In his final paragraph, Judge O’Neill wrote:

“Contrary to the popular synopsis that this case is about overzealous government regulators prioritizing the needs of fish and wildlife over farmers and the economy, this decision is a direct result of the law as Congress has chosen to write it. It is the duty of the Court to uphold the law, regardless of the presence or absence of popularity.”

What the judge wrote was important because he basically said that when Congress passed the Central Valley Project Improvement Act in 1992, Congress specifically required that the federal Central Valley Project had to provide a minimum amount of water to the wildlife refuges in order to ensure that these last vestiges of a once-sprawling systems of wetlands, rivers, streams and forested areas would be available for fish and wildlife. Congress realized at that time that the wildlife refuges were critical to the continued existence of millions of migratory birds moving up and down the Pacific flyway and that these refuges had to have a minimum amount of water each year if there was any chance to keep these birds alive.

Friant’s legal attack is far from over, and despite Judge O’Neill’s decision, it is very likely this challenge will continue to wind its way through the courts. Or, it could find its way to Congress where political leaders are debating short-term drought solutions and not necessarily keeping the environment in mind. In any event, as our summer begins and the heat builds over the Central Valley, drying out rivers, streams and wetlands, California’s wildlife refuges and wildlife remain at risk.

The drought we are experiencing now will have a severe impact on migratory birds and other wetland-dependent wildlife. Already, wildlife refuges are dried out with cracks forming into the dirt where water once stood. Refuge fields that would have been planted with corn or other seed crops for migratory birds stand idle. When the great fall migration begins, millions of birds will crowd onto these refuge areas as there will be few, if any, wet patches of ground outside of the refuges available on which the birds can stop over and rest. This crowding may lead to the spread of disease such as avian cholera and botulism. Also, food will be scarce, resulting in fewer birds getting to their breeding grounds and fewer birds breeding. There is no doubt that the impacts of this drought will likely be felt for many years after 2014.

Thus, with the drought already stressing millions of migratory birds, we have to ensure that we uphold what Congress already decided when it enacted the Central Valley Project Improvement Act in 1992: The federal government and the state of California have an obligation to provide for the minimum water needs for these refuges to ensure that future generations will be able to see lesser sandhill cranes gliding above, huge snow geese flocks lift up at once from their resting spots, and Swainson hawks soaring high above their heads.

This article was originally written and published by Kim Delfino, the California Project Director for Defenders of Wildlife. For the original article from defendersblog.org, and more information, please click HERE.