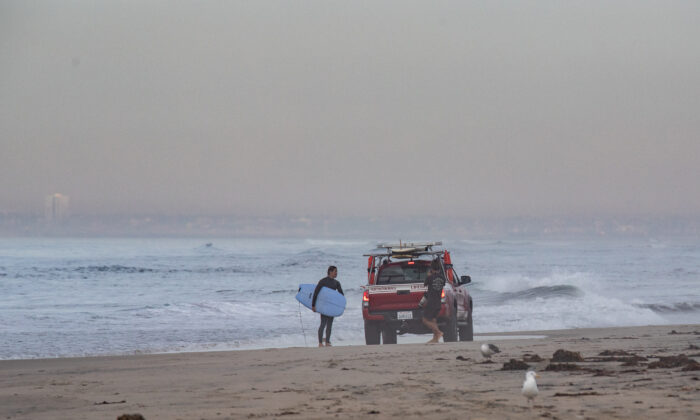 HUNTINGTON BEACH, Calif.—The director of a state program charged with collecting and caring for wildlife injured by oil spills said Oct. 4 only four oiled birds have been gathered so far from this weekend’s massive spill off the coast of Orange County, but he warned the numbers could still rise dramatically.

One of the birds collected since the spill occurred Saturday, a brown pelican, had “chronic injuries” and had to be euthanized, according to Michael Ziccardi, director of the Oiled Wildlife Care Network based at the University of California–Davis.

“Right now with four live birds collected to date, it’s much better than we had feared,” Ziccardi said. “But typically spills of this nature, we’re here for several weeks to months continuing to respond to animals and respond to calls for animals that may be out there. So it’s really too early to
tell, but we are cautiously optimistic.”

Ziccardi said the organization has teams throughout the affected area, as well as reconnaissance teams to the north and south looking for birds that may be oiled but are still able to fly, making them more difficult to catch.

“We have been asked many, many times what can the public do what can people do if they want to help,” he said. “First and foremost we need people to not try to catch oiled animals. It’s not safe for the animals, it’s not safe for them, because oil can be a toxic substance. We ask that they report those sightings immediately to our hotline.”

He said the organization is not yet seeking volunteers from the public, but people interested in being trained as volunteers should they be needed can do so at the calspillwatch.dfg.ca.gov website.

“Oil spills are traumatic—traumatic to the community, traumatic to us individually,” he said. “They are accidents. Nobody wants spills to occur—the operators, the public, the wildlife professionals. I’m a veterinarian, so my mandate is do no harm. So obviously the best spill is one that no animals are affected at all. But what we try to focus in on if these accidents do occur, doing as much as we can to try to mitigate any damage that might be out there, both for the public as well as for the state and the agencies involved.”

Joleah Lamb, a University of California–Irvine professor of ecology and evolutionary biology, said the damage from the spill could last for year and is difficult to gauge.

Lamb said the impact of the Exxon Valdez oil spill in Alaska in 1989 and the Deepwater Horizon oil spill in 2010 are still being felt.

“I think ‘cleaning up’ is a phrase that is overstated in both cases,” Lamb said. “Even after Exxon Valdez 32 years later we’re still seeing tremendous effects on those beaches. Even if we think we’re cleaning it up there’s a lot of subsurface chemicals, particulates on the ocean floor.”

Scientists don’t really know what impact the pollution has on the evolution of microorganisms, Lamb said.

Southern California is blessed with the resources to jump on an oil spill of this magnitude, Lamb said.

“But most places do not have the facilities and the money to react so rapidly to them,” Lamb said.

Rep. Mike Levin (D-Dana Point) said he had previously introduced legislation in the Build Back Better bill that would ban off-shore drilling and phase out existing rigs. Lamb said most scientists support that.

“As a marine biologist we would all agree with that,” Lamb said.

“They should be decommissioned at the very least.”

There is some debate among experts about whether to leave the rigs in the ocean because they provide habitat to some sea life, Lamb said.