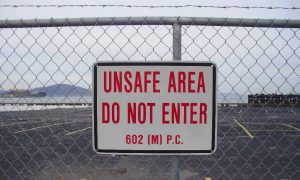 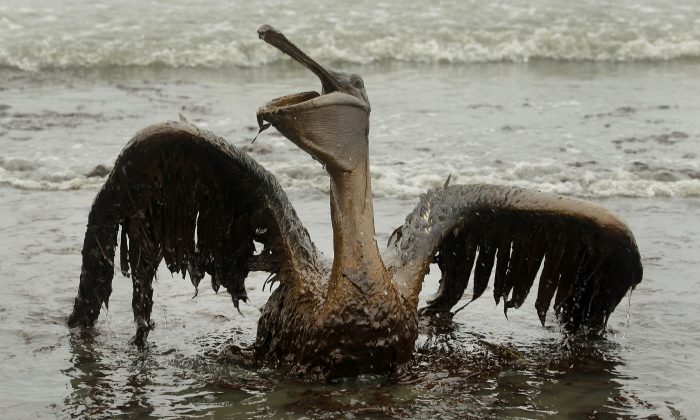 A brown pelican covered in oil sits on the beach at East Grand Terre Island along the Louisiana coast on Thursday, June 3, 2010. Oil from the Deepwater Horizon has affected wildlife throughout the Gulf of Mexico. (AP Photo/Charlie Riedel)
Environment

The WWF has reported the Earth lost half its wildlife in the last 40 years. This is an alarming rate that exceeds the great extinction of the dinosaurs, experts said.

The “Living Planet Report” is compiled by the WWF every two years to assess the biodiversity of the planet. By compiling a measurement of more than 10,000 representative populations of mammals, birds, reptiles, amphibians, and fish, into a record called the Living Planet Index, researchers have determined that the total has dropped by 52 percent since 1970.

The report, broken down, shows a percentage loss of 39 percent in terrestrial animals, 76 percent loss in freshwater animals, and 39 percent in marine animals between 1970 and 2010.

But how important are these findings?

A group of experts on wildlife conservation gave a chilling account of what this really means.

Ken Norris, director of science, Zoological Society of London. His team was involved with the research in the Living Planet Report.

“The declines documented in our report reflect human impacts, primarily activities that cause the loss or degradation of natural habitats. There is now overwhelming evidence showing that nature provides essential services for humanity—clean air, water, food, climate regulations, etc. There is also overwhelming evidence showing that these services have been severely eroded in recent years because of human impacts.

“This means that by the time my children are my age we will have reduced these populations by three quarters. This is unprecedented in the Earth’s history. There have been mass die offs in the past but nothing at this rate and magnitude.”

A Huge Signal That Something’s Wrong

“This is a clear signal that populations worldwide are in big trouble.

“All these species are parts of a system that we’re also a part of. To have them dropped by half is a significant loss, a significant degradation of a system, multiple systems that make up a larger global ecology that we all depend on for our lives. … Literally, our lives.

“Every species plays a role to some degree, and to start tinkling with that. If you take a radio apart then you put it back together again and you’re missing two screws, that’s probably not a good thing. For a system like this, that we totally don’t understand, … we ought not to lose any of the parts. … We’re already seeing the effects with wild bees. It was in the news for a while, these farms in China, pear farms. They have to hand-pollinate all their orchards now. They’ve got guys up there with little brushes taking the pollen from one place and putting it in the others.

“If you have a signal such as ‘we’ve lost 52 percent of our animals on earth,’ that’s a huge signal that something’s wrong, and it’s a huge signal that it will effect us in the end. … Ultimately the earth, the system … will rebalance itself. But there’s no specific reason why we wouldn’t be a part of that … The planet is 4 billion years old, we’ve been here for the blink of an eye. We could disappear in the blink of an eye.”

We Don’t Even Know What We  Are Losing

“It is a great tragedy that we don’t even know the true value of what we are robbing from future generations, and that they can’t tell us to stop. … If you lose two of the three tiger species in northern Asia forever and there’s one species left, and there’s only 400 of those, you may argue that this is a loss that future generations may live to regret.

“Wherever there were once wolves and mountain lions in North America, you can see entire forest ecosystems change because of the browsing habits of deer, elk and moose. … When you take away the apex predator, you basically see the removal of a certain tree species.

“Pharmaceutical companies rely heavily on natural compounds to find out what new medicines to synthesize. There have been well documented cases of species and shrubs and trees that were thought of as just trash, that later turned out were valuable cancer-fighting drugs. We’re throwing things away without knowing their value.

“We don’t even know what we  are losing.”

“Just another metric to show that we are likely entering a sixth mass extinction. … Communities and ecosystems will change in ways that we don’t yet understand, almost certainly leading to reductions in human food supplies and ecosystem services. … We are abrogating our moral responsibility to conserve biodiversity for its own sake. … There are very few workable solutions to stem these trends.

“Deeply depressing with no silver lining.”

“A half-empty mall doesn’t work because there is too little commerce going on, and walking through a deserted mall is eerie. If you have ever experienced a full landscape, then walking through a half-empty one is the same: there is too little biology going on, and, like the deserted mall, it can be eerie. The crux of the matter though, is that we all know what a vibrant mall feels like, but many of us may have never experienced a vibrant landscape.

Profound Impacts on How Ecosystems Work

“[It is] valuable for scientists and managers of the environment to get a big picture view of what is happening to the abundance of all wildlife.

“Wildlife shapes the health of both ecosystems and human communities. Knocking back wildlife abundance so severely has had profound impacts on how ecosystems work, how diseases circulate through society, how much food we put on our plates, and how much of live diversity we encounter during our lives. We don’t really get this big picture for what is happening to wildlife without metrics like this.”

“These declines in wildlife are massive but often unseen changes in the world around us. This report helps us see the magnitude of the problem. These changes are important because we rely on wild animals to support our way of life, and they support us for free. It’s like having a garbage collector who doesn’t need taxes, or a baker down the street that doesn’t need payment. Replacing nature with technological fixes is usually expensive.

“Coral reefs provide food for millions of people around the world, while also preventing erosion and flooding for property onshore. Since the 1980s, we have seen a 40 percent decline in coral cover globally. In addition, at least 3 billion people around the world rely on fish as an important source of protein. Many fish populations have declined dramatically: red snapper by 99 percent, bluefin tuna by 85 percent.

“To address these problems going forward, one of the best things each of us can do is reduce our use of fossil fuels, whether taking public transportation, carpooling, or choosing renewable electricity for our homes. Rapid climate change is a massive threat for wild animals.”

We Are at a Fork in the Road

“Species losses are running at rates comparable to or in excess of the great extinctions of the geologic past. … My 2007 paper on amphibians showed amphibians were going extinct hundreds to tens of thousands of times their background rate.

“Whether we contend that current extinction is 1,000 times background extinction [the normal extinction rate], or 200 times that of the Cretaceous Mass Extinction is an argument for academics. We have seen a number of studies come out demonstrating that the enormous losses are in line with the mass extinctions. … In the U.S. well over 90 percent of wetlands and native grassland are gone. Is it any surprise that the vast majority of grassland species are also in trouble?

“Think of it like a net hammock. No one string of that hammock is holding you off the ground … but eventually if you keep cutting strings, you are going to fall to the ground. … We need to recognize that we are at a fork in the road.”

Time Is Running Out

“The imminent extinction of iconic wildlife species like the Sumatran orangutan, tiger, and rhino is truly a crime against future generations. Our grandchildren and theirs are unlikely to judge us kindly if we allow this historic tragedy to unfold on our watch.

“There is still time to make the hard choices and take decisive action to reform destructive industries like palm oil and pulp plantations before it’s too late—but time is running out fast and we may be the final generation left with the option to make this choice. It will take all parties, from governments to corporations to civil society to work together to preserve these extraordinary animals by protecting enough viable habit for them to survive. The time to act is now.”

Comments have been edited for brevity and clarity.

*Image of “wildlife” via Shutterstock