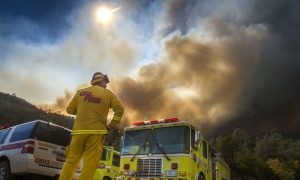 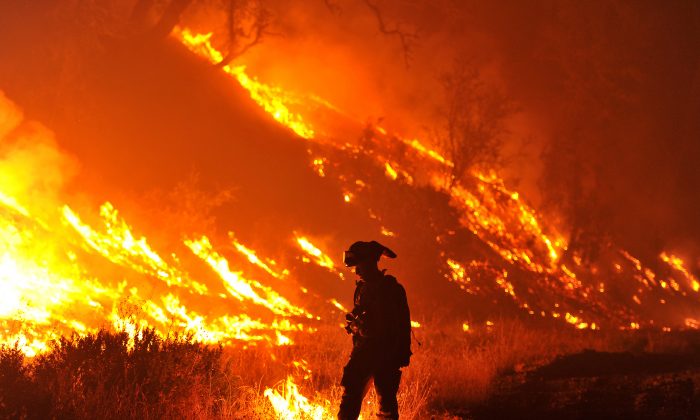 Wildfires rampaged across the drought-choked West on Thursday as authorities scrambled for resources to beat back the flames.

The blazes took a deadly turn in Washington state, where three firefighters were killed and four more injured.

Authorities say three firefighters died after their vehicle crashed and was apparently caught by a “hellstorm” of flames as they battled a blaze in Washington state. Four other firefighters were injured near Twisp.

The news came after officials urged people in the popular outdoor-recreation centers of Twisp and Wintrop, in the scenic Methow River valley about 115 miles northeast of Seattle, to evacuate.

Firefighters on several fronts were fighting against wildfires advancing on towns in the north-central part of the state.

A larger group of fires burning to the east covered about 50 square miles and prompted the evacuation of Conconully, home to about 200 people — with further urgent evacuation orders issued Wednesday night for an area south of Conconully to the Omak town line.

Authorities warned that more high winds Thursday could make conditions very challenging. The National Weather Service issued a red flag warning for the eastern portion of the state until 5 p.m. Friday. Officials said temperatures will climb above 90 degrees and relative humidity will drop as low as 14 percent.

There are 16 wildfires burning in California with more than 10,000 firefighters on the front lines as crews contend with abnormally high temperatures for the season and drought-stressed fuels that haven’t burned in 30 years.

Among the blazes is a fast-moving grass fire that has scorched nearly 4 square miles of dry brush near Livermore.

At least one unoccupied home was destroyed in the rural area Wednesday. The Carnegie State Vehicular Recreation Area, a popular motorbike terrain park, was evacuated after the flames were reported Wednesday afternoon. The fire is about 5 percent contained.

A blaze burning for nearly three weeks on the western slope of the Sierra Nevada surged in size in a recreation area outside Kings Canyon National Park where more than 2,500 campers, hikers, employees and residents have been evacuated this week.

Crews gained ground overnight in their battle against a wildfire in eastern Oregon that destroyed 36 homes and was threatening 500 more.

Since starting from a lightning strike last week, the fire has burned through 84 square miles, mostly in the Malheur National Forest. It was 10 percent contained Thursday morning. Various evacuation orders remained in effect.

There are 649 firefighters assigned to the blaze, one of 11 large fires burning across Oregon.

U.S. Forest Service Chief Tom Tidwell and Gov. Kate Brown were to be visit the fire command post on Wednesday at the Grant County Fairgrounds, where food, clothing and household goods for victims were being handed out.

Firefighters battling blazes in Idaho braced for tough conditions Thursday with temperatures expected in the 90s along with winds of 25 mph and low humidity.

Nearly 700 firefighters supported by 39 fire engines and aircraft continue to work on a group of fires near Kamiah in northern Idaho that has destroyed 42 homes. But containment is only 30 percent on the fires that have scorched 61 square miles.

In west-central Idaho, federal officials closed a portion of the Payette National Forest due to a 10-square mile fire burning about 20 miles northwest of McCall.

Fire officials say fire lines were bolstered overnight but list the fire as having no containment due to heavy fuel loads in the area and expected strong winds.

The houses are in a canyon on a highway north of the small town of Noxon. One fire is burning about a quarter-mile away from the nearest home, fire spokesman John Head said.

The residents of at least 20 more residences south of the evacuation area have been given notice that they may have to leave, too.