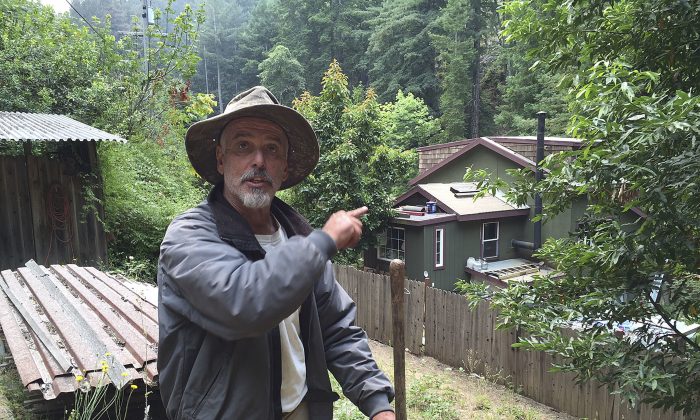 Resident Keith Bispo points to his house in the Palo Colorado community while interviewed in Big Sur, Calif., on July 29, 2016. Bispo stayed at his house the past week to protect he and his neighbors' properties after the area was evacuated. Lodge managers and cafe owners along California's dramatic Big Sur coast were looking Friday at a summer of jittery guests and cancelled bookings after fire officials warned that crews will likely be battling a wildfire raging in steep, forested ridges just to the north for another month. (AP Photo/Terry Chea)
US

BIG SUR, Calif.—Lodge managers and cafe owners along California’s dramatic Big Sur coast were looking at a summer of jittery guests and cancelled bookings after fire officials warned that crews will likely be battling a wildfire raging in steep, forested ridges just to the north for another month.

Big Sur establishments were already reporting as much as a 50 percent drop in business, said Stan Russell, executive director of the chamber of commerce. That’s even though the only signs of the blaze were fire trucks and an occasional whiff of smoke along the famously winding and scenic Highway 1.

Normally, this time of year “is when everybody really runs at 100 percent,” Russell said Friday about tourism in the area. “This is when we make our money.”

The week-old blaze a few miles north of Big Sur had been blamed for one death, that of a bulldozer operator working the fire line. The fire has destroyed 57 homes and burned 42 square miles (134 square kilometers).

Flames were concentrated in forested ridges above the summer fog line along the coast. Many patches of fire were in areas too steep to be reached, the California Department of Forestry and Fire Protection said.

More than 5,000 firefighters were battling the wildfire that officials expect to linger until the end of August.

Highway 1 remained open, but signs along the narrow route warned travelers that all state parks in the area were closed because of the fire.

At the luxury Post Ranch Inn, where clifftop rooms that open to sweeping views of the Pacific Ocean go for more than $2,000 a night, general manager Kevin Geanides was offering refunds to guests canceling stays because of the wildfire. Business was off about one-fourth, he estimated.

Smoke was thick along the Big Sur coast for the first days of the blaze. With a shift in the wind, “the past few days, if you were standing on our ridge, you wouldn’t even know there was a fire,” Geanides said. Other residents and travelers agreed.

Hotel workers reviewed emergency evacuation plans as a precaution, despite the blue skies along the coast.

Fire officials earlier in the week ordered at least 350 residents to leave homes that were much closer to the flames.

Keith Bispo of the hard-hit Palo Colorado community of Big Sur defied the evacuation order, even though his wife, 1-year-old child, five dogs and two cats pulled out.

On Friday, Bispo’s house still stood. Many of his neighbors’ homes were gone.

On the outskirts of Los Angeles, meanwhile, crews had stopped the spread of a 61-square-mile (157-square kilometer) blaze that killed one man and destroyed 18 homes.

Fire officials said that fire was 85 percent contained eight days after it broke out in suburban Santa Clarita and spread into the mountainous Angeles National Forest.

Authorities have not determined the cause of either California fire.

A new fire in southwest Wyoming has destroyed eight rural homes and forced the evacuation of about 140 others.

Elsewhere in Wyoming, favorable weather allowed firefighters to take the offensive against a wildfire threatening hundreds of seasonal homes. The fire in Shoshone National Forest has burned about 19 square miles (49 sq. kilometers).

In Idaho, a wildfire crossed a state highway and threatened a backcountry yurt outpost popular among winter recreationists.