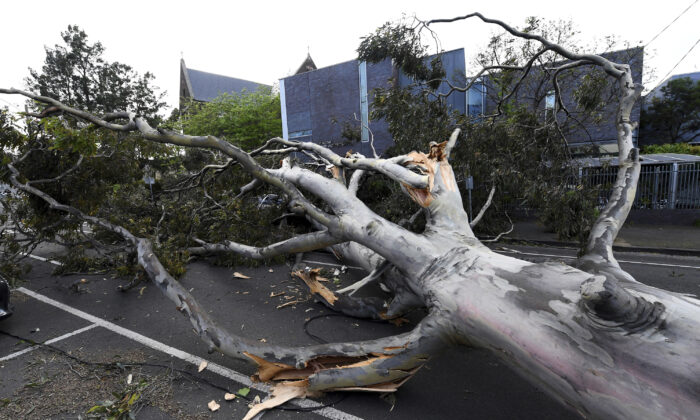 A fallen tree lays in a street in Melbourne, Australia, on Oct. 29, 2021. (James Ross/AAP Image via AP)
Australia

MELBOURNE, Australia—Wild winds in the city of Melbourne and across the Australian state of Victoria overnight tore off roofs, downed trees and left more than 450,000 homes without power.

Energy manager AEMO said Friday the damage was severe and warned that some customers wouldn’t have electricity over the weekend or even by early next week.

The storms came at an awkward time as many people in Melbourne were preparing to travel elsewhere in the state. The weekend marks the first time in months that people will be able to move freely around Victoria after coronavirus restrictions were lifted.

The Victoria State Emergency Service said it received more than 2,500 calls for help, with about 300 people reporting damage to their properties.

One of the hardest hit areas was Red Hill, a tourist spot south of Melbourne. Residents reported trees being ripped out of the ground and a mess everywhere.

Internet service also went offline for about 125,000 households, affecting thousands of people who are still working from home. Some train services were suspended due to the weather. Businesses were also hit by power outages.

Johnson said the winds were caused by an intense low-pressure system moving across the state and were expected to ease Friday evening. The storm also caused damage in the city of Adelaide, leaving 30,000 homes and businesses without power.