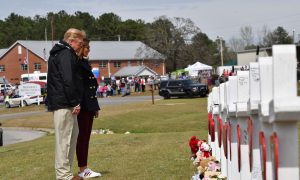 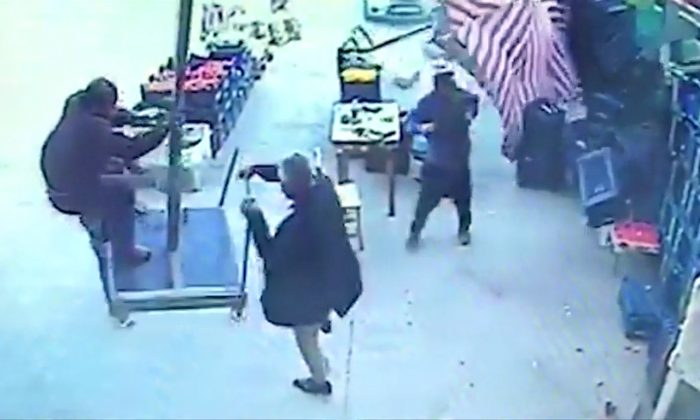 A fresh produce worker went for the ride of his life after trying to stop a large patio umbrella from falling over in strong winds on March 25.

The spine-tingling moment was recorded on closed-circuit television surveillance technology and showed Sadik Kocadalli and two other grocery men running to secure a parasol, which the wind threatened to blow away from a wholesale market hall in the southern Turkish city of Osmaniye.

Kocadalli thought using his body weight by standing on the parasol would be enough to pin it down, but he was wrong.

“When the wind got stronger, I noticed the umbrella moving, so I tried to save it from flying away by stepping on it and, when I stepped on it, it lifted,” he told Turkish news agency DHA, according to Fox News.

After being lifted about 13 feet into the air, Kocadalli jumped off and suffered a minor ankle injury.

The parasol later landed on another man who was knocked unconscious, according to The Independent. The heavy item fell and broke Mehmet Ali Bicakci’s foot and ribs.

The strong winds are believed to have come from a 10-minute tornado that had recently hit a nearby area.

The video of Kocadalli’s brief flight has gone viral, with many people likening his ascent to Walt Disney classic movie Mary Poppins, whose lead character famously flew in with an open umbrella for a nanny job interview.

Could this man rival Mary Poppins?

He got more than he bargained for when he tried to save an umbrella in a small tornado in Turkey. pic.twitter.com/VQgtDNc16s

“He flew away like a turkey,” Mary B Tudor said.

A man in Turkey has been dubbed the country’s first astronaut (or “AstroNOT”) after taking flight at a market when strong winds gusted under an umbrella stand. https://t.co/pD22ZLy67p pic.twitter.com/D0voz93BBM

Some others drew parallels between the tornado in the Metro-Goldwyn-Mayer classic movie The Wizard of Oz and the man’s parasol flight.

“When he finally touched the ground, he said, ‘Oh, Toto, I don’t think we’re in Turkey anymore,” Karim Pluma said.

“So that’s how they are now planning on getting inside the United States,” Ron McAnally said. “I bet he thought he’d end up in Kansas too.”

SCARY: A terrifying moment caught on camera in Osmaniye, Turkey shows a man being lifted into the air. He and two other men were attempting to keep a large outdoor umbrella from blowing away. The man jumped off and was unharmed after being lifted more than 10 feet in the air. pic.twitter.com/5pqSrAsfX8

GONE WITH THE WIND: Strong gusts in Turkey sent a man airborne when he tried to stop a patio umbrella from tipping over pic.twitter.com/XGp4DlL4In