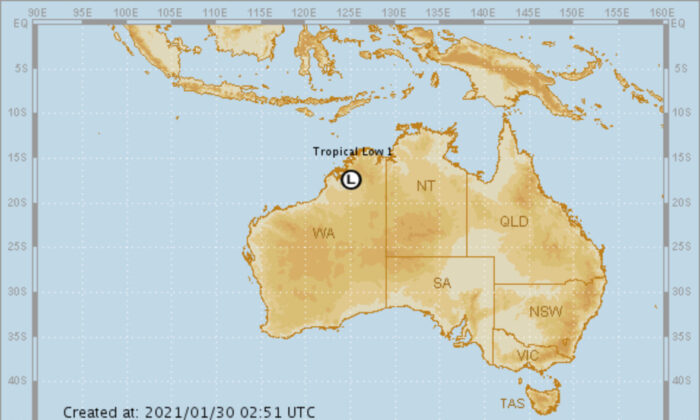 Communities in the West Kimberley and coastal Pilbara in Western Australia have been placed on alert, with the chance of a severe tropical cyclone developing.

It is expected to bring wild wind and flooding over the weekend.

Communities in the West Kimberley and coastal Pilbara have been told to stay alert as a developing tropical low moves down the coast, according to the Bureau of Meteorology.

The affected area spans from Cape Leveque to Whim Creek and includes Broome and Port Hedland, with wind gusts predicted to reach up to 85 km/hr.

The tropical low system currently hanging over the Kimberley could morph into a tropical cyclone offshore, forecasters say, and if it tracks over the ocean close to the Pilbara coast may intensify to a severe degree.

Heavy rainfall is predicted and flood watches have been put in place.

Gales and winds gusts up to 100 km/hr may develop in coastal areas between Cape Leveque and Sandfire on Sunday afternoon.

Meanwhile, a magnitude 5.5 earthquake has struck about 300km north-northwest of the Dampier Peninsula at a depth of 20km.

The quake occurred in the Timor Sea at 6.47 a.m. AEDT but no tsunami warning has been issued, Geoscience Australia said.