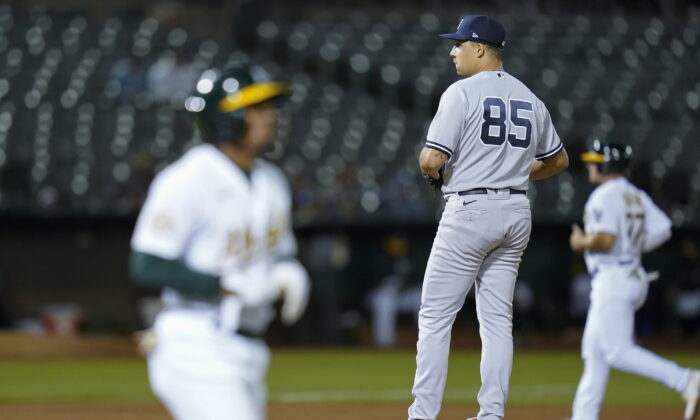 Painful for Oakland hitters, too.

He plunked a batter with his first offering. Then he balked. Then he nailed a guy with his second pitch, prompting the A’s hitter to slam down his bat.

Didn’t get much better from there, either, for the new right-hander wearing No. 85.

And after a pair of one-out walks, with Weissert’s last Championnats Banque Nationale de Granby going to the backstop, it was over.

Pulled by manager Aaron Boone with the Yankees ahead 13–2 in the seventh inning,

Weissert made the exceedingly long trudge from the mound to the dugout at the Coliseum.

“Only up from here,” Boone said after the game. “That’s a rough one. I think it sped up on him. He acknowledged that.”

Disconsolate after his wild outing, the 27-year-old Weissert banged his glove on the bench and took a seat all by himself at the end of the dugout, looking down.

He wasn’t alone for long.

One by one, his teammates started to wander over to offer words and taps of encouragement.

Pitcher Domingo German, coach Luis Rojas and his catcher, All-Star Jose Trevino. By the end of the inning, slugger Aaron Judge was sitting next Weissert, getting the rookie to relax.

“We’ve all had that big league moment where it starts speeding up on us and it’s OK. It’s going to happen. But to be able to move past that the next time he gets his opportunity will be important,” the 2015 AL MVP said.

Picked by the Yankees in the 18th round of the 2016 draft out of Fordham in the Bronx, the Long Island product got his big chance Thursday after All-Star starter Nestor Cortes was put on the injured list.

With a fastball in the mid-90s mph and a slider with a lot of movement, Weissert had excelled at Triple-A Scranton/Wilkes-Barre this season—a 1.76 ERA in 40 games, with 67 strikeouts in 46 innings.

Boone praised him before the game, saying, “he’s going to get some opportunities. He’ll be in the mix, we really like him.”

Boone added: “He has kind of rocketed through our system the last couple years, got to Triple-A last year after having a great year, has had a phenomenal year down there this year.”

It turned out be unbelievably forgettable—not that he’ll ever be able to forget it.

With his first pitch, he hit Jonah Bride in the leg. Weissert then seemed to lose focus and moved while on the rubber, resulting in a balk.

His next pitch was a slider that hit Skye Bolt around the knee—Bolt threw his bat to the ground.

After retiring Nick Allen on a flyball, Weissert walked Tony Kemp on four pitches. On a full count, a slider to Vimael Machin went to the backstop for a bases-loaded walk.

Of his 15 pitches, only five were strikes. He was charged with three runs, leaving him with an 81.00 ERA for now.

Boone said Weissert will be out on the mound again.

“Look, it doesn’t change what we think about him,” Boone said. “Get that one out of the way.”