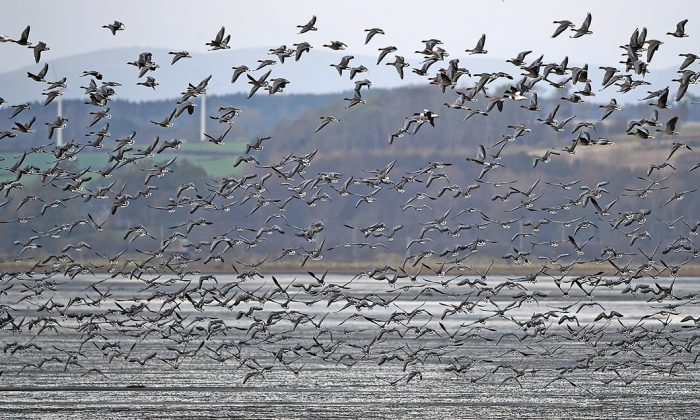 The capital of Colorado is having such a problem with wild geese that the city council has decided to kill thousands of the birds and feed the meat to the needy.

The most common complaint people make to the City of Denver’s Parks and Recreation team is the high volume of goose excrement covering the ground in city park areas.

The high level of public dissatisfaction has prompted the city to work with the United Stated Department of Agriculture (USDA) to create a plan to reduce the number of wild geese by culling the flock and using them as a nutritious meal for the homeless and destitute.

“It had gotten to the point where the parks were being almost unenjoyable for a lot of people. That is why we moved forward with this plan,” Denver Parks and Recreation Executive Director Scott Gilmore told CBS.

The city has tried many peaceful means to control the goose population for at least eight years without much success. This has included oiling goose eggs, reducing available food sources, spraying chemical repellents onto potential food, erecting fences in different parts of the park, and installing deterrents to scare the geese away.

“Fewer eggs have hatched in parks over the past years due to increased egg oiling, yet there continues to be a gradual increase in the city’s resident population each migration season,” the city said on its website. “While oiling, hazing and repellent will continue to be used, other tactics must be considered for effective population management.”

Parks play a vital role in the physical & environmental health of the city & residents—they will continue to be a habitat for Canada Geese but the growing resident population causes several park mgt. issues that require a multi-strategy plan. Learn more: https://t.co/ABkuvvEhUt

Gilmore has made it his first order of business to manage the city’s geese population, and he describes the poop as a nuisance, harmful to waterways, and even a potential health hazard.

This is a huge problem because Geese can not LEGALLY be touched by any person or other agency except for 1 (forgot the name) & they dont even answer the phone or return messages I called them 1nce cause Geese laid eggs in a patch of grass in a huge busy parking lot it was awful..

The city and USDA now plans to capture up to 2,200 geese, transport them to a processing facility, and give the meat to families in need.

“Denver Parks and Recreation (DPR) has received authorization from both the state and federal government to manage its goose population via roundups with the requirement that the USDA conducts the roundups and assists DPR in developing a long-term goose management strategy,” the city website said. “DPR will refer to the USDA to determine whether meat is suitable for human consumption and will be donated to charitable organizations and wildlife rehabilitation facilities.”

The USDA maintains that all meat served will be safe to eat and will help reduce unnecessary waste.

“We did not want them to end up in a landfill,” Gilmore told CBS. “Legally they can do that but we would not have moved forward with this project without finding a solution to where those birds were going to go.”

There is a potential for the wild geese culling and meat processing to happen annually, depending on the outcome of an evaluation the city conducts each year.

“DPR will assess and evaluate effectiveness of the current multi-strategy approach used to maintain healthy habitats in Denver parks,” the city website said. “Effectiveness is evaluated by [the] amount of goose droppings in parks, waterfowl species diversity, reduced impacts to park and golf landscapes, vegetative growth and recovery, [and] overall park habitat health.”

Gilmore added that the plan cannot just be limited to removing the goose excrement from the city parks.

“It’s actually about improving the habitat of our parks,” he told CBS. “We’ve built beautiful parks that are great for people but also great for geese.”