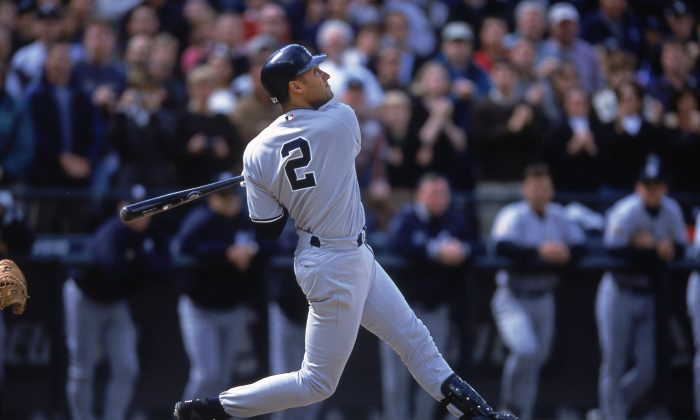 Derek Jeter #2 of the New York Yankees watches the ball after hitting it during the game against the Seattle Mariners at Safeco Field in Seattle, Washington. The Yankees defeated the Mariners 2-1.(Otto Greule Jr /Allsport)
Baseball

The Wild Card was added to baseball’s postseason in 1995 as another wrinkle to expand it’s formerly ultra-exclusive postseason to a third round—the Division Series. With that change, comparing postseason players throughout the ages is like comparing apples to oranges as players now have more at-bats to break long-standing records.

Here we’ll compare apples to apples and bring you the All-Playoff hitting team for those of the Wild Card era. We’ll include only those players who’ve participated in the postseason since 1995 and select only the greatest at each position that have come through in the clutch for their teams. Here we go:

Catcher—Javy Lopez: The Braves made the postseason every year from 1995–2005 but only once did they win the World Series. Was it disappointing? Sure. But Lopez didn’t disappoint. He was a career .278/.324/.493 (average/on-base/slugging) hitter in the postseason and became the one person in the Braves lineup with ice in his veins in October. Lopez hit .542 in the seven-game NLCS against St. Louis in 1996 and was named MVP of the series.

Runner up—Yadier Molina: Hit the crucial two-run blast in ninth inning of a tied Game 7 in the 2006 NLCS.

First Base—Albert Pujols: Pujols has been quite a disappointment with the Angels recently but he was aces for the Cardinals—playoffs and regular season. In 15 postseason series Pujols has put up an incredible .330/.439/.607 line and has a three-home run World Series game included on his postseason resume.

Second Base—Chase Utley: Utley is a career .262/.402/.500 playoff hitter with 10 home runs and 25 RBIs through 10 series with the Phillies. His greatest series ever was on the biggest stage—the 2009 World Series against the vaunted Yankees—when he hit five home runs and drove in eight runs in just six games for a slugging percentage of 1.048. Though Philadelphia lost, Utley won the respect of all those watching.

Runner Up—Adam Kennedy. Kennedy, who never hit more 13 home runs in a single regular season, hit 3 in the 2002 ALCS and was a career .308 postseason hitter.

Shortstop—Derek Jeter: No one has more postseason at-bats than Jeter’s 650—and no one else is even close. Jeter’s been consistently great through the years in putting up a .308/.374/.465 postseason line with a playoff-record 200 hits—20 of them being home runs, including a crucial shot, controversially caught by infamous fan Jeffrey Maier, in Game 1 of the 1996 ALCS.

Runner Up—Nomar Garciaparra: Hit .321 in 112 postseason at-bats for the Red Sox and Dodgers.

Third Base—Troy Glaus: Glaus owns a career postseason line of .321/.398/.756 with nine home runs and 16 RBIs in just 24 playoff games. He had a postseason to remember with the Angels in 2002 when he hit 7 home runs in just 16 games for the World Champion Angels. Two years later he hit a couple more blasts in a three-game set in a losing cause against Boston.

Outfield—Carlos Beltran: Beltran, after years of playing for a losing squad in Kansas City busted onto the postseason scene in 2004 with Houston and has been playoff-clutch ever since. He hit 8 home runs in Houston’s two series that year and has 16 through his first 44 playoff games, to go along with a .327/.443/.717 batting line. He’s also perfect in 11 stolen base attempts and is a pretty good outfielder to boot.

Outfield—Marquis Grissom: A surprise on this list, for sure, as Grissom hasn’t played in the majors since 2005 and most of his best years were on non-playoff teams in Montreal. But Grissom made a huge playoff impact for the Braves in 1995–1996 hitting .345 while slugging three home runs in his first ever series against the Rockies in the NLDS. He’s a career .317 career playoff hitter in 218 at-bats with Atlanta, Cleveland, and San Francisco.

Outfield—Manny Ramirez: Manny being Manny has led to more postseason home runs (29) than anyone else and his .285/.394/.544 batting line, through 410 at-bats, is pretty good as well. Ramirez was consistently great more than anything else, hitting exactly two home runs in 12 of his 23 series though never getting to three. His best may have come with the Dodgers in 2008 when he drove in seven in a five-game set in the NLCS against the Phillies while putting up a ridiculous .533/.682/1.067 batting line.

Designated Hitter—David Ortiz: Ortiz has a respectable .276/.386/.526 postseason line, but it’s the timeliness of his hits that put him on the first team here. His grand slam against Detroit Sunday night was just another notch on his epic playoff belt. His heroics in 2004—back-to-back walk-off hits against the Yankees while facing elimination—are legendary.