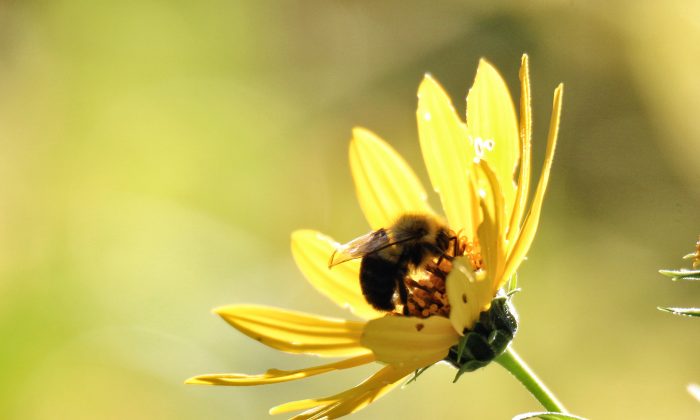 For Wild Bees on Farms, the More the Merrier

Farmers should worry about how many individual wild bees they have pollinating their fields, not how many kinds of bees, according to new research.

In their study of fruit plants in New Jersey, Pennsylvania, and California, ecologist Rachael Winfree and her coauthors find that the abundance of a few dominant species of wild bee is more important than the diversity of bee species pollinating crops.

Wild bees don’t have to be managed. Given the right conditions, they just show up.

“This is not to say that biodiversity is unimportant—far from it,” says Winfree, an associate professor of ecology, evolution, and natural resources in the Rutgers School of Environmental and Biological Sciences.

“Biodiversity is a good thing to have for the environment in general, but for the pollination of a particular crop plant, it’s better to have more individual bees.”

The recent problems facing European honeybees—the bees that farmers and beekeepers raise specifically to pollinate their crops—have been in the news in recent years, but wild, or “native” bees also are vital to pollination.

Thousands of species of wild bees are responsible for pollinating about 80 percent of flowering plants around the world, according to Winfree’s earlier research, and are particularly vital to the plants Winfree and her coauthors studied.

Winfree and her coauthors wanted to know whether it was more important to pollination to have many species of wild pollinators, which is what many laboratory and field experiments had indicated.

“Lots of experiments and studies done in labs or controlled field settings show that if you have more species you get more of some ecological function, like pollination,” Winfree says. “Do you get the same finding when you go out to big scale on actual farms in the real world?”

Until recently, scientists lacked good analytical tools for understanding data from farms and ecosystems functioning as they naturally do, 24 hours a day, seven days a week. “The real world is noisy,” Winfree says.

Coauthor Jeremy Fox, associate professor of ecology and evolutionary biology at the University of Calgary, found a way to sort through all the noise by applying a mathematical formula originally developed to describe genetic changes over time—the Price Equation.

Applying it to the farms under study—some for two years, some for three—allowed Winfree, Fox, and their colleagues to see that having only a few species of wild pollinators didn’t hurt pollination, and having a lot of individual bees on the job helped a lot.

Wild bees don’t have to be managed. Given the right conditions, they just show up.

“Farmers can plant fallow fields and road edges with flowering plants, preferably plants whose flowering periods overlap,” Winfree says. “They can leave piles of excavated earth when they dig a ditch or a pond, which will give ground-nesting bees a place to live and flowering plants a place to grow. And farmers can work with their neighbors to make the edges of their property bee-friendly as well.”

Their research appears in Ecology Letters and Nature’s “Research Highlights.”