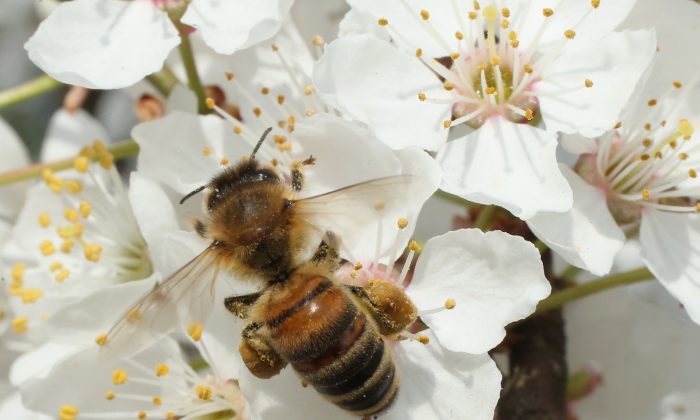 A bee harvests pollen from the flowers of a wild cherry tree near Berlin on April 25, 2013 in Blankenfelde, Germany. (Photo by Sean Gallup/Getty Images)
Environment

The dramatic decline of bee populations has had scientists worried for some time now.

After all, insects are responsible for pollinating 35 percent of the world’s crop production, according to the United Nation’s Food and Agriculture Organization (FAO).

Many American farmers rely on renting European honeybee hives to pollinate their crops, but the species has been on the decline due to colony collapse disorder, a phenomenon where worker bees disappear from the colony and leave behind the queen. Scientists still haven’t figured out why it happens.

The honeybee crisis has made wild bees ever more crucial to human crop production. A study published in April confirmed that a commonly used pesticide was doing damage to wild bees. The scientists compared the bee population in patches of landscape where canola crops were coated with pesticide and in areas where it wasn’t. They found less bee density, less reproduction, and less colony growth in the areas with pesticide.

They also discovered that a class of fungicides labeled “safe for bees” are actually contributing to the damage to wild bees.

For two years, the researchers examined wild and honeybee populations in 19 apple orchards in central and western New York.

They marked the orchards based on how much pesticide was being used on them (from low to high use), and also kept track of the natural landscape surrounding the orchards, according to the study published in the June issue of the journal Proceedings of the Royal Society B.

‘Safe’ Pesticide Could Be An ADHD Culprit

The scientists found that the number of wild bees and the number of bee species fell as the pesticide use on the orchards increased.

But they also discovered some good news: The damage to wild bees was stymied when there were natural areas surrounding the orchards. With more natural habitat, there was less pesticide impact on the bees.

The pesticides didn’t have any effect on the honeybee population. The researchers predicted that this was because the honey beehives are only brought to the orchards during blooming season, then removed.

There are more than 20,000 known species of bees. To make use of their beneficial pollination of orchard crops like watermelons, squashes, and blueberries, the researchers suggested that orchard growers consider the importance of the natural landscape when deciding how much pesticides they use on their crops.