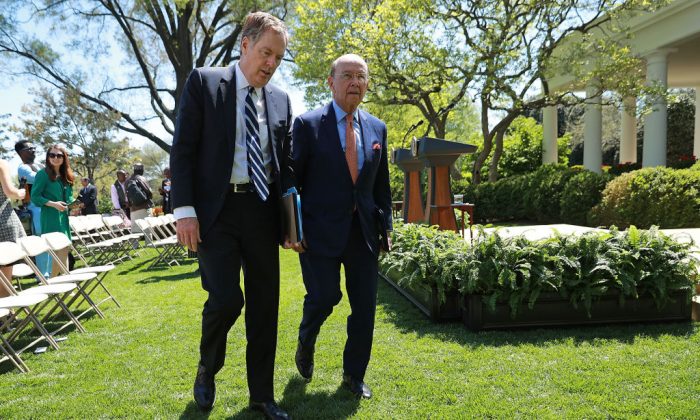 WASHINGTON—It has been almost a year since the United States and the European Union (EU) reached an agreement to eliminate tariffs on industrial goods. Talks with the EU, however, are an “early stage work in progress” and signing a new trade deal will take a while, according to Secretary of Commerce Wilbur Ross.

In July last year, President Donald Trump and European Commission President Jean-Claude Juncker agreed to work together toward zero tariffs, zero non-tariff barriers, and zero subsidies on all industrial goods other than cars.

There have been several rounds of trade talks between U.S. Trade Representative Robert Lighthizer and EU Trade Commissioner Cecilia Malmström in recent months. However, there has not been any meaningful progress on the stated goals.

“We feel that agriculture should be part of it. A lot of member states of the EU have a different view,” Ross said at a press conference on June 11.

A critical difference between the negotiating mandates of both sides is agriculture. The EU’s mandate considers removing tariffs and non-tariff barriers on industrial goods only, while Washington’s objective includes agricultural products.

“It’s a very complicated situation because while the EU is one entity representing all of those countries, at the end of the day, it has to be approved by each country,” Ross said.

Europe’s recent parliamentary elections and the upcoming change in the composition of the EU Commission have added another layer of complexity to the situation.

“There very likely will be a whole new set of parties with whom to negotiate a transaction,” said Ross. “So my guess is it’s going to take a while to know whether there is any real prospect of a new agreement with the European Commission.”

Progress in the U.S.–EU trade talks has grounded to a near-halt, according to Bart Oosterveld, director of the global business and economics program at the Atlantic Council, a Washington-based think tank.

“Aside from the question of whether agriculture should be included in the talks, another hindrance to progress has been the continued U.S. threat of tariffs of up to 25 percent on European car and auto parts,” he wrote in a blog on June 7.

The White House announced a six-month delay on May 17 to the decision on whether to impose tariffs on autos and auto parts. Trump directed Lighthizer to negotiate agreements within 180 days to address the national security threat arising from auto imports.

Goldman Sachs predicts Washington and Brussels will ultimately reach a deal to avoid car tariffs, “but we see a 20 percent risk of U.S. auto tariffs, with subsequent EU retaliation.”

However, the EU’s “commitment to the WTO process limits the scope and speed of retaliation,” a Goldman Sachs report states. Taking the steel tariffs as an example, the bloc retaliated on only 44 percent of the European steel exports affected by U.S. tariffs, the report says.

The U.S. goods trade deficit with the EU was nearly $170 billion in 2018, which is a top concern for Trump. He has repeatedly accused the EU of taking advantage of the United States on trade.

The EU “treats us, I would say, worse than China,” Trump said at the National Association of Realtors event on May 17.

European tariffs on U.S. vehicles entering the European market are 10 percent, while the U.S. tariff on imported vehicles is only 2.5 percent. And the EU sells more than three times as many autos to America as America sells to the bloc.

And on average, the EU charges higher tariffs for U.S. goods, according to a Citi report. For example, the weighted average most-favored-nation tariff rate for agricultural products is higher in the EU (4.8 percent) than in the United States (2.3 percent).