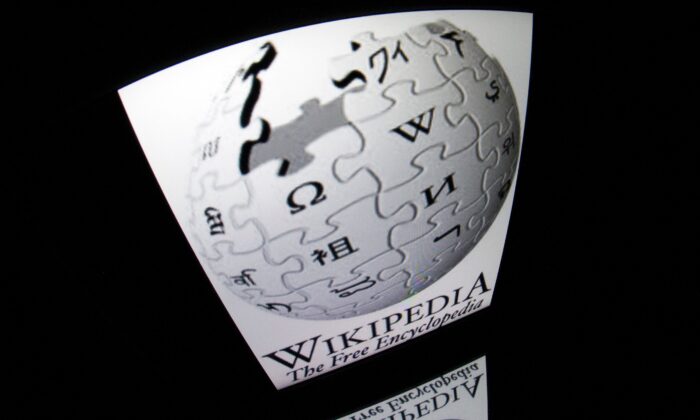 The "Wikipedia" logo is seen on a tablet screen in Paris, France on Dec. 4, 2012. (Lionel Bonaventure/AFP via Getty Images)
Chinese Regime

The Wikimedia Foundation, a U.S. nonprofit that hosts Wikipedia, has banned seven mainland Chinese users from its websites and revoked administrator access for 12 others, in a case that was described by its vice president as “unprecedented in scope and nature.”

Maggie Dennis, the Wikimedia’s vice president of community resilience and sustainability, announced the penalty in an email on Sept. 13 to Wikimedia members. She said the foundation made the decision after “long and deep investigations” into some members of the Wikimedians of Mainland China (WMC) user group.

Dennis did not provide detailed explanations over what the 19 users had done, but only said that there was a “security risk” with “infiltration concerns.” For the 12 users who had administrator access, she appeared to suggest that they had engaged in or were connected to election canvassing.

“We have also reached out to a number of other editors with explanations around canvassing guidelines and doxing policies and requests to modify their behaviors,” Dennis wrote. “We need to make sure that the [Wikipedia] community can hold fair elections, without canvassing or fraud.”

Wikipedia holds elections to choose experienced editors to become administrators, who are granted technical abilities to perform tasks such as blocking users, deleting a page, and protecting pages from further editing. As a result, the administrator role has become a coveted position as there have been editing wars breaking out on Wikipedia over its content.

The ban could be related to threats that Chinese Wikipedia users directed against members of Wikimedia Community User Group Hong Kong (WMHKG), in an editing war over Hong Kong protest events.

In July, Hong Kong Free Press (HKFP) disclosed that mainland Chinese Wikipedia users were discussing on Chinese social media about reporting their Hong Kong peers to the city’s national security police. A screenshot of the discussion obtained by the Hong Kong outlet showed a user with the name “Walter Grassroot.”

“Walter Grassroot” was one of the seven users banned, according to a Wikipedia page.

According to HKFP, “Walter Grassroot” is a man living in China’s coastal Jiangsu Province, who shares Beijing’s views on Hong Kong and Taiwan. He also took down many news links from the now-defunct Apple Daily on Wikipedia in July.

Beijing sees pro-democracy protesters in Hong Kong as “rioters” and views Taiwan as a part of its territory. Apple Daily—known for publishing articles supportive of Hong Kong protesters and critical of the Chinese Communist Party (CCP)—saw its executives arrested and assets frozen in June after a national security investigation was announced targeting the media firm.

WMHKG is recognized by the Wikimedia Foundation, while the WMC is not. All versions of Wikipedia have been banned in China since April 2019.

Dennis said some users were “physically harmed” because of such infiltration.

Another form of infiltration involved “not only people deliberately seeking to ingratiate themselves with their communities in order to obtain access and advance an agenda contrary to open knowledge goals, but also individuals who have become vulnerable to exploitation and harm by external groups because they are already trusted insiders,” she said.

Dennis wrote that she will host an office hour in the coming weeks to discuss infiltration and other issues, including how to prevent “community capture” in future elections.

The foundation will host a public session in the next few weeks to address these issues as well as to discuss how it can approach future elections to avoid “community ‘capture,’” Dennis said. “We need to make sure that the community can hold fair elections, without canvassing or fraud.”

“We hope to connect with the international Chinese language community in the near future to talk about approaches to elections that avoid the risk of project capture and ensure that people are and feel safe contributing to the Chinese language Wikipedia,” she added.

The WMC issued a statement slamming Wikimedia as having been “instigated by certain individuals within the Chinese Wiki community.” It added that the foundation’s decision was “unfounded.”

The Wikimedia Foundation did not immediately respond to a request for comment.