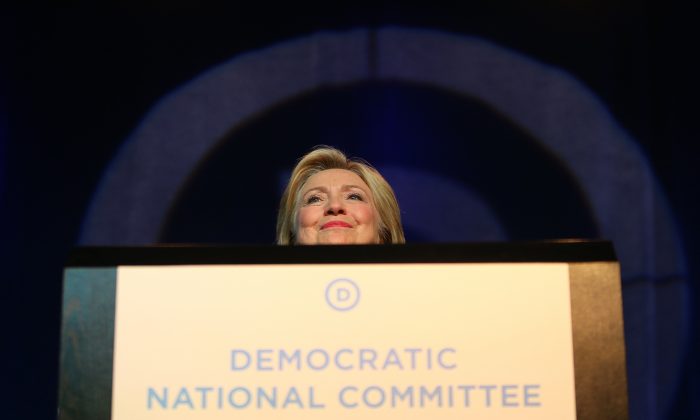 Democratic Presidential candidate Hillary Clinton speaks at the Democratic National Committee summer meeting on August 28, 2015 in Minneapolis, Minnesota. Could Clinton or her aides be in legal jeopardy if they sent classified information over unsecure email while she was secretary of state? Experts in government secrecy law see almost no possibility of criminal action in the Clinton case, given the evidence that has so far been made public. Clinton’s case appears to differ markedly from those of other prominent government officials who got in trouble for mishandling classified information, including former CIA director David Petraeus, who gave top secret information to his paramour, and former CIA director John Deutch, who took highly classified material home with him. (Adam Bettcher/Getty Images)
Politics

More than 19,000 emails and 8,000 attachments from top Democratic National Committee officials were released by WikiLeaks on July 22.

The trove of documents, which also includes voice memos, are part one of a new “Hillary Leaks” series, WikiLeaks said on its website.

The emails span from January 2015 to May 25, 2016. WikiLeaks did not say how it obtained the files, but the DNC server was hacked in June by a hacker named “Guccifer 2.0,” who claimed to have passed on a heap of files to Wikileaks.

The leak comes days before the 2016 Democratic National Convention in Philadelphia from July 25 through July 28.

One of the emails, sent from DNC Chief Financial Officer Brad Marshall to the DNC CEO, as well as the communications director and deputy director, suggested that the party should “get someone to ask” Democratic presidential candidate Bernie Sanders about his religious beliefs.

“It might may no difference, but for KY and WVA can we get someone to ask his belief. Does he believe in a God. He had skated on saying he has a Jewish heritage. I think I read he is an atheist. This could make several points difference with my peeps. My Southern Baptist peeps would draw a big difference between a Jew and an atheist.”

MSNBC’s Chuck Todd and the DNC

The released emails show MSNBC’s Chuck Todd and DNC communications staff emailing on how to deal with a possible interview between MSNBC’s Mika Brzezinski’s and DNC chair Debbie Wasserman Schultz. Brzezinski had called Wasserman Schultz biased in the primaries in May and called for her resignation.

“Hey Chuck, per our conversation earlier today, I’d appreciate it if you passed along the following to the Morning Joe team. I understand Joe and Mika will say whatever they’re going to say in terms of opinion, but at a minimum they should consider the facts on some of the key allegations they’re making.”

“Between us, You think the call is a good idea?”

“Not necessarily. If Mika just doesn’t like her, I’m not sure it’s worth either of their time. I’ve lowered her expectations, but don’t know. If you think Mika is set in stone I’m happy to kill it.”

Miranda wrote to Mark Paustenbach in May:

“Wondering if there’s a good Bernie narrative for a story, which is that Bernie never ever had his act together, that his campaign was a mess.”

The email added that DNC chair Debbie Wasserman Schultz (DWS) had to directly call Sanders “in order to get the campaign to do things because they’d either ignored or forgotten to something critical.”

“It’s not a DNC conspiracy, it’s because they never had their act together.”