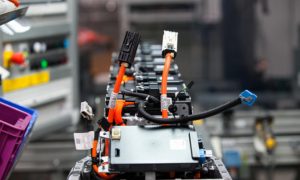 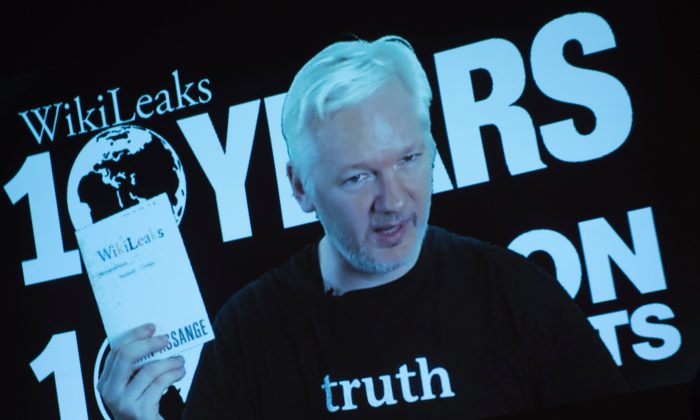 Julian Assange, founder of the online leaking platform WikiLeaks, is seen on a screen as he addresses journalists via a live video connection during a press conference on the platform's 10th anniversary in Berlin on Oct. 4, 2016. (STEFFI LOOS/AFP/Getty Images)
US

A former British ambassador to Uzbekistan who is close to WikiLeaks founder Julian Assange told the Daily Mail that Russia didn’t leak emails from the Hillary Clinton campaign and Democratic staffers to the anti-secrecy organization.

Craig Murray, who describes himself now as a WikiLeaks operative, told the tabloid that he flew to Washington, D.C. to receive files from a source, whom he described as a Democratic Party whistleblower. He said that there were no hacks involved, as has been claimed by CIA sources in several new media reports—namely one from Washington Post that claimed Russia-backed hackers swayed the election in Donald Trump’s favor over Hillary Clinton.

“Neither of [the leaks] came from the Russians,” said Murray on Tuesday. “The source had legal access to the information. The documents came from inside leaks, not hacks.”

I don’t understand why the CIA would say the information came from Russian hackers when they must know that isn’t true.
— Craig Murray, WikiLeaks

As the Mail noted, Murray’s links to Assange and WikiLeaks are well-known. Previously, he was removed from his post as an ambassador for Britain for alleged misconduct but was later cleared of any wrongdoing. He spoke out frequently against Uzbekistan’s human rights situation during his tenure.

In the interview, he touched on both the DNC leaks published by WikiLeaks right before the Democratic National Convention in July as well as leaked emails from top Clinton adviser John Podesta’s Gmail account that were published daily starting in October. The New York Times reported on Dec. 12 that Podesta likely was hacked due to a simple phishing email attack, with an aide to him blaming it on a typo he made.

He said the emails were given to the anti-secrecy organization via Americans who had access to the information through legitimate channels.

The leakers, he added, were pushed to release the emails out of “disgust at the corruption of the Clinton Foundation and the tilting of the primary election playing field against Bernie Sanders.”

In the emails, it was revealed that the DNC attempted to push out Sen. Sanders in favor of Clinton during the Democratic primary, which lead to the resignation of its then-chair, Debbie Wasserman Schultz, right before the convention.

Murray claimed he received a package from a source during a clandestine drop-off near American University located at a wooded area in Washington, D.C. The person he received the information from was an intermediary, not the person who first acquired the emails.

He declined to reveal further information about the sources, which is consistent with what WikiLeaks and Assange have said over the years regarding their sources.

Following allegations of Russian-backed hacks, Murray said he felt compelled to speak out.

“I don’t understand why the CIA would say the information came from Russian hackers when they must know that isn’t true,” he said.

“Regardless of whether the Russians hacked into the DNC, the documents Wikileaks published did not come from that.'”