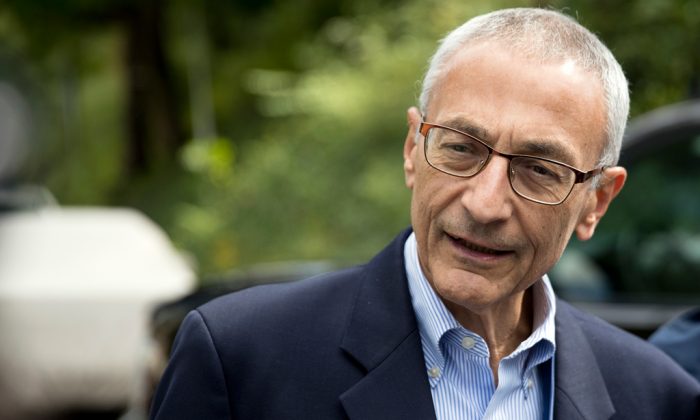 Hillary Clinton campaign chairman John Podesta speaks to members of the media outside Clinton's home in Washington on Oct. 5, 2016. (AP Photo/Andrew Harnik)
US

'Dump those emails,' said Podesta
By The Associated Press

As early as last December, the Clinton campaign was plotting ways to sideline the head of the Democratic Party amid complaints about internal fights in the party’s leadership, according to the latest WikiLeaks release of hacked emails.

Among the options for Florida Rep. Debbie Wasserman Schultz was neutralizing her and then forcing her out after the Democratic National Convention in Philadelphia in July. Other options forwarded by top campaign aide Heather Stone would have kept Wasserman Schultz in place but in a weakened capacity as a figurehead or a co-chairwoman who would cede power to a “general election chair” named by Clinton.

Breaking: Finally! New WikiLeaks Email…”We Are Going To Have To Dump All Those Emails”#WikiLeaks pic.twitter.com/JbEy360O1V

The memo urged “systemic shifts at the DNC leadership level” to help Clinton win a general election. The memo was part of the latest trove of emails stolen from Clinton campaign chairman John Podesta and released Tuesday.

“Though we have reached a working arrangement with them, our dealings with party leadership have been marked by challenges, often requiring multiple meetings and phone calls to resolve relatively simple matters,” Stone’s memo said. “We are frequently caught in the middle of poor communication and a difficult relationship between the chairwoman and the executive director.”

Wasserman Schultz announced her resignation just before the DNC convention this past summer after an earlier WikiLeaks hack of DNC emails showed party officials had favored Clinton over challenger Bernie Sanders. The party apparatus was supposed to stay scrupulously neutral during the primary campaign.

Wasserman Schultz was replaced on an interim basis by Donna Brazile.

The Clinton campaign memo floated former Michigan Gov. Jennifer Granholm as either the general election chair or as a replacement for Wasserman Schultz.

The latest email release also reveals that immediately after The New York Times broke the news that Hillary Clinton and her aides had used private accounts to conduct State Department business when she was secretary, chairman John Podesta told Cheryl Mills, an attorney and chief of staff to Clinton, that “we are going to have to dump all those emails” and that it was “better to do so sooner than later.”

Podesta didn’t say what he meant by “dump” — and the campaign hasn’t responded to queries about the hacked email trove.

About a week later, Clinton addressed the issue, saying that about half the 60,000 emails were work-related and she had turned them over to the State Department. The rest were personal and withheld. She said most were sent to other officials in the department on their government accounts, so they were archived anyway.

Another hacked email reveals that as Clinton prepared to announce her candidacy last year, she wanted the Clinton Foundation to continue to accept contributions from foreign governments. An email from Clinton Foundation Senior Vice President Maura Pally to Mills on April 7, 2015, contains a memo that laid out proposed changes to the foundation if Clinton ran for president. It says Clinton would resign from the foundation board and not participate in any fundraising for it, which she did.

“Secretary Clinton’s preference is for the foundation to continue to accept foreign government contributions, but to significantly increase disclosure. She does not want to limit the foundation’s ability to operate programs now or in the future,” the document states.

Another email chain contains a message from pollster and strategist Joel Benenson warning that if the foundation continues to take foreign contributions it could be a loser politically.

“We’re going to be very vulnerable on that throughout and I think our opponents and some on our side will say at is unseemly for a potential U.S. president taking money from foreign governments for her private foundation,” Benenson wrote.

The foundation announced in August that it would no longer accept money from foreign governments or corporations if Clinton is elected.