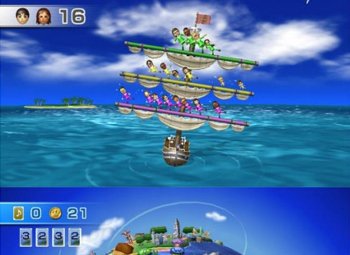 By James Bishop
Print
Nintendo Wii is gearing up for the release of the new game Wii Party, which has been described as a cross between Mario Party and the already popular Wii Sports line.

The game will be specifically formatted for interaction with the Wii interface featuring a handheld remote that is sensitive to movement. Users will be able to control their virtual party members with the flick of their wrist much like the popular Wii Tennis and Super Mario Brothers: Wii. Wii developers are doing their best to make sure the first party game for Wii leaves players wanting more.

“The developers are spending significant time for this title so that they can include elements that are must-haves in a party game … We are developing it with the intent that every Wii player will be able to find a game that can be enjoyed,” said Nintendo President Satoru Iwata in recent business presentation.

The individual characters are known as Miis that will engage in different party situations that will manifest in wide array of creative settings.

“According to our own survey, we know that more than 160 million Miis have been created by our customers in Japan, the U.S. and six countries in Europe alone,” said Iwata.

The usual Nintendo style landscapes will be built upon and expanded. Screen shots of the new game design are available for viewing at Nintendo.com.

Nintendo is also promoting Super Mario Galaxy 2 that first came out in Japan and is now being marketed in Europe as well as the US. Wii Party are both expected to do well with sales similar to Super Mario Galaxy that has sold more than 8 million units world wide.