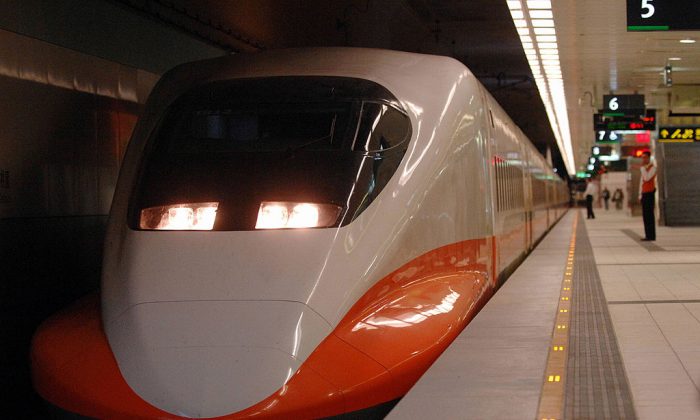 A security staff stands next to a Taiwan High-Speed train at Taoyuan station, on Nov. 30, 2006. (Sam Yeh/AFP/Getty Images)
By Frank Fang

Security concerns are being raised about the Wi-Fi provided on Taiwan’s mass transit network, after revelations aired at a recent parliamentary hearing.

Taiwanese legislator Cheng Pao-ching said that Speedlink—the Taiwanese company contracted to provide free 4G Wi-Fi on parts of Taiwan’s metro, railway, and high-speed railway—could, in fact, be controlled by Chinese company Comba Telecom Systems Ltd., given that both companies are registered at the same address.

Cheng raised the concern at a transportation committee hearing on March 18, according to local media. The legislator, however, didn’t say how he obtained this information.

The primary concern about Comba stems from the fact that its current president Xu Huijun is a former executive vice president of Chinese tech giant ZTE Corp., according to Cheng, who added that ZTE has links to the Chinese regime’s People Liberation Army (PLA).

The Chinese regime considers Taiwan as a renegade province, despite the fact that the latter is a de facto independent country with its own elected officials, constitution, military, and currency. Beijing has never renounced the use of military force to unite the island country with the mainland.

Chinese news portal Sohu reported in August 2018 that Xu decided to take up Comba’s executive position for an annual salary of more than 3 million HKD ($439,368). According to the news site, Xu worked at ZTE from 1998 to July 2018, during which time she once held the position of chief technology officer.

ZTE’s ties with the Chinese military run deep, as detailed in a July 2018 article by Foreign Policy. ZTE is partially owned, indirectly, by two state-run entities: China Aerospace Science and Technology Corporation (CASC) and China Aerospace Industry (CASIC). Both of these entities are directly owned by the State-owned Assets Supervision and Administration Commission of the State Council (SASAC), an agency under China’s cabinet-like State Council.

While the CASC and CASIC sit under the SASAC, they report to the PLA, which maintains liaison offices inside various units within both organizations, according to Foreign Policy.

U.S. officials have long raised security concerns about ZTE’s products, as well as those concerning fellow Chinese tech giant Huawei, which they say can be used by Beijing for espionage.

In April 2018, the United States banned U.S. suppliers from doing business with ZTE. The export ban was imposed after it was found that the company violated the promises it made in court to rectify its behavior, after it pleaded guilty to breaching sanctions against Iran in 2017 by illegally shipping U.S. goods and technology to the country.

The ban was later lifted after the Chinese tech giant agreed to pay a $1 billion fine.

The Overseas Chinese and Foreign Investment Commission, an agency under Taiwan’s Ministry of Economic Affairs, said in a March 19 statement that it screened and reviewed Speedlink’s shareholders in 2011, and found that none of them were based in China, according to Taiwan’s Central News Agency (CNA).

The Commission said it will launch an investigation into the matter, and demanded that Speedlink disclose its investment sources and the names of all of its shareholders. Taiwan’s security bureau and investigation arm of Taiwan’s justice department will also assist with the investigation.

An unnamed official at Taiwan’s National Communications Commission (NCC) told CNA that it was the NCC’s position that telecommunications equipment made in China must not be used on 4G or 5G networks across the country’s rail systems.

Chang Kuo-cheng, a professor of political science and international relations at Taipei Medical University, said in an interview with the Taiwanese edition of The Epoch Times that if Speedlink is found to be an agent of Comba, this could be a violation of Taiwan’s cross-strait relations law. The law sets limits on what Chinese companies can do in Taiwan.