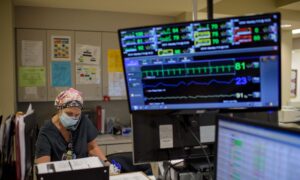 US Hospitals Targeted in Wave of 'Coordinated' Ransomware Attacks
0
US

Wife Plays Brilliant Prank on Husband Years After Her Death

A woman has shared her deceased mother’s prank that unfolded years after her death.

Antonia Nicol shared the prank, which was thought up by her mother before her mother’s death, and played on her father.

It started just before her mother Phedre Fitton passed away, when she gave her husband Nigel strict instructions.

“Before my mum passed away, she gave my dad strict instructions to water the plants in the bathroom. He’s been religiously watering them & keeping them alive,” Antonia Nicol wrote on Twitter.

“They look so amazing he decided to take them to his new home, only to discover they are plastic! Can hear my mum chuckling.”

@dannywallace my dad has loved this story being on here so much, he's reenacted watering the ferns ??? pic.twitter.com/1NJpoYbpY8

She later shared a picture of her father re-enacting his dedicated watering.

“Honestly, we were all so proud of my dad being so dedicated to caring for her plants. Gave him something to do,” she said.

Nicol noted her mother died four years ago after a battle with cancer. “She was very funny. Had a cheeky sense of humor for sure,” she wrote.

The post quickly went viral, garnering over 100,000 likes, hundreds of comments, and tens of thousands of shares.

“She’d fought cancer for 5 years but it beat her in the end in November 2013. My parents live in South Africa whilst I live here, so it was a very difficult time for us all,” she said.

“When my dad found out that he’d been watering plastic plants for years, it was so funny for all of us and made us feel like she was still with us.”