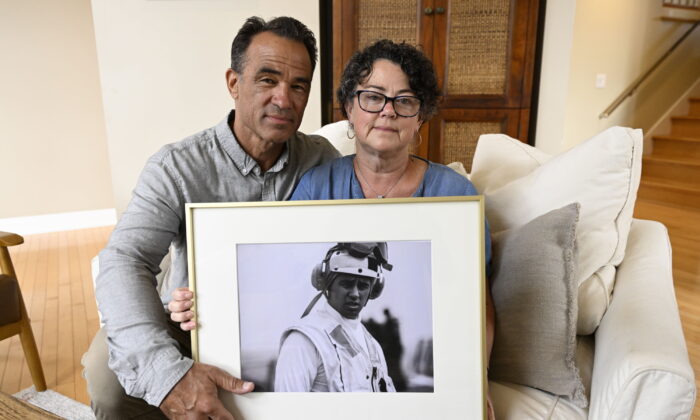 The parents of Lt. Ridge Alkonis, Derek and Suzi, pose with a photo of their son in Dana Point, Calif., on June 1, 2022. (Denis Poroy/AP Photo)
US News

The family of Ridge Alkonis, a U.S. Navy lieutenant who was sentenced in Japan to three years’ prison over a deadly car accident he was involved in last year, is calling on lawmakers and the White House to help bring him home.

Brittany Alkonis, the wife of the 34-year-old specialist in undersea warfare and acoustic engineering who has spent nearly seven years in Japan as a civilian volunteer and naval officer, told Fox News on July 26 that she made contact with Rahm Emanuel, the former mayor of Chicago who was appointed by President Joe Biden as U.S. Ambassador to Japan.

“So, it was a phone call, but I think it was a good one,” she told the network, referring to her conversation with Emanuel. “He does have a good relationship with President Biden and I’m hopeful that that relationship will turn into my husband coming home.”

“I find it nothing short of inexcusable that an American who experienced a medical emergency should be treated so poorly by an Allied nation that he’s protecting,” Lee said.

“Clearly the Japanese judicial system is trying to make an example of Lt. Alkonis—perhaps stemming from a history of disputes over our Status of Forces Agreement,” he added. “He is being targeted because he is an American—and because he was in the unfortunate position of having suffered a medical emergency that resulted in tragedy.”

Rep. Mike Levin (D-Calif.) said he’s deeply concerned over “the Japanese government’s handling of Lt. Ridge Alkonis [and his case],” adding that his office is working with the Pentagon to support Alkonis’s family.

“I will not be giving up on Lt. Alkonis and the Department of Defense must not either,” he said.

In May 2021, Alkonis abruptly lost consciousness in his car after hiking and sightseeing on Mount Fuji with his family. They had climbed a portion of the mountain and were back in the car, heading to lunch and ice cream.

Alkonis was talking with his then-7-year-old daughter when his family says he suddenly fell unconscious behind the wheel. He was so out of it, they say, that neither his daughter’s screams to wake him up nor the impact of the collision roused him.

While he was incapacitated, the car veered into parked cars and pedestrians in a parking lot, striking an elderly woman and her son-in-law, both of whom later died. After the crash, he was arrested by Japanese authorities and held for 26 days in solitary confinement at a police detention facility, interrogated multiple times a day and was not given medical treatment or evaluation, according to a statement of facts provided by a family spokesman.

Alkonis was indicted on a charge of negligent driving, resulting in death, and sentenced last October to three years in prison. The charge carries up to seven years imprisonment in Japan. He has appealed the case.

English-language court records obtained by The Associated Press show that the judge expressed skepticism over the mountain sickness claim, citing an initial statement from Alkonis to police in which he said he felt drowsy after driving through mountainous curves.

Neurologists eventually diagnosed him with Acute Mountain Sickness, which can cause sudden fainting up to 24 hours after rapid altitudinal change.

However, Japanese prosecutors and the judge who sentenced him said that though it was conceivable Alkonis was suffering from light mountain sickness, it was difficult to imagine he went from not feeling drowsy at all to becoming suddenly incapacitated.

Meanwhile, Alkonis’ family told Fox News in June that their son had committed to offering a customary “gomenasai”—or apology—to the family of victims and paid a record $1.65 million “gomenasai” settlement, a highly valued custom in Japan’s justice system to show remorse. However, the naval officer was still sentenced.