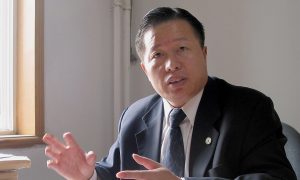 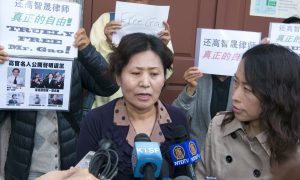 Chinese Rights Lawyer Gao Zhisheng Freed From Prison, but Not Yet Free
0 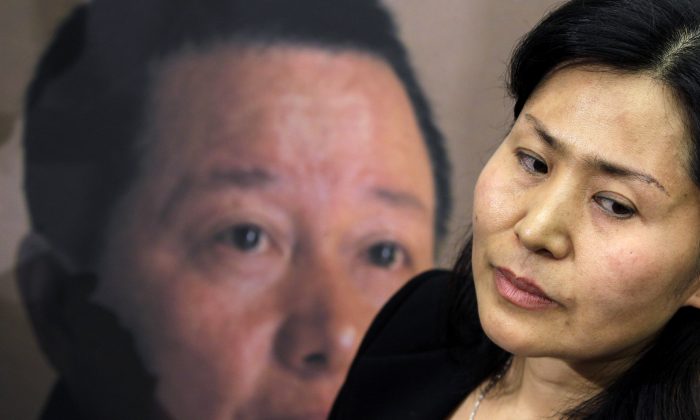 WASHINGTON—Traditional Chinese medicine says that the tooth is the strongest bone in the human body. But in the case of Gao Zhisheng, the renowned Chinese rights lawyer, even the strongest bone could not resist the immense pressure and punishment inflicted by the secret police of the Chinese Communist Party.

Gao had 28 good teeth when he entered prison five years ago—now, 12 are loose, 6 of which, the front teeth, can be easily pulled out by hand. They jangle in his mouth, and hurt. He now consumes painkillers throughout the day to dull the pain, according to his wife, Geng He, who spoke at the National Press Club on Sept. 9.

She had come to Washington for the eighth time to call on the U.S. government to do something about the plight of her husband, one of China’s most prominent human rights lawyers.

Gao Zhisheng was praised by the Ministry of Justice as one of China’s best lawyers over a decade ago, but his persistence in taking up sensitive political cases, including most prominently the systematic torture of practitioners of Falun Gong, made him a target of official persecution beginning in 2004.

He was released from five years of captivity on Aug. 7, but is devastated, physically and mentally, from the experience.

Now Geng He is pushing for the U.S. government to publicly raise the issue with Chinese authorities at the highest levels and ensure that her husband is able to reunite with the family.

“The situation will only change if top U.S. leaders speak out. But I’ve found that President Obama has never publicly expressed concern about Gao Zhisheng’s case,” Geng said.

His wife and two young children live in California, where they escaped to in 2009, fleeing China through Thailand.

Geng, with translator Sherry Zhang and lawyer Jared Genser, will be meeting with State Department, White House, and Congressional officials while in Washington, telling them about what has happened to Gao for the last five years, and asking them to help secure his release.

Five years of solitary confinement in a small room with no sunlight, no human contact, and a diet of rice, water, and cabbage have destroyed Gao Zhisheng’s health.

He was put under round-the-clock surveillance, and the guards that monitored him were under strict instructions not to say a word.

“Having no access to the outside world, held in a dark cell without sunlight 365 days a year, 24/7, I don’t think any of us can begin to imagine the suffering,” said Jared Genser, who acts as a pro bono lawyer for Gao and Gao’s wife, Geng He.

Gao also lost around 50 pounds while he was in detention.

Perhaps the most well-known account of Gao’s torture took place in July of 2007, when he was kidnapped by security officials and tortured for around 50 days, including by having his genitals pierced by toothpicks, and burning cigarettes held near his eyes.

But Geng said that she recently found that from April 2010 to December 2011—just before he was thrown in Shaya Prison for three years—Gao was detained in the basement of a secret military base, and tortured worse and more cruelly than in 2007, she said. The details of this episode are not yet known.

Another Chinese human rights hero was present at the press conference, Chen Guangcheng, the blind human rights lawyer who was successfully rescued from China in May 2012.

“I think that America and other countries definitely have enough power to resolve this issue,” Chen said in an interview with Epoch Times. “I hope activists in China also go to visit Gao Zhisheng, just like they came to visit me. That will expose the multi-faceted evilness of the Communist Party to the world.”

He also remarked: “The treatment of Gao Zhisheng is a classic, clear case, that shows to the world the evilness of the Chinese Communist Party.”

Genser, the lawyer, said that the U.S. government ought to take an interest in Gao’s case on basic humanitarian grounds, and out of a sense of responsibility for U.S. values, and because Gao’s wife is a political refugee in this country.

“My hope is that with greater and more intense public pressure, other governments, human rights groups, the media, will shine a bright light on what’s happened to Gao… and enable the family suffering to come to an end.”

“The United States has a unique responsibility to Gao and his family to help enable a humanitarian reunification,” Genser said.

Sophie Richardson, the China director at Human Rights Watch, said that the abuse of Gao reflects wider issues about the rule of law in China that are in the interest of the United States to seek to resolve or reform.

“We see that the work of people like Gao Zhisheng is fundamentally consistent with what the United States says it wants in terms of change inside China, to make for a strong bilateral relationship.”