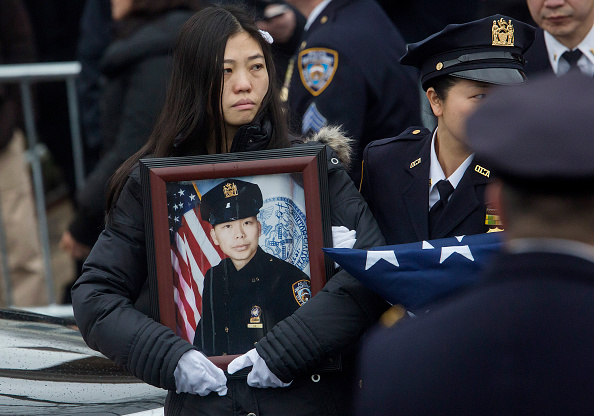 Pei Xia Chen, the widow of New York City Police Officer Wenjian Liu, holds his picture following his funeral service at Aievoli Funeral Home in the Dyker Heights neighborhood on Jan. 4, 2015 in the Brooklyn borough of New York City. Liu was killed with his partner Rafael Ramos on December 20, 2014 when the two were shot by Ismaaiyl Brinsley while sitting in their patrol car. (Eric Thayer/Getty Images)
New York

Almost three years after NYPD officer Wenjian Liu was shot to death while on duty in Brooklyn, New York, his wife gave birth to their first child.

After her husband was mortally wounded in 2014, doctors asked his wife if she would like his sperm preserved so she could still have his children.

The day Pei Xia was artificially inseminated, she had a dream that her husband, who looked like an angel, came to her with a baby and told her it was a girl, Dziergowski told The Post.

Pei Xia decided to call her Angelina after the angel in her dream, The Post reported.

The couple were married only three months when Wenjian Liu, 32, was fatally shot while sitting in a police car with fellow officer Rafael Ramos in Brooklyn on Dec. 20, 2014.

The attacker, Ismaaiyl Brinsley, appeared to be seeking for revenge for the deaths of Eric Garner in Staten Island, New York, although he wasn’t known as an anti-police activist.

“I’m Putting Wings On Pigs Today. They Take 1 Of Ours … Let’s Take 2 of Theirs,” he posted on Instagram with a picture of a gun.

Brinsley, 28, took his life after the shooting.

On that fateful day, Xiu Yan Li and Wei Tang Liu, lost their son and only child. The arrival of their their first grandchild Monday was especially meaningful for the couple.

“The parents [of Wenjian Liu] were very emotional, crying and holding the baby,” Dziergowski told The Post.