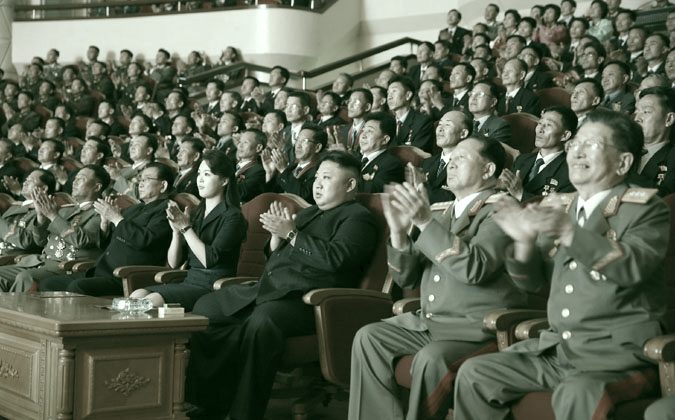 Ri Sol Ju appeared in public for the first time in months to join her husband Kim Jong Un at a party for the North Korean scientists who carried out the latest nuclear bomb test last Sunday.

Ri could be seen smiling and clapping beside Kim at the banquet which celebrated scientists and engineers who carried out what North Korea claims to have been a successful hydrogen bomb test on Sept. 3. The performances included choral pieces titled “Glory to General Kim Jong Un” and “The Glorious Motherland.”

According to an article in the official state media, the performers praised Kim Jong Un for his “undying feats” that guaranteed “the victorious advance and eternal future” of the nation “while stubbornly passing through untrodden snow” in developing nuclear weapons.

Ri’s absence from the public sphere in recent months fueled speculation that she may have been pregnant with Kim’s third child. The couple has two other children whose names and genders are classified.

North Koreans rarely have more than two children, so it is possible that Kim fathered a third child because the first two were girls and he needs a successor.

Last year, Ri was not seen in public for seven months. Some observers thought that she may have fallen out of favor with the dictator, while others thought she may have been pregnant before she reappeared in December 2016 for an air combat competition.

Kim broke with tradition by revealing his wife’s identity to the public and appearing with her at an event in 2012. His father and grandfather kept their wives hidden. After Ri appeared in public with Kim, state media started to refer to her as his wife.

The reclusive spouse appeared at a time of escalated tensions between North Korea’s communist regime and the free world over Kim’s relentless pursuit of weapons of mass destruction. Kim’s desire to develop a nuke capable of striking a remote enemy has continued unabated for years, even as millions in the country continue to starve and hundreds of thousands are feared to have perished in a massive system of forced labor concentration camps.

The United States was expected to ask the United Nations on Monday to freeze Kim’s assets, impose an oil embargo, and halt payments to North Korean migrant workers.

U.K. Secretary of Defense Michael Fallon said that his country is not under threat of a North Korean nuclear attack. Meanwhile, UN Secretary General António Guterres warned the recent escalation of tensions is the world’s worst crisis in years.