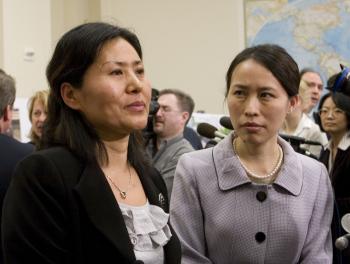 TESTIFYING: Geng He (L) at the Rayburn Building where she gave testimony about the persecution of her husband and family, on Jan. 18. (Lisa Fan/The Epoch Times)
China

By Matthew Robertson
Print
WASHINGTON—The last few weeks have been tough for Geng He, wife of Gao Zhisheng, a celebrated Chinese civil rights lawyer whose case came to the public again on Jan. 11. On that date the Associated Press published an excruciating testimony of his experience being tortured by Chinese Communist Party security forces. Nothing had been heard from him for the eight months prior.

Gao was targeted by the authorities in 2006 after he began defending Falun Gong practitioners. He wrote several open letters to the communist leadership detailing the torture of numerous adherents, and demanded they stop the “barbaric” acts. Then he was himself, over the years that followed, repeatedly kidnapped and tortured.

Like Gao, Geng He has suffered a lot too, though her’s is an emotional pain. She has been separated from her husband since January 2009, when she and their two children fled China through Thailand. The next month Gao was kidnapped again—he had been in and out of informal captivity since late 2006, after writing an open letter to the U.S. Congress about human rights in China—and has not been released since. He is not held according to any law, and authorities have repeatedly denied knowledge of his whereabouts.

She had flown to Washington from California on Jan. 18, attempting to deliver to President Obama a message he could act on when Party leader Hu Jintao was in town. She told him that her children could understand Obama’s fatherless childhood, and that she hoped he could do something to help.

“I hope you can do all you can to urge Hu Jintao to release Gao Zhisheng to come to the United States to unite with his family,” she said. “My husband is the backbone of our family.” It’s not known whether Obama got the message.

Ms. Geng spoke with The Epoch Times on the phone two days before, on Jan. 16. “We don’t know whether he’s alive or not, or locked up suffering even worse torture. I want the world to know that I, a normal family mother, suffered this level of persecution, and I want to arouse their interest and attention, I want them to know.”

As the authorities had their sights set on Gao for those few years in China, his family also became a target. “I and my children didn’t do anything, but they [secret police] were constantly harassing, beating, and abusing us.”

The daughter, Grace (or Gege in Chinese), could withstand the pressure from security agents when by herself, but not from peers. “The abuse and constant insults and bullying she got at school led her to almost a mental collapse,” Ms. Geng told The Epoch Times. Grace, 15 years old at the time, became suicidal.

Tianyu, the son, now 7 years old, was too young to understand the implications of what was happening. He was inconvenienced by the presence of the police though, who, after kidnapping his father, proceeded to occupy the family home. They muddied the rug, played TV loudly at night, and sent Grace and Ms. Geng to the brink of collapse; the latter was barely eating through the period; the quiet family unit had been irreparably ruptured.

Along with their own suffering, the family also had to bear the knowledge of what was being done to their husband and father.

In their own words the authorities had set their most sadistic security forces onto Gao. “Uncles” in the Public Security Bureau had “specifically and carefully” chosen his torturers, Gao writes in a 2007 letter describing the ordeal. “I tell you the truth, these guys are experts in cracking down on Mafia guys. They are heavies,” one of Gao’s tormentors told him before they slammed his face into the ground, then stretched his arms out and used toothpicks to pierce his genitals.

“Gao doesn’t compromise, so they hate him even more for that,” Ms. Geng said. “That man lives in a world of morality and conscience. They threw torture and torment at him, worse and worse each time,” Ms. Geng says.

“They say he’s a nuisance, that he doesn’t fear any torture. They said he’s not a man, that he has no feelings when they abuse him, when they hit him and torture him they would repeat this,” Ms. Geng said.

She thinks he was blessed to survive the torture, and that his spirit will elevate for what he had done and been through.

Jay Nordlinger, a columnist and senior editor of National Review, recently drew attention to the U.S.’s lack of response to Gao’s case. “At the beginning of this administration, Secretary of State Hillary Clinton, traveling in Asia, said that human rights would not be allowed to ‘interfere’ with such urgent issues as ‘the global climate-change crisis.’ This week’s pomp in honor of Hu Jintao proves that the administration is true to its word: Human rights sure as hell aren’t interfering.”

But Ms. Geng still holds out some hope. However it happens, she said toward the end of the interview, “I believe that justice will ultimately triumph over evil.”