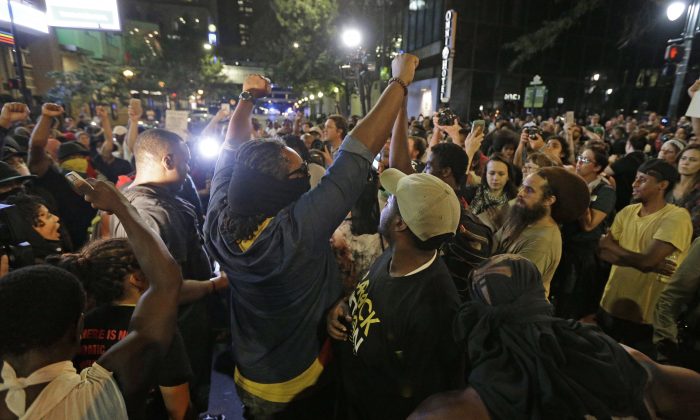 The wife of Keith Scott recorded the moments leading up to the shooting by the police in Charlotte, North Carolina.

A video of the incident was released to several media outlets on Friday, including his wife’s pleas to her husband not to exit a truck and telling the police not to shoot him. The video doesn’t actually show the shooting take place.

Scott’s death triggered protests and riots across Charlotte. Police said that he had a gun, while his family claimed he had a book when he was shot.

“Don’t shoot him. He has no weapon … he ain’t do anything,” his wife can be heard in the video. “He’s not going to do anything to you guys … he just took his medicine,” she said.

Seeing what I’m seeing here? Slow down the video, it appears that the officer in red reaches in his pocket and tosses a gun. #KeithScott pic.twitter.com/98TC0wenkf

As the encounter apparently escalates, she repeatedly tells police, “You better not shoot him.”

After the shots are heard, Scott can be seen lying face-down on the ground while his wife repeatedly says “he better live.” She continues recording and asks if an ambulance has been called. The officers stand over Scott. It is not clear if they are checking him for weapons or attempting to give first aid.

A transcript of what she said reads as follows:

“Don’t shoot him. Don’t shoot him. He didn’t do anything.”
In the background, officers can be heard yelling, “Drop the gun.”
“He doesn’t have a gun. He has a TBI [a Traumatic Brain Injury]. He’s not going to do anything to you guys. He just took his medicine.
“Keith, don’t let them break the windows — come on out the car.
“Keith, don’t do it.”
“Keith, get out the car!”
“Keith, Keith, don’t you do it. Keith! Keith! Don’t you do it!
A burst of gunfire is then heard, with at least three shots fired.
“Did you shoot him?!” the woman yells. “Did you shoot him??”
Repeating her question, she says, “He better not be [expletive] dead!”

Later, as she walks up to the scene, three officers could be seen around Scott—two standing near him and another kneeling over him.